“This is probably the crème de la crème of festivals,” said Beverly Vinch, of Washed Ashore Jewelry, based in Avon Lake, Ohio. “We were super-stoked when we learned about its being held on Lake Erie.”

Vinch, who creates beach and sea glass jewelry with her sister in-law, said the pieces found on Lake Erie are just as good as beach glass found on the nation’s saltier coasts.

“And to be honest, the Great Lakes were a huge dumping ground for everybody’s garbage,” she said. “Bay Village used to take their garbage out seven, eight miles and dump it. That was way before the EPA was around, so we have a huge resource here.”

While decades of dumping trash directly into the lake sounds terrible – and it was – it managed to produce plenty of sought-after items. Since there were few plastics being discarded 50 or more years ago, the garbage disappeared. The organics and papers quickly, the metals much slower, with most rusting away to nothing within a decade.

But the glass remained. 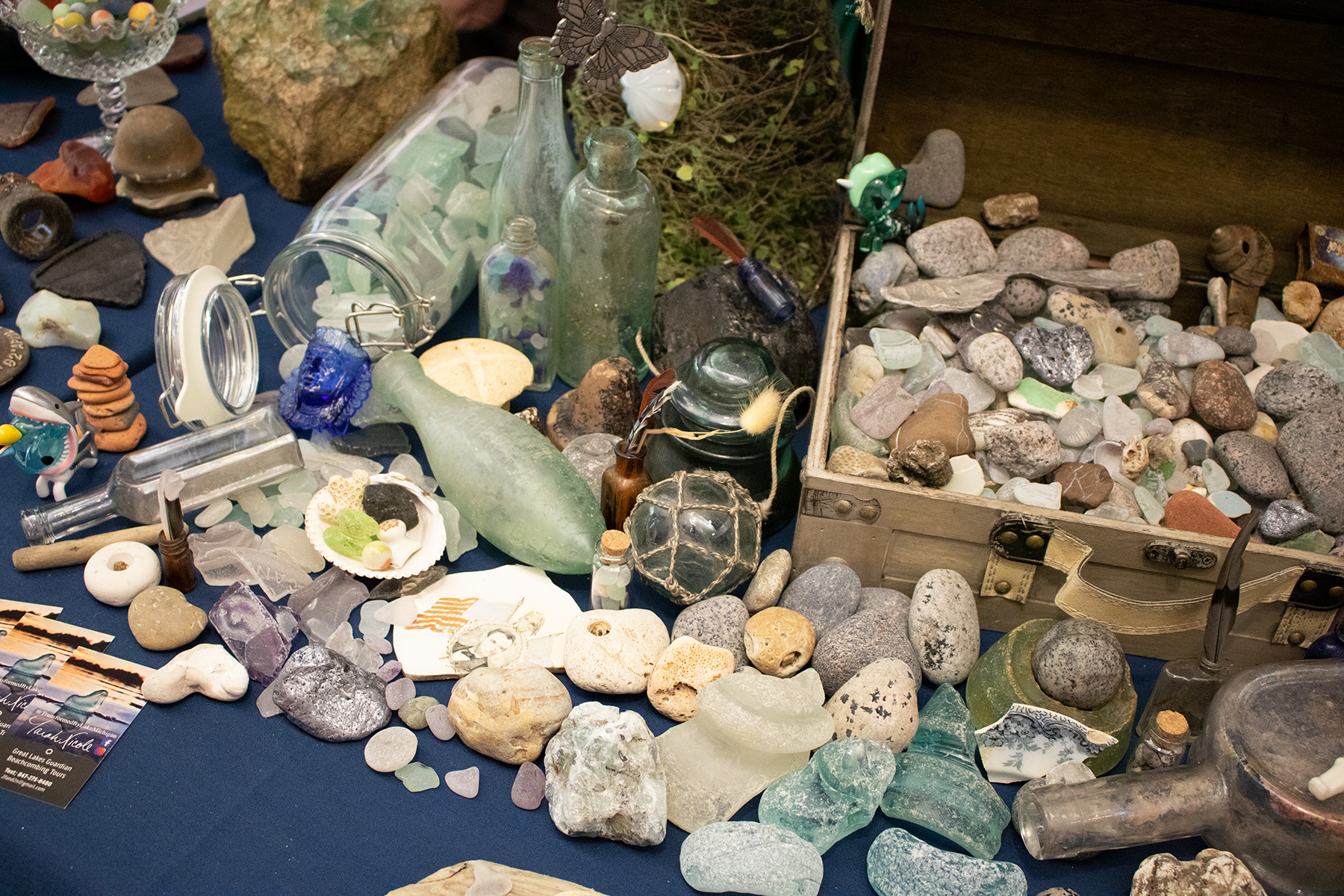 More than glass is waiting to be discovered at water’s edge. Common finds include unique rocks, worn pieces of brick, fossils and anything glass or porcelain. (Photo Credit: James Proffitt)

Treasures of the Great Lakes

The Great Lakes have so many treasures, which was the exact theme of the festival, according to Roxann Williams, festival director. She said the NASGA mission is more than just hanging out or having vendors sell sea glass jewelry and artwork.

“Our non-profit organization’s focus is education about authentic beach glass and to learn about history and the origins of what things people find,” she said, emphasizing “authentic.”

So, is there fake beach glass? The answer is yes.

“Absolutely,” Williams said. “Our members support the preservation and education of authentic beach glass, so all must use authentic pieces in their work. They’re all about the authentic part and all our members are juried in, so we don’t just accept anyone as a member.”

NASGA currently has about 75 members from many states, overseas and the Caribbean. And all, she said, know fake glass when they see it. It usually comes from a rock tumbler.

“You can always identify authentic sea glass by the textures and cuts in the glass,” Williams said. “It does depend on where it’s found because different places in the world could produce frosting a little differently, but those are two defining qualities: the frosting on the glass and the little cuts in the glass.” 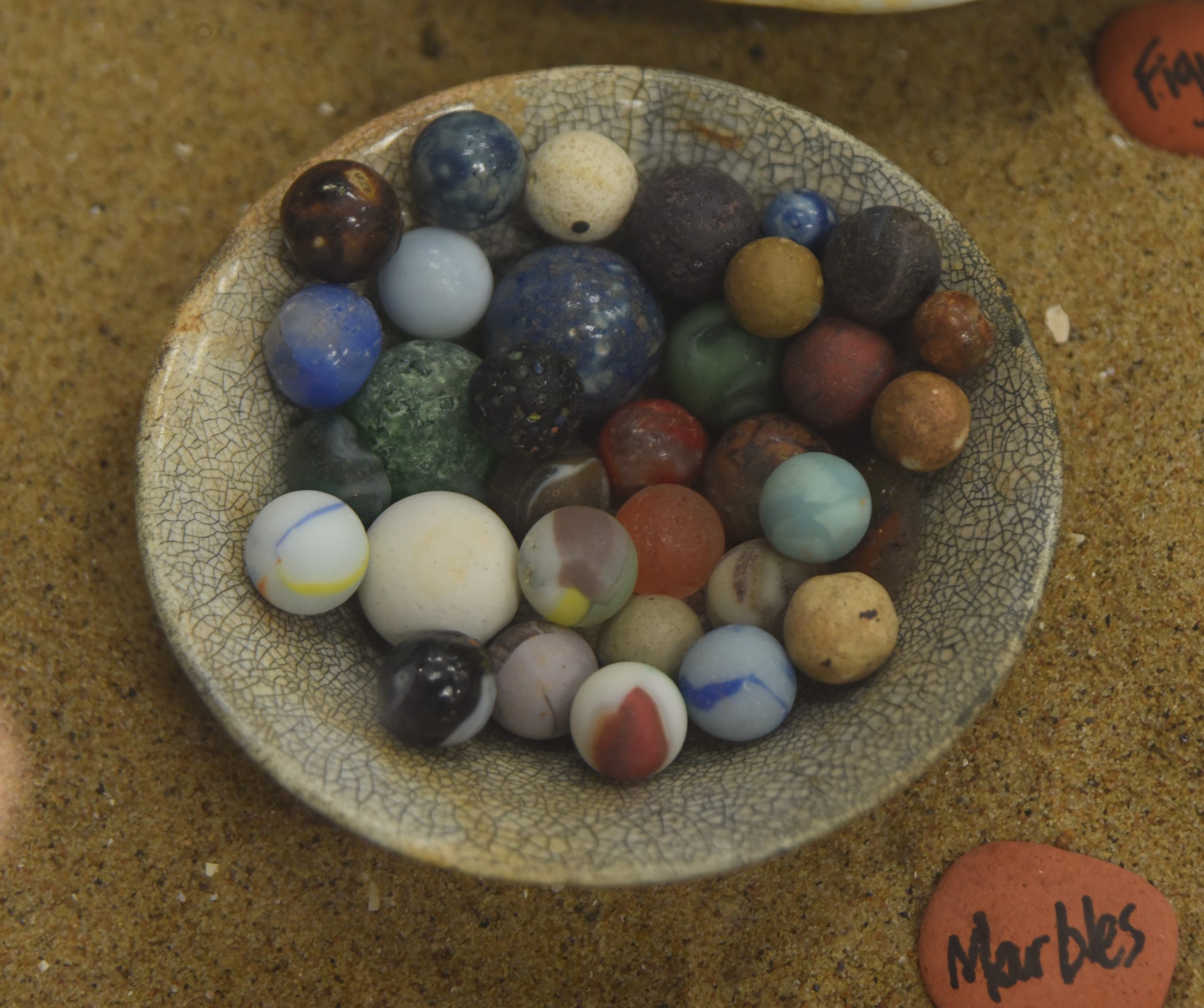 Have you lost your marbles?

“Marbles is the most popular game in the world and there are more marbles sold than all other toys combined,” said Michael Cohill, director of The American Toy Marble Museum in Akron.

And decades later, or even a century later, when lost marbles are found, they bring joy.

“At one time there were 34 marble companies in Akron,” Cohill said. “It was the marble capital of the nation. The first mass-produced toy marble came in 1884 and the last marble company in Akron closed in 1951.”

Municipalities would dump their garbage into a nearby stream or river, he said, echoing Vinch’s story about Bay Village. After the organics, rubbish and metal disappeared at the hands of time and nature, only glass remained and that included lots of marbles. They didn’t end up in the trash by getting thrown way intentionally, he said. Rather, most often children put them there. With slingshots.

Cohill’s presentation afforded standing room only, and he was peppered with questions before and after he spoke.

“It’s rare to find a marble, but they are there,” he said. “Forever there’s been a category of marbles called frosties, and if you look at one closely you will see that it’s absolutely uniform in its frosting. But if you were to find one on the beach there would be tiny sparkles and little spots that you would never see in an intentionally frosted one. And the festival-goers all told me they can spot a fake a mile away.”

Cohill said anywhere communities dumped their trash in the water, there are marbles to be found. 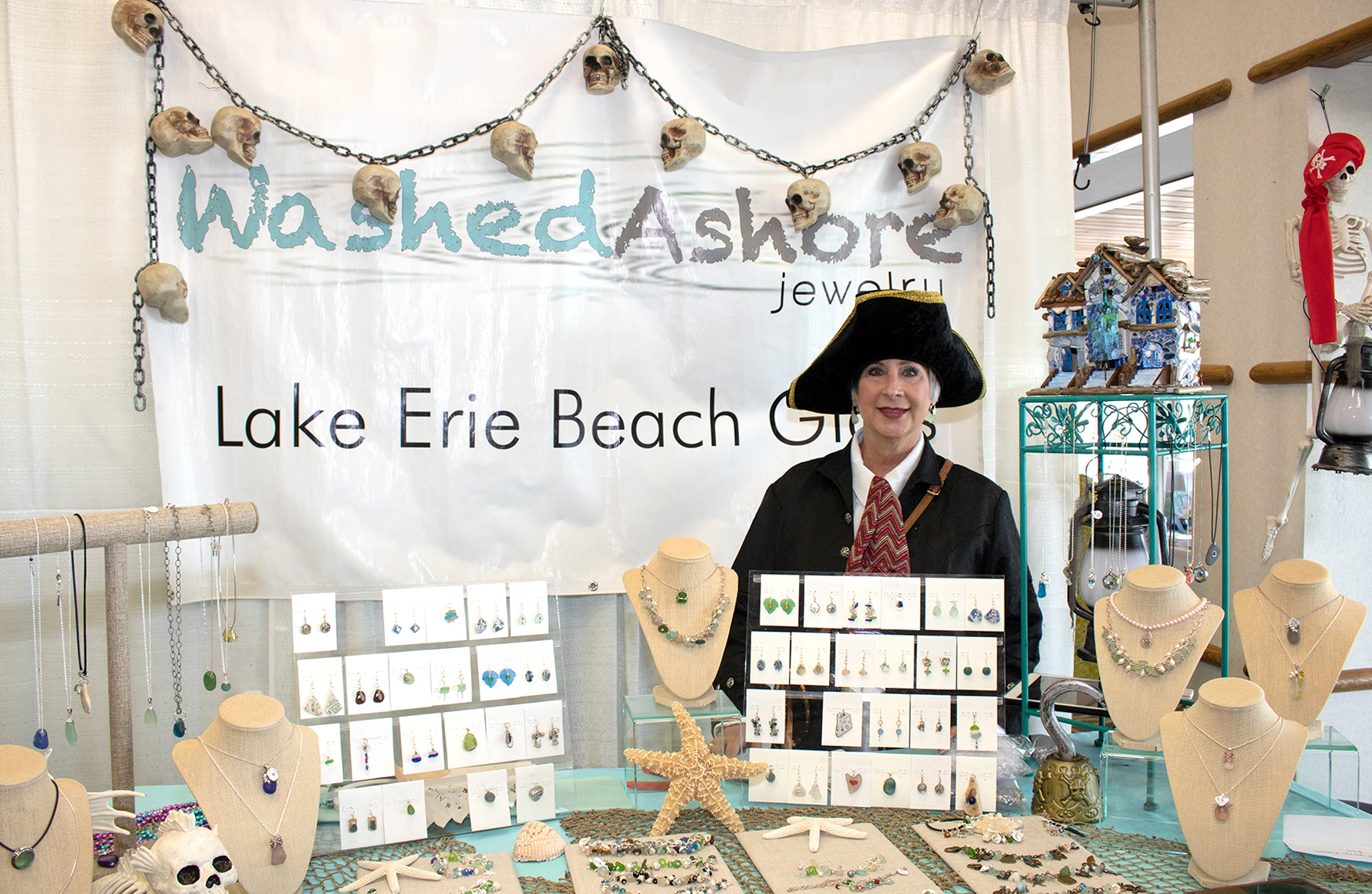 Beverly Vinch of Washed Ashore Jewelry, poses with some of her and her sister-in-law’s creations at the 2022 North American Sea Glass Association festival. (Photo Credit: Cindy Van Cleve)

Williams said that in recent years, collecting beach glass has become a rather popular pastime. All you need is a beach, or even a riverbank.

“I have collected river glass, and it’s really cool because it teaches the history of the area, especially if you research the area where you search, if it’s near old glass factories or shipping areas,” she said.

“It’s a hobby that transcends all socio-economics and ages. We have doctors and dentists that make jewelry, we have retired grandmas like me that collect as a hobby, and we have young children involved in it,” Williams said. “It’s not very strenuous, and it’s easy and educational.”

Vinch said she and her sister-in-law’s business began decades ago with her husband’s family. During their childhood in Lakewood, the kids spent long hours on Lake Erie shores playing and collecting glass. When the family sold the home, there were huge containers of beach glass in the basement.

“Since I had been dabbling in making jewelry I said, ‘Let’s see if we can do something with this,’” she explained. “We do mostly shows, and we try to stay mostly around Lake Erie or any of the Great Lakes. It seems like the further you get away from the lakes the more people don’t understand what you have and how special it is.”

Vinch said it takes at least 20 to 30 years for a broken piece of glass to become coveted beach glass. And finding a special location is a super-bonus in the hobby, like the private Lake Erie beach her husband had access to. GLN was bold enough to ask her for the location.

“Uh, I cannot give you that information,” she said, laughing. “Sorry.”

When it comes to Holy Grail colors, Vinch said orange and red are the ones.

“Those are the two most hard-to-find pieces. With orange you might find one in every 15,000 pieces collected because they just didn’t use orange for a lot of things if you think about it, probably a piece of art glass or some type of ash tray or candy dish,” she said. 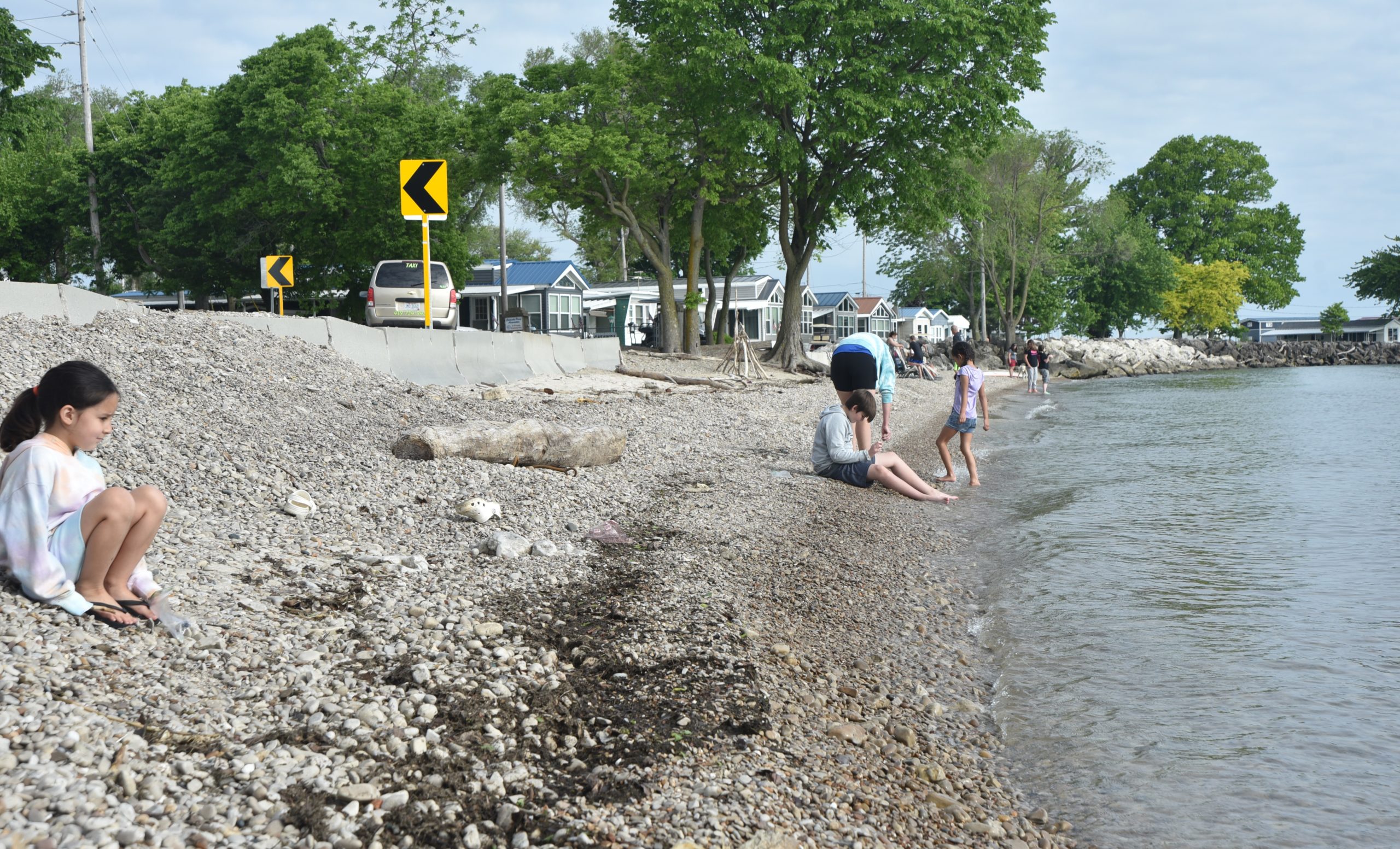 A magazine just for beach combers

“We just published our 30th issue of Beachcombing,” said publisher Kirsti Scott, of Capitola, California. “It originally started in Buffalo, on Lake Erie.”

According to Scott, the Great Lakes are particularly rich grounds for beach combers due to a number of factors.

“A tenth of the U.S. population lives in the Great Lakes region, and they’ve been there for hundreds of years,” she said. “And for all that time huge shipping’s happened, railroads and ships. There’s more shipwrecks per square mile in the Great Lakes than any other place in the nation and people in older times threw things away, which meant in the water, so there’s just a whole lot of stuff.”

Scott, who is on the board of the NASGA, said she’s been pushing for a Great Lakes conference and festival site for years.

“I feel like a lot of people on the coasts and in other countries feel like you can only get beachcombing and sea glass and that stuff on oceans, when there is a huge population that beachcombs on the Great Lakes, just fabulous stuff.”

As an example, she cited the biggest beach glass find of all time: a 275-pound piece found on a Lake Erie beach in 2017. It has been pondered by museum officials and beach glass experts.

“They just don’t know what it was, no one knows,” Scott said of the clear glass piece, which is 12 inches tall and 64 inches in circumference.

And when it comes to marbles, Scott said, they were used as toys were mostly made in the Great Lakes states. But industrial marbles can be found, too.

“Anytime anyone goes beachcombing on the coasts, they have to go at low tide but on the lakes, people go anytime they want,” Scott said. “The bottom line is it’s a great, healthy fun hobby and it’s free if you live near the water.”

To see the original report and read related stories, follow this link to the Great Lakes Now News website.