The 2022 legislative session came to an inauspicious end when Minnesota lawmakers missed their midnight Sunday deadline for passing bills. Plans for cutting taxes and spending what remains of the state’s big surplus didn’t reach the finish line.

It’s up to Gov. Tim Walz to call a special session, and while a week ago he insisted he would not do that, he now supports it.

“They indicated that they think their members need a little bit of time to decompress. I agree with them,” Walz said. “They think maybe getting out of this bubble they talked about, to go back to listen to Minnesotans, because I’m hearing pretty clearly from Minnesotans ‘give us the money back from this’ and invest in the things that make our lives a little easier. It shouldn't be that hard. We can get win, win, wins across the board.” 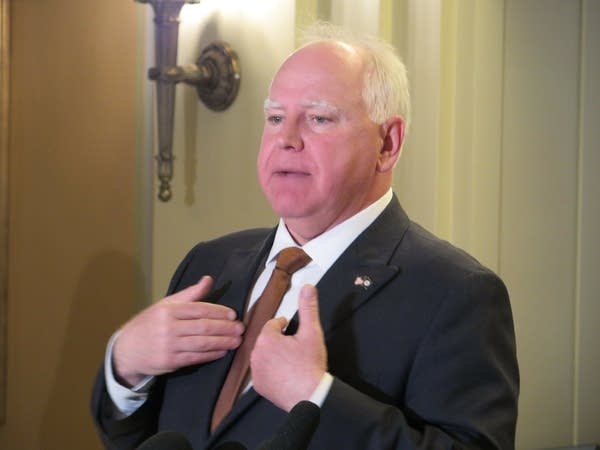 Gov. Tim Walz spoke with reporters Monday afternoon after meeting with legislative leaders to talk about the possibility of a special session. Tim Pugmire | MPR News

Walz said he would not call lawmakers back without an agreement on the bills that would pass.

The governor and legislative leaders announced an agreement last week for a budget framework that would cut taxes by $4 billion, spend $4 billion on programs and leave $4 billion unspent. But negotiators were unable to agree on the details to fill in that framework. Walz said he believes they’re close.

Hortman didn’t comment after the Monday afternoon meeting, but she said early Monday she was ready to keep working.

“There are a few bills that are very close, but we don’t yet have agreement,” Hortman said. “The Minnesota House is ready to come back and get the work done.”

Miller also did not talk after the afternoon meeting. In the early morning hours Monday, he expressed disappointment in the way the session ended. He also suggested waiting until next year to try to resolve the tax and spending issues.

“We’re happy to continue these discussions. But the reality is, as I said earlier today, as I said yesterday and the day before, we’re not interested in a special session,” Miller said. “For goodness sakes, get your work done on time.”

Political sniping was mostly on pause inside the Capitol Monday, but the Republican-endorsed candidate for governor, Dr. Scott Jensen, was on hand to gather with supporters after officially filing for office.

Jensen said he supported the tax cuts lawmakers had proposed, but not the increased spending.

“We don’t need more spending. Right now, we need to be more frugal with our money,” Jensen said. “Let’s go ahead and have the election in November, and then in November we’ll decide who’s going to be there in January. Then let’s have a full exploration of this.”

Lawmakers could no longer pass bills Monday, but the House and Senate still met on the final day of the session to hear from members who are retiring or leaving to seek other offices.

In the House, there are at least 34 members who are retiring or leaving to seek another elected office. The number in the Senate is 22.

“This is a place of ideas and hope,” she said. “Let’s keep giving Minnesotans hope that we can work together for a Minnesota that is welcoming, fair and just.”

“You are amazing, and you show up here every single day with the commitment to do the right thing for this state.”