Work at Capitol not done as session deadline passes The Minnesota Legislature missed a midnight Sunday deadline to pass major legislation on spending and tax cuts. Democrats said they hoped Gov. Tim Walz would call a special session so that they can continue working.

“It would be best if we came back before Memorial Day weekend,” House Speaker Melissa Hortman, DFL-Brooklyn Park. “The Minnesota House is ready to come back to get the work done.”

Republican leaders in the Senate rejected that notion, and said the work could continue next year.

“The reality is the deadline was midnight, and that deadline has come and gone,” said Senate Majority Leader Jeremy Miller. “We’ve had members of the Senate working darn near around the clock for a week. What is one or two more days going to do?”

Gov. Tim Walz indicated he was open to a special session to finish the work after there is an agreement on the outstanding bills. He said he would meet with legislative leaders later Monday.

“You don’t get the ball to the one yard line and go home. You finish the job that Minnesotans expect us to do,” Walz said. “A lot of compromise happened today. A little bit more will bring this thing home.”

Negotiations over public safety, education, health care, housing and other major issues weren’t resolved when the midnight deadline struck. The Republican-controlled Senate then ended the regular session, while the House will return Monday for a ceremonial last day.

Miller, R-Winona, said Democrats in the House delayed too long and seemed unwilling to negotiate seriously.

“We worked tirelessly on an agreement on public safety,” Miller said. “Unfortunately we couldn’t get there.”

Some bills did pass on the final day.

Lawmakers gave final approval to a drought relief, avian flu and broader agriculture funding package. The bill contains tens of millions of dollars for expanding high-speed internet lines to more places without it, some using federal money and some from state resources. The plan marked a minor victory as far-bigger plans were in flux.

A mental health bill that combined several proposals that had been considered by the House and Senate passed Sunday.

"The whole goal of this bill was to give more access so we do not hear stories from our constituents that they had to drive six or eight hours to find somewhere for their loved one to get treatment,” he said.

The bill also is designed to help close gaps in the criminal justice system to address the mental competency of defendants to stand trial. The Senate passed the bill unanimously. The vote was closer in the House, 68-60.

And Walz signed a bill that will allow larger craft breweries in the state to sell growlers on site.

House Speaker Melissa Hortman, DFL-Brooklyn Park, was more resigned to a scenario where overtime would come into the picture. She told MPR News early on Sunday via text message that she was open to extending the session.

“If we are able to get agreements in all the issue areas by the end of the regular session, I will ask the governor for a brief special session to process the results,” she texted before 8 a.m.

A budget framework announced last Monday would put $8 billion of a projected surplus into action: About half each in tax-reduction efforts and half into new spending.

At the time, Walz and leading lawmakers were confident it would all come together, even though divided-party control of the Legislature has had a track record of stumbles.

The roughly $4 billion tax bill was one area where negotiators did agree. It would fully eliminate any state tax on Social Security benefits, reduce the bottom income tax rate by a quarter of a percent and beef up renter credit programs and local government aid in hopes of easing the property tax pinch.

But House DFL leaders held off on a vote on the package hoping that the education bills and other areas could be completed.

Senate Minority Leader Melissa Lopez Franzen said it wouldn’t be acceptable to only ratify part of the agreement.

“The global agreement outlined tax relief, funding for our students and schools, funding for long-term care and seniors, public safety investments and a job-creating bonding bill. We cannot do one, without doing them all,” she said in a written statement. “I urge my Republican colleagues to live up the agreement they made."

The education bill was mired in a back-and-forth over the amount to put toward literacy programs, special education costs and mental health offerings in schools. Public safety negotiators were in a showdown over how much to put toward law enforcement versus community-driven crime prevention outreach. And the health bill is where debate over nursing home and child care funding is taking place.

Sen. Jim Abeler, who is part of the health and human services talks, said earlier in the day Sunday the chances of a quick deal there were “remote.” But he said even that sliver of a possibility would keep him at the table.

“I remember the story of Rich Strike,” the Anoka Republican said, invoking the out-of-nowhere Kentucky Derby winner. “We’re going to be Rich Strike. I’m an optimist, but it’s a long-shot.”

Miller, the Senate leader, said the sides were far apart on that bill.

House Minority Leader Kurt Daudt, R-Zimmerman, said he was uncomfortable with the amount of new spending in the agreement as the economy starts to show signs of weakness. He said he would ask to rein in that spending before he consents to a smooth special session.

Only governors can call special sessions, but lawmakers dictate how long they go. And minority caucuses can lengthen them by requiring bills be held over for a few days and they can offer amendments to bills that would add hours or days more to the process.

Daudt said he’s not sure a special session would even come together.

“I'm not optimistic about there being a special session. And I think that's okay. We fully funded the state government last year. Yes, there are some things that we should do this year,” Daudt said. “But ultimately, if we have to do all of the things they agreed to in their budget targets, their joint budget targets, it'd be better off for the state not to do a special session now and we can pick that work up right away in January of next year.”

Meanwhile, retiring lawmakers began their goodbyes. Dozens will retire this year and it’s tradition that they give farewell speeches. 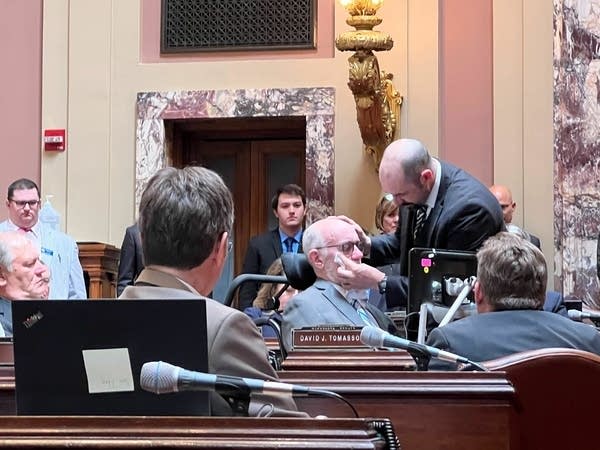 A son of Sen. David Tomassoni, I-Chishom, wipes the face of his father as he gives an emotional retirement speech. Tomassoni is battling ALS.
Brian Bakst|MPR News

Sen. David Tomassoni, a legislator since 1993, got things going with an emotional speech. Tomassoni, an Iron Range independent who spent most of his time in office as a DFLer, is leaving as he battles ALS. He spoke through a computer-assisted speech technology, receiving standing ovations before and after and brought some colleagues to tears.

“I treasure the time I have been able to work in the Senate. And I use the word work because this is serious business,” he said. “Doing the people’s work comes with a lot of personal sacrifice and responsibility and is often times hard on family. But it also has its allure.”

“Thirty years went by fast,” Tomassoni said at the end, as one of his sons wiped a tear from his father’s cheek.