Leesa Kelly, founder of Memorialize the Movement, shows some of the artwork in the group's collection at a temporary storage space in northeast Minneapolis on May 16. Photo: Matt Sepic | MPR News

At the Northrup-King Building in northeast Minneapolis, Leesa Kelly heaves open the door to a storage room at the end of a rusty, century-old loading dock. An otherwise drab and dim space explodes into bright color — from hundreds of murals painted on four-by-eight sheets of plywood.

Kelly, 29, founded Memorialize the Movement nearly two years ago to save the paintings that artists created during the week of heartache and rage that followed the police murder of George Floyd. 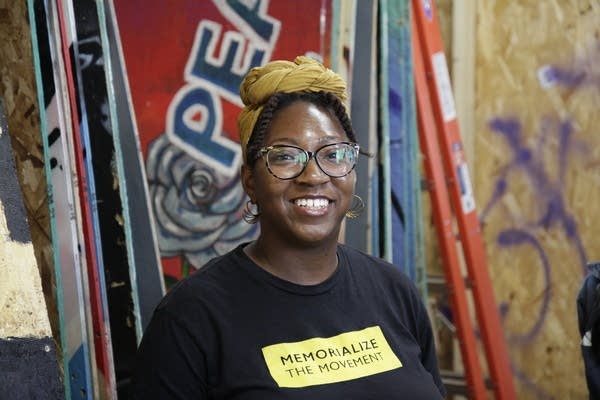 Leesa Kelly, founder of Memorialize the Movement poses for a photo in northeast Minneapolis on May 16. Photo: Matt Sepic | MPR News.

For a second year, Minneapolis artists are marking the anniversary of George Floyd’s murder with an exhibit of paintings they created during the unrest in the days that followed.

As businesses began to reopen that summer, a group of volunteers collected the plywood that had protected store windows. The panels include portraits of Floyd, as well as murals and poems. The group behind this effort is expanding into other projects and creating new art.

Kelly, who is Black, knew immediately that the effort had to be Black-led. Her first step in saving the panels was to post signs telling galleries and collectors not to take the art.

Memorialize the Movement started with friends moving the plywood murals in borrowed pickup trucks. Kelly has since created a nonprofit that organizes community events and small workshops for young artists. In August, the group loaned four dozen murals for a show at the Watermill Center on New York’s Long Island.

On Saturday, Memorialize the Movement is mounting its second exhibit marking the anniversary of Floyd’s murder. The theme this year is “Justice for George: Our Strength, Our Story.”

Semhar Solomon flips through the four plywood panels that comprise a mural that she painted in 2020 to mark the fourth anniversary of Philando Castile's killing by a St. Anthony police officer.  Photo: Matt Sepic | MPR News.

“We really wanted to focus on where we are now and highlight and celebrate how far we’ve come in this movement. And so acknowledging our strength, our resilience and everything we’ve been able to accomplish but continuing to own and reclaim our stories and continuing to be the stewards of those stories,” Kelly said.

As it did last year, the event will include live painting of new works along with a respite space with Black mental health professionals on hand.

New this year is a one-man play. Citizen James explores writer and activist James Baldwin’s move to Paris at age 24 to flee American racism in 1948.

One of the new artists exhibiting work this year is Semhar Solomon. The 18-year-old from St. Anthony is an intern with Memorialize the Movement. In 2020, the spontaneous eruption of visual art created in Floyd’s memory inspired her to paint a four-panel mural honoring a Black man killed by police in 2016.

“My piece is “Philando Castile: Rest in Power” to Philando Castile and many more. It was the four-year anniversary of his murder. I started a rally and I wanted to have a showcase piece,” Solomon said. 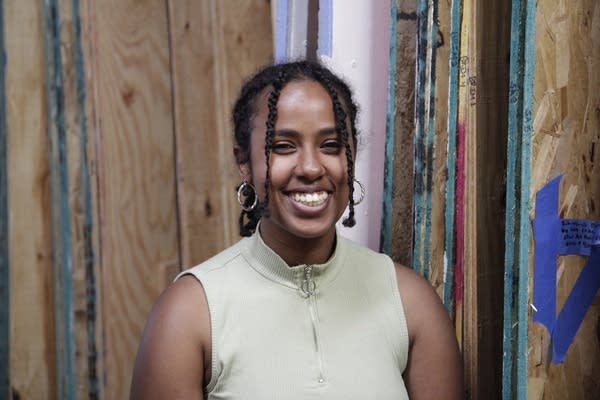 The Memorialize the Movement exhibit is scheduled for Saturday from noon until 8 p.m. at Phelps Field Park at 39th Street and Chicago Avenue in Minneapolis — a block south of George Floyd Square. The organizers are looking for volunteersto help set up and take down the 70 plywood pieces.

After this weekend, the group will continue its community outreach efforts and the search for a permanent space to both store and display a collection that’s grown to an estimated 1,000 panels.

To listen to the audio version of this story and read related stories, follow this link to the MPR News website, https://www.mprnews.org/story/2022/05/20/artists-memorialize-the-racial-justice-movement-that-floyd-...