By Mark Zdechlik from Minnesota Public Radio News - May 20, 2022

Gov. Tim Walz has the Minnesota DFL Party’s endorsement for his reelection campaign.

DFL state convention delegates backed Walz by acclamation and roared as the first-term governor hoping for a second term took the stage at the Mayo Civic Center in Rochester Friday night.

Walz said Democrats have a winning message this fall despite Republican rhetoric.

Walz criticized some of the rhetoric Jensen used at the GOP convention. 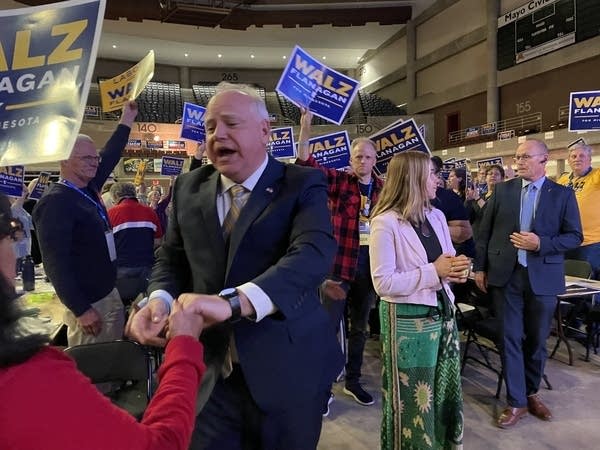 Gov. Tim Walz makes his way to the stage at the Mayo Civic Center in Rochester to accept the DFL endorsement for his reelection campaign on Friday. Photo: Mark Zdechlik | MPR News

"When our opponents stood on the stage and threatened to jail one of the most honorable and effective public servants this state and country has ever seen in Secretary Steve Simon, they've told you what they believe,” Walz said. “When they stood on this stage, and promised to defund public schools, believe them."

DFL Party chair Ken Martin called Jensen “dangerous” and said Democrats are strongly positioned going into the fall election, even though the party that controls the White House typically struggles in midterms.

"This far-right lurch by the Republican Party towards authoritarianism in this country is really backfiring,” Martin said. “Whether it's the insurrection on the Capitol on Jan. 6 trying to overturn a free and fair election to now a complete erosion of fundamental rights in this country over a woman's right to make decisions over her health care."

Martin was referring to the leaked Supreme Court decision that indicates a five-member majority on the Court is poised to overturn Roe v. Wade, the 1973 court decision that made abortion legal in the United States.

Republicans dispute the contention that Democrats are in a strong position.

“In Tim Walz’s Minnesota, crime is on the rise across the state, inflation is at record highs and supply chain shortages make it hard for families and businesses to make ends meet with basic everyday necessities like gasoline, baby formula and more,” Republican Party of Minnesota Chair David Hann said in a statement. “We welcome the coming campaign and are going to work hard to elect Dr. Scott Jensen and the rest of our Republican ticket to take Minnesota back from the failed policies of the Democrats to make our streets safer and our schools and economy stronger.”

To see the original report and read related stories, follow this link to the MPR News website. https://www.mprnews.org/story/2022/05/20/dfl-endorses-walz-for-second-term
News