A print of a brook trout created by artist Matt Wagner. It's part of the exhibit "Animals of the Driftless," on display at the Winona Arts Center in Winona, Minn. Image: Courtesy of Matt Wagner

As Matt Wagner read aloud to his young son last year, one of the toddler’s favorites was a board book of animals: Elephants, cats, hamsters — pictures of random creatures of all kinds.

But as happy as the Winona artist and teacher was to have found a go-to book for his son, something nagged at him.

“I thought, ‘I wonder if there’s a collection of animals that exists locally and regionally that I could read to my son,’ “ he recalled. "And these could be animals that he can see more often. And then he could relate to them. We could read about it and we could go out and take a hike and run into some of these animals. And after doing some research with that, I found that there wasn’t a lot.”

While there certainly was artwork depicting animals found locally, when it came to a collection aimed at kids, “there really was nothing that existed quite like that.”

Wagner’s solution: Create his own artwork for a prospective book, celebrating some of the diverse creatures found on the bluffs and in the lowlands of southeastern Minnesota's scenic Driftless Area.

That’s the inspiration for “Animals of the Driftless,” an exhibit of black-and-white prints created by Wagner, on display at the Winona Arts Center through the end of June. The gallery is open Wednesdays and Sundays. 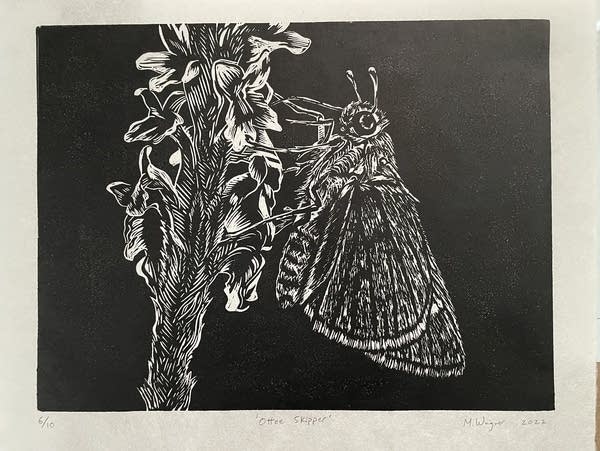 A print of an Ottoe skipper butterfly, created by artist Matt Wagner. It's part of the exhibit "Animals of the Driftless," on display at the Winona Arts Center in Winona, Minn.
Courtesy of Matt Wagner

The Driftless Area was left relatively untouched by glaciers during the last ice age, resulting in steep bluffs and deep valleys.

“The region is so beautiful. It’s got such geographically unique areas to explore. You’ve got the bluffs high up, and you’ve got the backwaters really low. And there’s just a great diversity and opportunities for being outdoors,” Wagner said. “So I thought that it would just be a great way to showcase that and a great way to celebrate the animals here. And now having a (young son) and just kind of seeing things through his eyes a little bit — it’s been fun to go back and kind of take a second look at the beautiful nature we have.”

After getting the inspiration, Wagner applied for and received an emerging artist grant from the Southeastern Minnesota Arts Council, to create a set of prints.

The 12 prints now on display in the exhibit include images of a brook trout, a North American beaver, a timber rattlesnake and an Ottoe skipper — a butterfly listed as endangered in Minnesota. 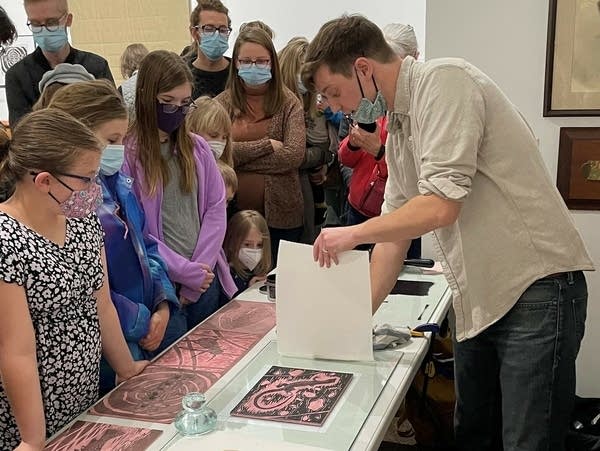 Artist Matt Wagner gives a print demonstration on the opening night of his "Animals of the Driftless" exhibit in April at the Winona Arts Center in Winona, Minn. Photo: Courtesy of Matt Wagner

Wagner consulted with friends who are knowledgeable about the local environment to create a shortlist of animals — a wide-ranging representation of animals that are important to the region.

Then Wagner picked ones that would work best for creating prints — a specific species of dragonfly, for example, from 20 to 30 options.

Creating each carving to make the prints took about five to seven hours. Then there was the painstaking printing process, getting everything exactly right.

It's time-consuming, but Wagner, 32 — who's a graduate of Winona State University and now teaches art and work-based learning to grades 9 through 12 at the Winona Area Learning Center — said he's drawn to the history of printmaking. He also likes how it simplifies shapes and designs, and it gives him the chance to share his work with more people.

“If you spend 20 hours on a carving, you can at least make as many (prints) as you want to a degree, versus doing a really long drawing, and you just have the one,” he said. “And I just love kind of giving my stuff away, and sharing it, and just getting it out there for people to hang up.” 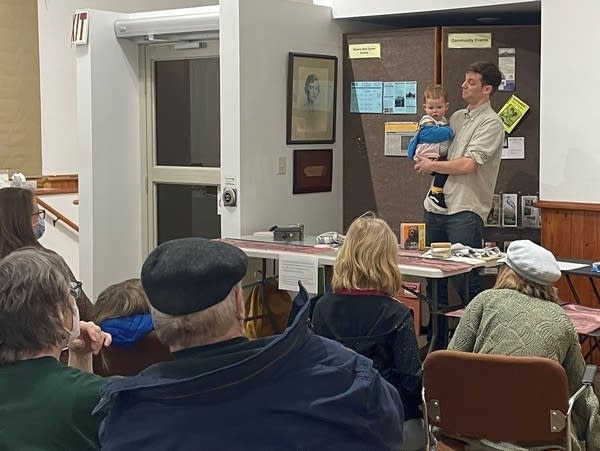 Artist Matt Wagner holds his son Beck as he talks to the audience on the opening night of his "Animals of the Driftless" exhibit last month. Photo: Courtesy of Matt Wagner

Wagner said he’s been pleased by the feedback he’s received about the prints since the show opened last month. He’s planning for another show this year at the Blue Heron Coffeehouse in Winona, and as for turning the prints into a book — “the gears are moving for that.”

“The opening of the exhibit, it was kind of surreal to see people walking around and admiring everything,” he said. “I just hope that it's an opportunity to maybe learn about an animal that they didn't know existed, that might be in their own backyard.”

The show also offers visitors a chance to hold and feel the carvings used to make the prints. That's something Wagner's son, Beck, has enjoyed, too — bringing the project back to the source of its inspiration.

To see the original report and read related stories, follow this link to the MPR News website. https://www.mprnews.org/story/2022/05/16/animals-of-minnesotas-driftless-area-are-the-stars-of-winon...