Captured smelt inside a cooler belonging to Johnny Thao of St. Paul on May 4 as seen while he was out fishing for smelt along Park Point on the shore of Lake Superior in Duluth - Derek Montgomery for MPR News
By Dan Kraker - MPR News - May 13, 2022

Smelt are a skinny little fish, only six to nine inches long - but they have a big, devoted following.

"Number one fish in my book,” said Johnny Thao one night last week on the sandy beach of Duluth’s Park Point along Lake Superior.

Thao drove up from St. Paul with his wife, uncle, and cousin for the annual smelt run. For a couple weeks in the spring, every night after the sun sets, thousands of the small, silvery fish swim into shore to spawn, and hordes of anglers flock to beaches and streams to scoop them up in nets.

Thao's made this pilgrimage north every spring for the past 15 years - half his life - because he's just crazy about smelt. He fries them up with the skin still on. They taste great coming out of the big lake, he said. Kind of like french fries.

"I snip off the head and then you just yank all the guts out with it and then do a quick rinse, batter and deep fry. You're golden," he said.

But you've got to catch a lot of them to make a meal. That’s fairly easy this time of year, when, after dark, big schools swim into the warmer water close to shore and into streams that feed into the lake to spawn. 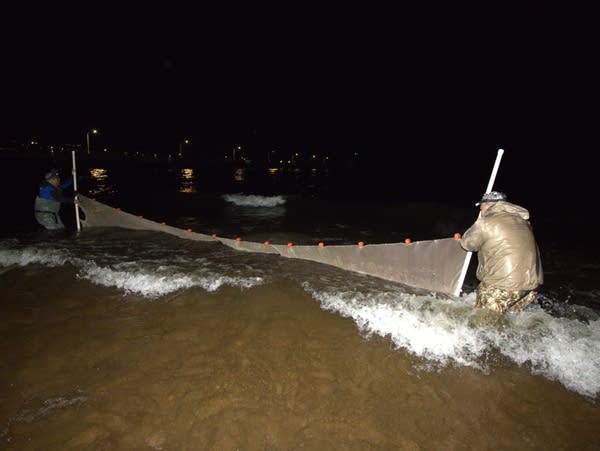 Johnny Thao (right) and Tao Thao (left) return to the shore with a seine net full of smelt May 4 along Park Point on the shore of Lake Superior in Duluth. Derek Montgomery for MPR News

Instead of catching them with a rod and reel, Thao and his uncle each hold one end of a 25-foot-long seine net.

When they get to shore, they lay the net down on the beach. It's full of dozens of teeming smelt.

Then, in a stomach-churning tradition typically reserved for smelting rookies, Thao bites the head off a smelt, and spits it away. 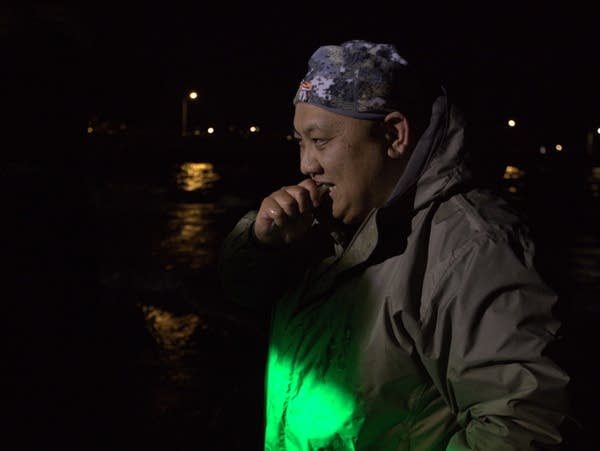 Johnny Thao bites the head of a smelt after returning to the shore with the first collection of smelt him and his friends caught. Derek Montgomery for MPR News

Groups of people line the shoreline with lanterns, portable heaters, and empty coolers they hope to fill with fish. They wear waders to stay warm in the 40-degree Lake Superior water.

People come for the fish, the camaraderie and the experience, said Julie Yang, who drove up the Twin Cities with her husband.

"It's beautiful out here at night, listening to the waves crash. Just catching fish in the middle of the night. I don't know, there's something weird about that, but it's fun."

There's a festive atmosphere in Duluth every spring when the smelt run, even an annual parade to mark their arrival. But it's nothing like it was in the 1960s and 70s.

"People would come from all over the Midwest to fill up pickup trucks full of smelt," said Don Schreiner, a fisheries specialist with Minnesota Sea Grant at the University of Minnesota.

He says back then the smelt ran so thick you didn't even have to get wet. You could just dip a net in the water and scoop them out. He said people would fill garbage cans, dump them into the back of a truck, and return to fill their cans again. “It was crazy.”

The smelt population plunged in the 1980s, when larger predator fish, especially lake trout, recovered in Lake Superior. State officials had also stocked the lake with salmon, which preyed on the small fish. 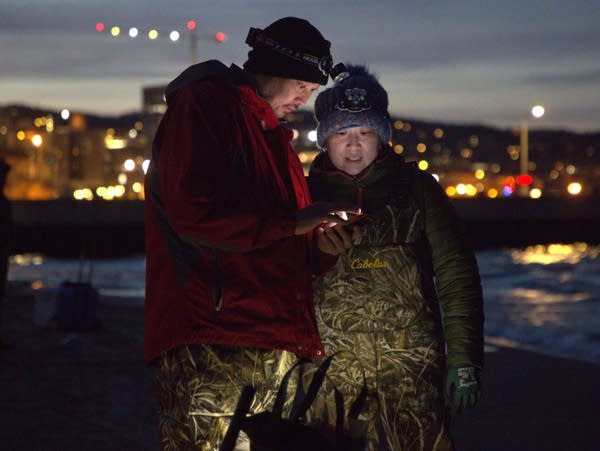 Julie Yang (right) and Clark Zang (left) look at a phone as they await the arrival of smelt May 4 along the shore of Lake Superior in Duluth, Minn - Derek Montgomery for MPR News

High levels of PFOS — one of a group of related chemicals known collectively as PFAS, or “forever chemicals” — have been found in smelt sampled along the south shore of Lake Superior, near Wisconsin’s Apostle Islands and along the Upper Michigan shoreline.

Those chemicals, which were once widely used in a variety of products from clothing to cookware, don’t break down in the environment. They have been linked to cancer and other health issues.

"And it seems like smelt, for some reason, accumulate more of this chemical than the other fish species that we've looked at so far,” said Schreiner.

But PFOS has not been found in high levels in larger fish, like lake trout, that eat smelt. That's different from pollutants such as mercury which tend to move up the food chain.

"Rainbow smelt are relatively short lived species. They don't have a long lifetime in which to accumulate contaminants. So it's a little bit of a mystery as to how and where they may have been exposed to these chemicals, and then accumulated them in their bodies,” said Jim Kelly, environmental surveillance and assessment manager with the Minnesota Department of Health.

Researchers have observed this phenomenon in other lakes and rivers in Minnesota as well. Kelly said the highest levels of PFOS are often found in panfish, not predator fish such as walleye or northern pike.

"So it's certainly a function of how these chemicals behave. And potentially, where they're concentrating within the food chain,” said Kelly. “They may only be concentrating in microorganisms or things that the smelt eat."

Minnesota officials are gathering more samples from smelt this spring for further testing.

In the meantime, health officials are advising smelters not to eat more than a meal a month of the tiny silvery fish. 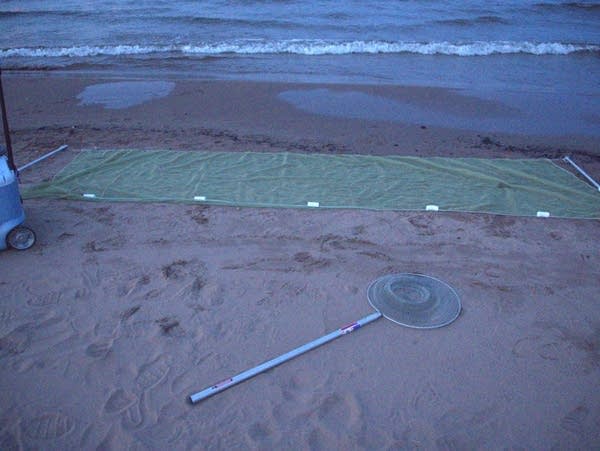 Smelt fishing gear awaits a night of fishing May 4 along Park Point in Duluth.
Derek Montgomery for MPR News

On Duluth’s Park Point, many smelters had heard of the advisory. But few seemed overly concerned.

“I'm not too worried about it,” said Lou Xiong of St. Paul “It's a big lake. It's a real clean lake. Nobody's gotten sick or anything that I know.”

Vee Sar, who moderates a Lake Superior Smelting Community Facebook group, said he also hasn’t heard of many concerns among smelters. He said most only eat a few meals over the course of a year, well within the state’s consumption advisory.

Sar, who first smelted in the late 1970s when he would camp with his dad in Duluth, says it’s a lot more work now to fill coolers with smelt.

Still, he said interest is surging. He said hundreds of new members have joined the smelting Facebook group this spring.

“It’s just camaraderie and just being among friends, meeting new people, for something that we all have in common – our passion for the outdoors."