Finding focus, and a path forward through grief, in the circus arts By Emily Bright from Minnesota Public Radio News • May 9, 2022

In a studio in northeast Minneapolis, Sherry Walling defies gravity. The rigging creaks as she swings, building momentum on a bright pink sling suspended from the ceiling. Wrapping the material around her arms and legs, she holds poses in the air, then flips once, twice, five times.

"I mean, it literally is like a playground, right? You're swinging, you're jumping on things, you're moving your body. And you know, I do it for no other purpose than it brings joy and it feels good and it feels important," she said.

Walling is a clinical psychologist by day, and she first got into the aerial arts as an indoor workout option during Minnesota winters. But four years ago, her father died of cancer. In the grief that followed, Walling came to deeply appreciate having an activity that required her full attention.

Across the room, her former coach Lynn Lunny slips into a seemingly effortless handstand. The two women are rehearsing for a circus performance Thursday, May 12 — one night only at the Aria in Minneapolis — that will include a dozen artists. The performance is inspired by, and aims to inspire discussion about, mental health, grief and healing.

Lunny says there’s a logical connection between the circus arts and the grieving process.

“I actually became a much more intense hand balancer through grief, because it became a really quiet meditative practice, which is what I needed," she said.

Like any art form, the circus arts can be made to tell any kind of story, including one of grief and loss.

Both women lost their fathers to illness and their brothers to suicide shortly thereafter. Lunny says they learned about the connection by chance.

“It's a terrible thing we have in common. And it felt really nice to have it acknowledged, because I get a lot of people that tiptoe around that kind of conversation," she said.

Lunny's brother had lived with depression for years. Walling's brother had struggled with addiction. In both cases, Walling said, they watched their brothers’ mental health unravel after their fathers died.

“I feel like we have to have better conversations about grief. Because people get really lost in it. And I saw my brother detach in a way that we couldn’t recover him," Walling said.

They're not alone. One in five American adults will experience a mental health issue in their lifetimes. And while most live with or recover from these issues, some don't. Suicide accounted for nearly 46,000 American deaths in 2020, according to the CDC.

And that means tens of thousands of grieving family members left behind.

Walling has written a memoir about her father's and brother's deaths. This week's circus performance is part book launch, part fundraiser for the National Alliance on Mental Illness, and part visual, artistic medium for describing an experience that often defies words.

"The book and the show are both called 'Touching Two Worlds,' because it honors the fact that we live in grief and joy at the same time. And that I will never stop grieving my brother and father because I will never stop missing them," Walling said. "And so we're honoring that grief is present as long as the love is present, which is always, but we can also still play, still be in joy, still be alive."

The circus show opens in joy, then delves into addiction and mental illness, including the pain of watching a loved one struggle. It ends on a note of hope. Walling and Lunny say they hope the show stands against the stigma of mental illness, and creates a space where those who have lost loved ones feel seen. 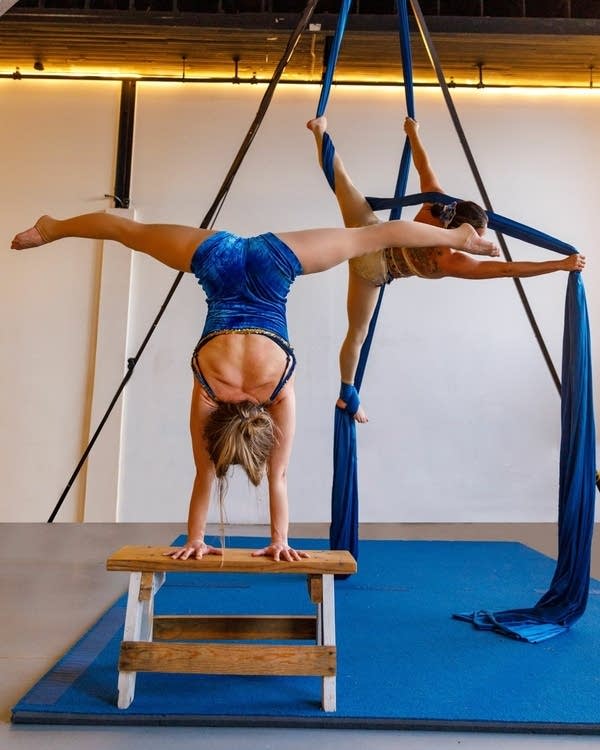 Lynn Lunny balances on a stool built by her late brother, as she practices.
Photo by Steve Bozeman

For Lunny, the show is also a chance to do an act she's been thinking about ever since her brother died. As piano music plays, she’ll be performing her handstand act while balancing on a low stool that her brother built for her.

"He had just built it out of things he found, which is very much my brother — like he was just like this very giving and very creative (person) and could just kind of like, build stuff out of scraps," she said.

It isn’t fancy to look at — but it’s solid and strong, and it will be the thing that holds her up on the night of the performance, recalling not just how her brother died, but also the life he lived.

Resources if you or someone you know is considering suicide:

To see the original report and read related stories, follow this link to the MPR News website. https://www.mprnews.org/story/2022/05/09/finding-focus-and-path-forward-through-grief-through-the-ci...

Watch a snippet of a performance rehearsal here