He's 13 and graduating from the U of M. His next quest is a physics Ph.D. Elliott Tanner, 13, graduates Tuesday from the University of Minnesota and has plans to go on to a Ph.D. at the U. Photo: Courtesy of Michelle Robb Tanner

By Sam Stroozas from Minnesota Public Radio News • May 7, 2022

Elliott Tanner fell in love with physics when he began classes at Normandale Community College. He was 9 years old — an age when most Minnesota kids are fourth-graders.

“I started taking some of the introductory physics courses they have you take to go through the math major and I realized that it was just so amazing and cool,” he recalled. “It can tell you how the world works, and I just sort of fell in love with it.”

He’s already been accepted into the U’s physics graduate program, where he has his sights set on earning a doctorate. He’ll be the university’s youngest-ever Ph.D. candidate. 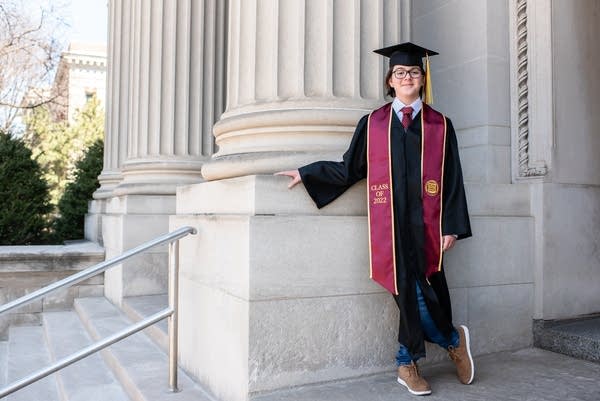 Elliott Tanner will graduate from the U on May 12. Photo: Courtesy of Michelle Robb Tanner

Elliott is an only child, so his mother, Michelle Robb Tanner, said she did not have anything to compare Elliott’s early advanced learning.

“We thought it was just natural progression but he hit milestones early,” she said. “I think the thing that made us go ‘Oh wow, he is different,’ were his math abilities at age 3. He was very into math and adding and subtracting and then we realized that it was probably not normal for others.”

Elliott was home-schooled and when his abilities surpassed his mother’s, she and her husband decided college classes were the next step. Elliott took a placement test at Normandale and enrolled in computer programming courses, math and even English composition. But, physics remained his top interest.

“I saw how physics was like math, but required a little bit less of those annoying middle steps and extra rigor that goes along with it,” he said. “Physics is just a lot more interesting to me, it is math but with intuition.”

After obtaining his associate degree at Normandale he enrolled at the U for his bachelor’s at age 11.

Elliott and his family had been reassured by past professors, friends and family that doctoral programs are usually paid for by the schools. More than 90 percent of first-year physics Ph.D. students had an assistantship or fellowship to help fund their program, according to a 2016 report from the American Institute of Physics.

But for Elliott, that does not look like it will be the case.

While Pell grants, financial aid and a presidential scholarship helped fund his two years at the U, his acceptance letter to the graduate physics program did not include a financial aid package or offer of an assistantship or fellowship. Elliott wrote to the school asking why and was told that they did not have any money to provide.

A spokesperson said the university could legally not publicly comment on the status of an incoming student’s financial aid.

Michelle Robb Tanner said she was shocked to learn Elliott would not receive any funding, and her family lacked the means to pay the full tuition cost, roughly $100,000. As a last resort, she launched a Go Fund Me a few weeks ago and has raised over $40,000, almost half the amount Elliott expects to need to cover the cost of his five-year program.

“It was worrying but my mom has always advocated for me. She is completely awesome and super cool, and she has helped me get through tough times and struggles and she has always been one of my greatest supporters,” he said.

Elliott wants to be a high energy theoretical physicist and is particularly interested in neutrino physics, or subatomic particles with no electric charge, often nicknamed “ghost particles” for their speed and mysteriousness.

He hopes to one day teach at the U of M.

“He has some big ideas and a lot of stuff he wants to contribute to the world,” his mom said. “And for everybody to see that in him, it’s just really touching to us.”

To see the original report and read related stories, follow this link to the MPR News website. https://www.mprnews.org/story/2022/05/05/42000-raised-for-bloomington-boy-13-to-start-phd-at-u-of-m
Student Voices