All eyes on the ice: Canoe country still frozen as permit season starts The view of Sea Gull Lake on May 3, 2022 Photo: Courtesy Seagull Canoe Outfitters

By Greg Seitz from Quetico Superior Wilderness News • May 3, 2022

The permit quota season began in the Boundary Waters Canoe Area Wilderness on May 1, which usually signals the beginning of wilderness paddling. But the Boundary Waters remains locked in ice and snow. Reports from across the Superior National Forest indicate several inches of ice still on some lakes, and nearly 100 percent snow coverage in the woods. Additionally, runoff and flooding has closed at least one road used to access a popular wilderness entry point.

It’s not unusual for ice and snow to hang on into early May, but the sheer amount left on the landscape at this point is significant. It will be at least a week before any lakes begin opening up, but nobody knows just when that will be.

On Round Lake off the Gunflint Trail, Tuscarora Lodge and Canoe Outfitters proprietor Andy McDonnell shared a brief video with a snow and ice status on April 29, showing the lake still solidly locked in, and what looked like deep snow surrounding the outfitter’s buildings and parking lots.

He was not willing to guess when the wilderness might be free of ice and navigable by canoe again. He would only say “mid-May,” and said it was impossible to say exactly what that might be.

But, in another video on May 1, Tuscarora reported significant rain over the weekend and that “the melt is on.” Still no predictions for ice-out.

South of Tuscarora at Sawbill Outfitters, the staff report plenty of ice remains on the entry point lake. They said as of the morning of May 2 that there were 17 inches of solid ice, and nearly 20 inches of slush on top of it. On April 30, the outfitter said they predicted the ice would be around for another week, “if not more.”

Sawbill also recently shared a chart of their ice-out data going back to 1990, provided by the State University of New York at Buffalo, which they have partnered with over that time. It shows the latest ice-out date on May 17 in 1995. Most historic ice-outs are in the first few days of May, while the earliest was in early April.

The late winter isn’t just interfering with paddling, but also campgrounds outside the wilderness. On April 20, the Superior National Forest announced that several sites won’t be opened as usual on May 1 because of delays caused by the snow and ice. The Forest Service said it anticipates having everything open between May 6 and 12.

And the significant snowpack and slow melt has also led to flooding which has cut off one entry point. On May 2, the Superior National Forest announced the Mudro Lake entry point is inaccessible at this time. 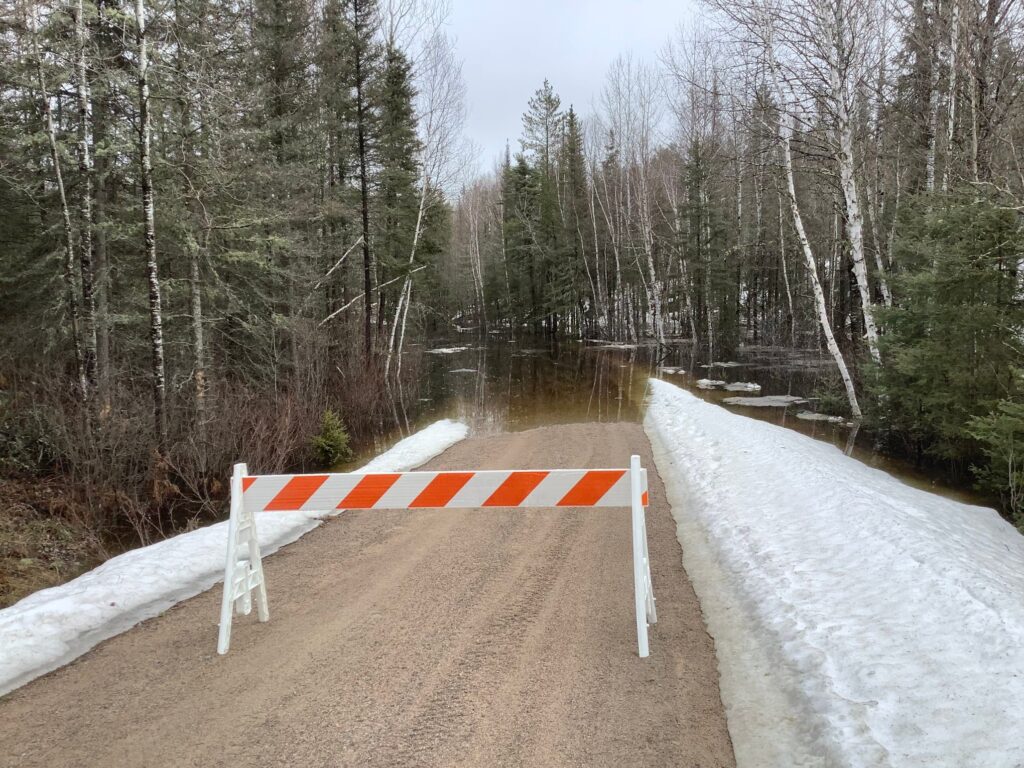 “Grassy Creek Road, known as Grassy Lake Road or Forest Road 459, is closed approximately 2.7 miles from the beginning of the road due to flooding and several feet of standing water. Mudro entry points off of the Grassy Creek Road are inaccessible at this time. For BWCAW visitors with Mudro Lake entry point permits reservations will be automatically fully refunded through May 10. Forest Service staff are working on repairing the culverts and will re-open the road once it is passable.”

Ice is also influencing the behavior of migrating birds, which are anxious to return north to their breeding grounds.

“This year, we’re seeing more of them sticking around longer in the open water,” Steve Kolbe, an avian ecologist at the University of Minnesota Duluth, told WTIP. “And likely that is due to the fact that a lot of the lakes up north are still frozen. And they’re waiting for them to open up.”

On Lake Superior’s Isle Royale National Park, winter has also slowed down efforts for staff and boats to return and begin preparing for summer visitors. 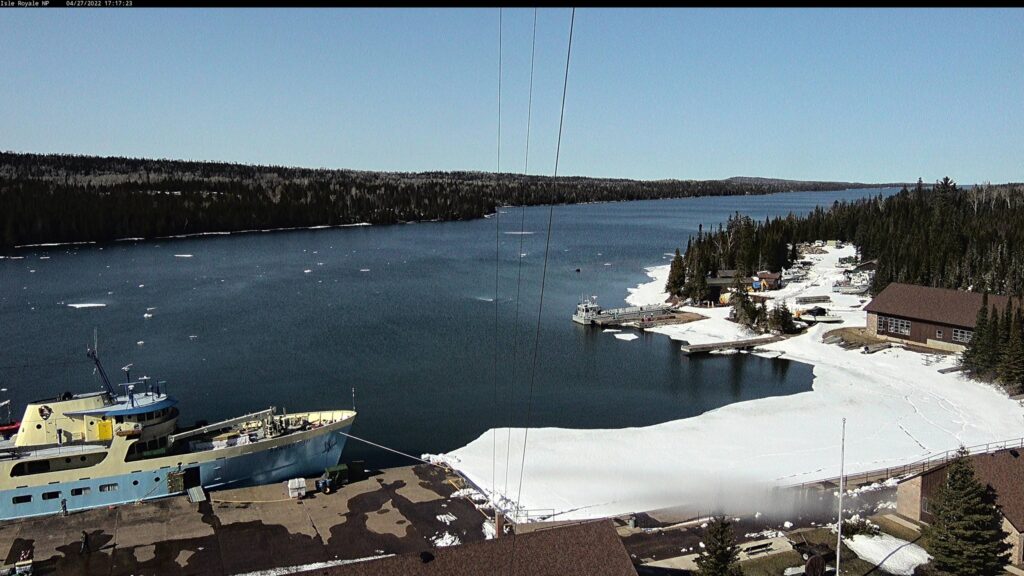 The boats Ranger III and LCM Angelique are docked after arriving at Isle Royale on April 27. Photo: National Park Service

On April 30, Park spokesperson Liz Valencia said the first boat to head back to the island was scheduled for April 21, but had to be delayed until April 27. While they have now gotten to Windigo Bay, other parts of the archipelago remain locked in.

“No vessels have made it to the Windigo Ranger Station yet,” WTIP reported. “Satellite photos show that the ice is still as far out as Beaver Island, so it will likely be another week or so before the park service is able to get there to open up buildings.”

On the late side of normal

Data from the Minnesota Department of Natural Resources on ice-out across the state offers more perspective on this year. Current conditions are still well within normals, but could extend into an especially slow start to the year.

“The definition of lake ice out can vary from lake to lake,” the DNR says. “For the citizen observers reporting data, ice out occurs when the lake is completely free of ice. Or, it may be when it is possible to navigate from point A to point B. Ice out may also be when a lake is 90 percent free of ice. Observers use consistent criteria from year to year when reporting lake ice out dates.”

The DNR’s data show the one of the longest spring ice seasons was in 1950, when several lakes were not open until around May 20.

The weather forecast for the region does offer some promise. While the National Weather Service says there is still one to two feet of snow in the woods along the North Shore, with less as one travels west, the meteorologists also say there will be plenty of sun, and high temperatures in the low 50s, in the days ahead.

And, no matter what paddling plans people might have, all anyone can do is wait. As Tuscarora Outfitters wrote in one of their ice updates, “we’d do well to remember the wise words of Ralph Waldo Emerson: ‘Adopt the pace of nature; her secret is patience.'”