Keenly observed by her dog, Awanookwe Kingbird-Bratvold empties a bag with maple sap into a bucket near Red Lake, Minn. on April 23.  Photo: Monika Lawrence for MPR News

On a recent brisk spring morning, in the backwoods of the Red Lake Reservation, Bemidji State University assistant professor, Awanookwe Kingbird-Bratvold worked among the maple trees. She emptied thick plastic bags of clear sap, harvested a drop at a time, into an old, white, five-gallon bucket.

On this day she’s alone. But often she has students help her as part of the curriculum for BSU's new Indigenous Sustainability Studies Program. Together they manage dozens of maple trees, transforming a forested syrup camp into a modern-day classroom. 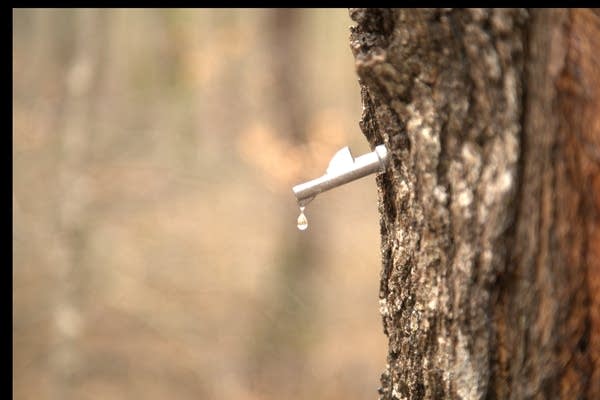 Awanookwe Kingbird-Bratvold observed less sap in the bags which may indicate the end of the maple sapping season.  Photo: Monika Lawrence for MPR News

“It's a program that really allows a person to explore environmentalism through an Indigenous lens,” Kingbird-Bratvold said. ”They're able to study different indigenous people across the world and then also they're able to gain some insight on, you know, what are Indigenous people doing in today's time, modern time as far as environmental practices go, or how to sustainably care for the land base.”

Planning for the degree program began in 2018 with the help of a $600,000 grant initiative from a sustainability foundation.

The objective is to examine competing approaches to sustainability and managing resources.

For centuries, much of what the organizers label as Western culture has been taught that human beings are separate from nature — independent and dominant. However, many Indigenous people are raised with the belief that they are a part of nature — equals.

Oftentimes, the two views are in opposition of one another, which can lead to conflict.  A recent example in Minnesota is the debate and protests over Enbridge’s Line 3, where the demand for oil supplies was pitted against possible threats to water quality and wildlife. 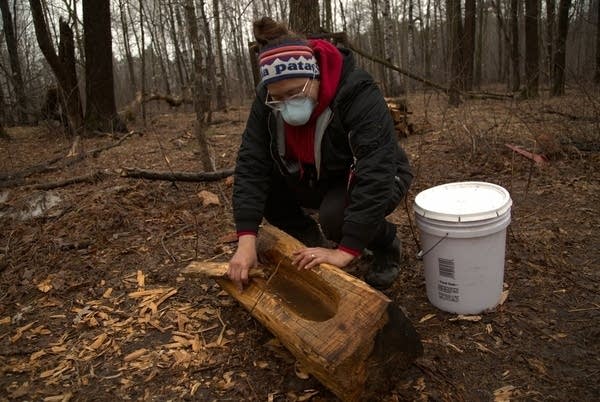 Red Lake Ojibwe Band member Erika Bailey-Johnson helped create the degree program and serves as sustainability director. She says in the beginning they weren’t exactly sure how to best use the grant money. So they gathered campus-wide input from BSU faculty and students. It also helped that BSU is surrounded by three of the largest tribal nations in Minnesota — Red Lake, White Earth and Leech Lake.

BSU added five courses to its existing catalog of environmental science classes to create the degree program. The new classes cover such topics as the local and global indigenous perspectives on food sovereignty, health, sustainable communities, environment, wellness and the sacred connection to place.

Bailey-Johnson says the classes look at issues from Indigenous and Western perspectives.

“The goal is to have students understand both, and then how they can work together, or how they can support each other in solving a lot of these complex environmental issues that we face,” she said.

Whereas the three pillars of sustainability in Western science are widely recognized as being: economic, environment and social, Bailey-Johnson said the BSU program goes one step further, adding wellness.

The social pillar has also been expanded to include all beings interacting with each other, not just humans. Also under the BSU model the economic pillar considers the exchange of goods and services at all levels, including for example trees sharing resources underground between roots and microbes in the soil.

“Every person individually, every organization, community and ecosystem, can define wellness for themselves, right? What does that mean? What feeds you physically, spiritually, emotionally, mentally?” asked Bailey-Johnson. “So, wellness is a piece that we added that then really helps us think about sustainability differently.”

The BSU sustainability model has been shared with campuses across the U.S. and Canada. 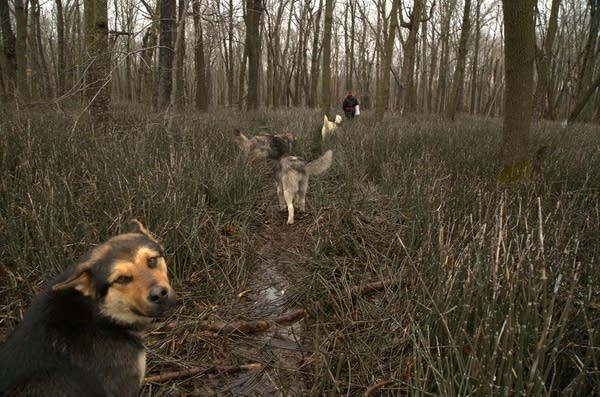 Awanookwe Kingbird-Bratvold walks into a swampy area covered in rough horsetail grass to harvest more maple sap near Red Lake on April 23. She is accompanied by a group of neighborhood dogs. Photo: Monika Lawrence for MPR News

While teaching the process of tapping and boiling sap to make syrup, she also exposes her students to Ojibwemowin, the linguistic traditions and stories of the sugarbush, as well as the connection between the land base and Red Lake Nation community. She shares the medicinal value of maple sap and Indigenous teas, the healing properties of trees and healing frequencies that can be heard through songs. Knowledge passed down to her from tribal elders.

“Going through this program really is an opportunity for one to not only connect with the environment and understand the complexity of Indigenous issues and all the issues with environment right now, but also to learn about who they are as a person, as a human,” says Kingbird-Bratvold. “It’s not just about me, it’s not just about BSU, it’s about healing and being of service to our community.”

Kingbird-Bratvold says her classes have been evenly split between Indigenous and non-Indigenous students.

Kimberly Shelton graduated with a minor in Indigenous Sustainability Studies last semester and is now working on a master’s in wildlife biology. She plans to work for the U.S Fish and Wildlife Service as part of their direct-hire program. Shelton says she will incorporate what she’s learned into her occupation.

Shelton currently lives on the Leech Lake Reservation and identifies as not just white, but “very white.” This is despite her strong ties to Cass Lake, where one of her grandparents was an enrolled member of the Leech Lake Reservation. She says as a biologist she never felt a sense of belonging or community before getting involved with the program.

“The biggest thing I took away from it was knowing that the vision to create a more sustainable future, in this way, isn’t only something that I was passionate about. A lot of people share that,” Shelton said. “As I look forward to the potential of working for the federal government, for the U.S Fish and Wildlife Service, I feel a lot more confident about how I fit and how I can bring these teachings, in a good way, to that role.”

Now all the grant money to launch the program has been spent and it’s BSU’s responsibility to keep it going.

Sustainability chair, Dr. Carl Isaacson, another program organizer, says its future depends on enrollment numbers and its ability to itself be “sustainable.” He also says programs like these are important because they help facilitate dialogue between different groups, whether it’s the Dakota Access Pipeline or Enbridge’s Line 3.

“We’re trying to get people to understand the worldview of other cultures and then incorporate that thinking into the process so that we don’t have conflict at the end,” he said. “We have people coming together and talking to each other, and finding solutions for the problems that they face.”

To see the original report and read related stories, follow this link to the MPR News website. https://www.mprnews.org/story/2022/05/04/new-bemidji-state-degree-draws-on-indigenous-practices-to-t...