The Minnesota state flag flies in the wind on April 21 on the State Capitol grounds in St. Paul.
Photo: Andrew Krueger | MPR News

Flags are a big deal in Minnesota. Civil War flags line the rotunda of the State Capitol. A Confederate flag captured at Gettysburg is among the state's most prized historical artifacts.

But the official state flag, critics say, is a racist relic best left in the past.

Efforts to change the design have made some progress at the Capitol this legislative session — but face stiff headwinds from supporters of the existing flag who say it’s an important part of Minnesota's history.

Based on state seal

From a distance, the design of the Minnesota state flag isn't particularly memorable. Dating back to the 19th century, the iconography is all but indiscernible atop a typical flag pole. 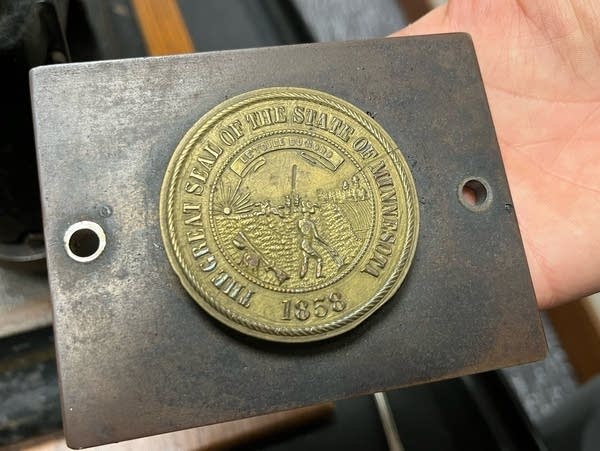 This engraved Minnesota state seal, long used in a press for official documents in the Secretary of State's office, may be one of the oldest examples of the the state's official symbol, showing a European settler and a Native American in what has become a controversial depiction of state history.  Photo: Tim Nelson | MPR News

The central feature of the flag is the state seal. And there actually is such a thing. 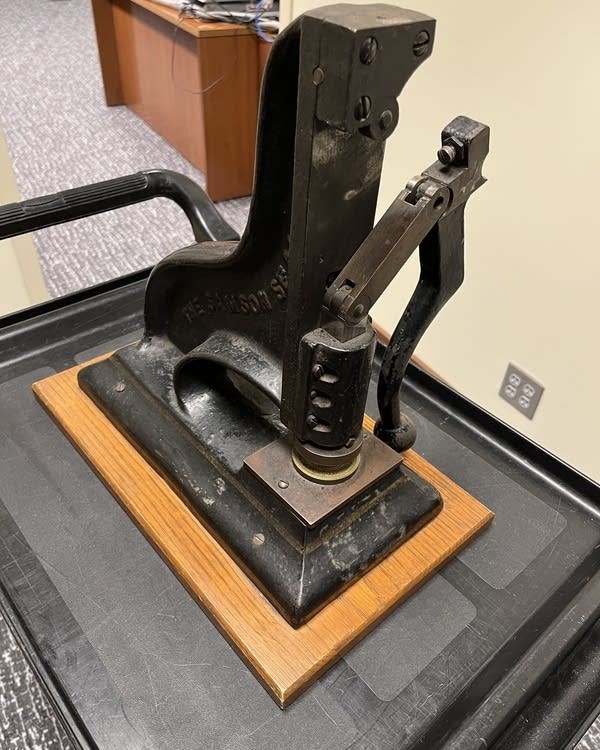 This massive steel press — with a broken handle — was once used to emboss Minnesota's state seal on official documents. The device's lever handle has a broken pivot and has not functioned for years.  Photo: Tim Nelson | MPR News

It's a 2-inch engraved medallion, mounted on a massive steel hand press in the Secretary of State's office — although the handle is broken, so it doesn't really work anymore. A digitized version is its modern stand in.

But in whatever form, the seal retains some details that critics find increasingly troubling, including the depiction of a Native American on horseback — maybe being driven away, maybe escaping. But usually interpreted as leaving behind a settler at his plow, beside the Mississippi River, a rifle leaning nearby.

"It is very consciously part of the design of the seal to depict the displacement of Native Americans, and I don't think it has any place on our state flag," said DFL state Rep. Mike Freiberg of Golden Valley, author of a bill to redesign both the state flag and the state seal the flag is based on.

‘Not a stretch to call it genocidal’

A poem purportedly penned by Mary Eastman, spouse of the Fort Snelling soldier who designed the seal, offers the decidedly retrograde interpretation of the original image, urging the "red man" to flee all the way to the Pacific coast, leaving white settlers to claim the state's wealth. Military and civilian officials eventually did force hundreds of Native Americans out of the state, in 1863 — killing untold numbers along the way.

Freiberg says that poem lends clear meaning to the seal. "It's not only racist. I don’t think it's a stretch to call it genocidal," he said. 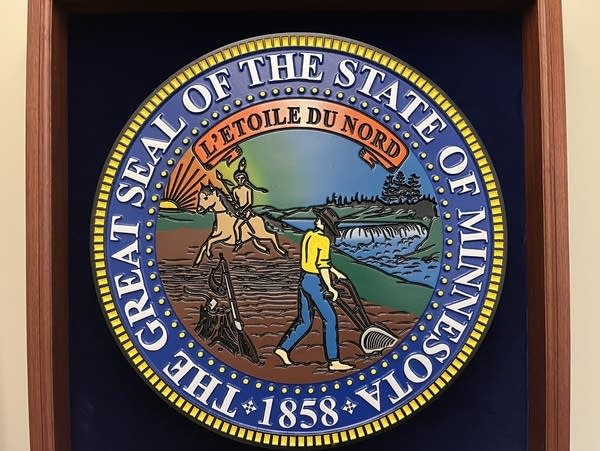 This is a modern version of Minnesota's state seal, on display at the public counter in the Minnesota Secretary of State's office in St. Paul.  Photo: Tim Nelson | MPR News

His measure would create a state commission to weigh proposals and make recommendations for a change to the seal and flag by next January. The bill has already had a hearing and is being incorporated into one of the big House bills the legislature will be negotiating in end-of-session conference committees.

DFL Rep. Jamie Becker-Finn of Roseville, herself of Native heritage, says the time has come for a change. She has already opted out of the state seal lapel pin legislators often wear to note their office at the Capitol. And she says digital technology means longstanding barriers to change, like printing and stocks of official letterhead, are easier to overcome.

"I think people have become more comfortable with the idea that change is okay, especially when we might end up with a better product for everybody," she said. 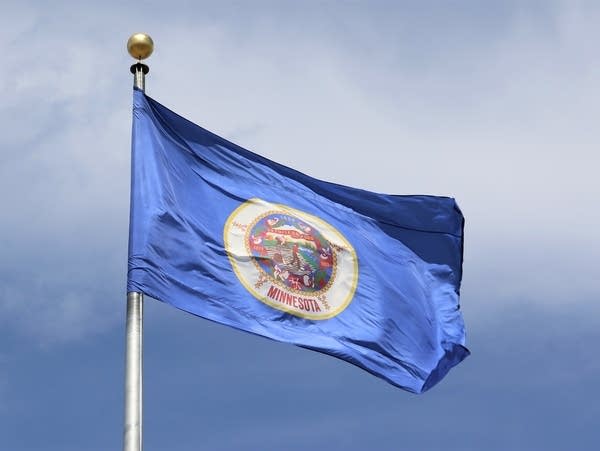 The Minnesota state flag flies in the wind on April 21 on the State Capitol grounds in St. Paul. Photo: Andrew Krueger | MPR News

She also said a good flag, simple and recognizable — like the flags of Arizona and New Mexico — could actually become a familiar logo and statement about the state, even to non-Minnesotans.

Some have pushed the state to adopt the so-called "North Star Flag" — a text-less design with a gold star on a field of blue, white and green.

But the idea of making any changes to the flag is at a dead stop in the GOP-controlled Senate, where it won't get a hearing this year.

State government committee chair Mary Kiffmeyer — a former secretary of state who was once the custodian of the official seal — says that with the state just emerging from a historic pandemic, and a $9 billion budget surplus before lawmakers, the state flag is a low priority.

Kiffmeyer also says history didn't stop in 1863: in the Civil War and ever since, thousands of Minnesotans have served under the existing flag, many of them wounded or killed in battle.

"This is our flag. Love it or hate it or whatever you want to think about that, it still is our flag," she said. 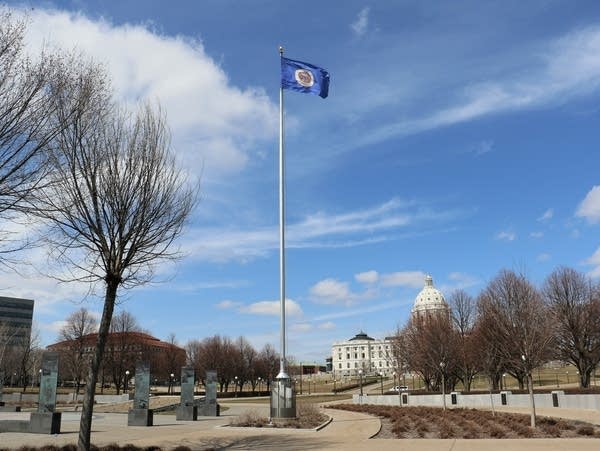 The Minnesota state flag flies in the wind on April 21 on the State Capitol grounds in St. Paul, with the Capitol dome in the distance. Photo: Andrew Krueger | MPR News

And she says she's reluctant to involve the legislature in historic reinterpretation.

"If we redesign this, then what next? Where would this stop? 10 years from now? 20 years from now, when somebody else doesn't like that one?" she said.

But supporters, like Sen. Mary Kunesh, a DFLer and the first Native American woman to serve in the state Senate, says it's simply about correcting the symbolic record — that Indigenous Minnesotans did not, in fact, ride away into the sunset.

"Look at how our Native folks have persevered and stayed connected with the culture and the religion and the language, and the land appreciation," she said. "We have been here, we are here, and we're still contributing to the health and wealth of Minnesota."

To see the original story and read related articles, follow this link to the MPR News website. https://www.mprnews.org/story/2022/04/27/north-star-journey-minnesota-state-flag-debate