Wedged into a St. Paul alleyway, the "Conservatory," made of solid ice blocks, will house a lush greenhouse filled with flowers, a stark contrast to the chill of Minnesota winter. The ice greenhouse is the creation of artists Andy DuCett and Jovan C. Speller, seen inside the ice structure. Photo: Judy Griesedieck for MPR News

The Great Northern Festival will present some 50 events, from the Minnesota Orchestra Lunar New Year concert to saunas and cold plunges, plus the “Slow Show” (a super slow dance on Como Lake) and even visits to the quietest place on earth at the Orfield Labs in Minneapolis.

“We are asking people to weave through these different types of activities and really get a sense of all that happens here,” said festival Executive and Artistic Director Kate Nordstrum. 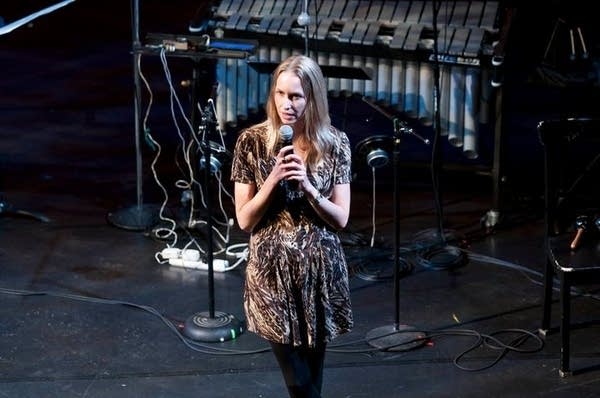 She continues it's all designed to spotlight winter culture in the north. “So through artistic programming, outdoor programming, climate-focused programming, we can reflect on winter and what it gives us and what we stand to lose as climate change makes winter different,” she said.

The Great Northern draws together elements from the St. Paul Winter Carnival, the City of Lakes Loppet and the U.S. Pond Hockey Championships — and then adds a whole lot more. There are discussions on climate change and examinations of how Minnesota has changed in recent years.

Which in turn leads us to one of the festival’s centerpieces, set up in an alley in downtown St Paul. Artist Andy DuCett explains why there is an ice-enclosed greenhouse called “Conservatory” filling the alleyway.

“The concept is that having this show up in an unexpected place — having the ice be representative of a harsh kind of cyclically cold environment like we get here in Minnesota — but then showing inside this thriving, abundant, richly growing evidence of life,” he said. 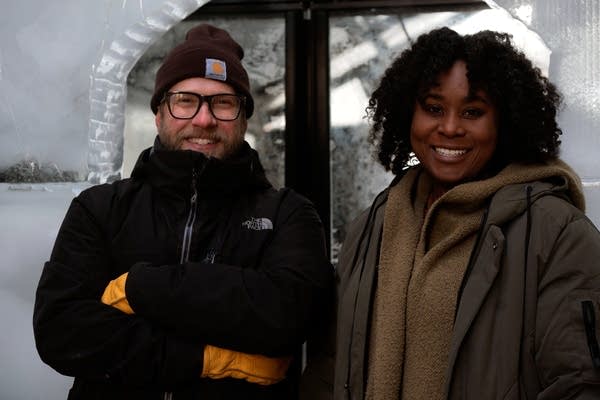 Artists Andy DuCett (left) and Jovan C. Speller, creators of the "Conservatory," stand in front of the entrance of the structure, which is wedged in between two buildings in an alleyway in St. Paul and made of solid ice block. Inside, a lush greenhouse will offer visions of a warmer climate, filled with flowers, while microphones placed in the ice will allow visitors to hear the cracking of ice. Work from Minnesota artists who identify as Black will share work "created post the George Floyd murder," explains Speller, to be shared through an interactive web component. "It's going to be a multi-disciplinary, virtual expedition." Photo: Judy Griesedieck for MPR News

DuCett is working with fellow artist Jovan C. Speller on the project. She's filling the greenhouse with luscious plants.

"And on the sides, kind of tiering up the walls, there's going to be abundant, deeply hued, black, purple, brown plant life,” she said. “And it will feel warm. There will be beautiful lights on to support the plant life. So yeah, it'll just feel like abundant life kind of in the middle of a place that is cold. And a little bit harsh."

The project is charged with a metaphor about Black life surviving in a cold climate. Already being planned at the time of George Floyd's murder, Speller and DuCett retooled it to explore the racial reckoning facing the community. DuCett says a quirk of timing led to the federal trial of three former Minneapolis police officers for violating Floyd's civil rights opening right across the street just as Conservatory is launched. 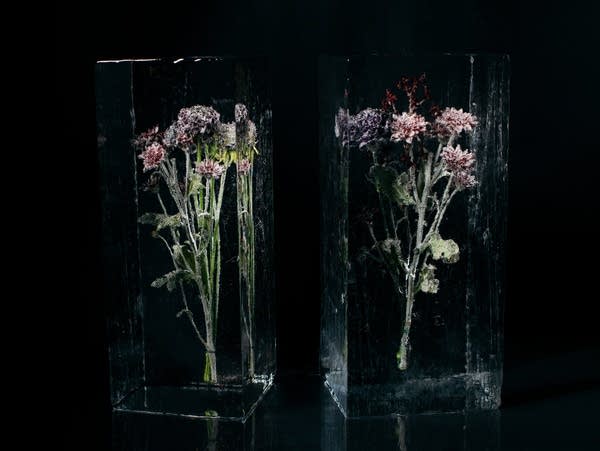 A preview image for "Conservatory," an art piece by Jovan C. Speller and Andy DuCett.
Photo: Fadumo Ali, courtesy of The Great Northern

"When people approach from the Fifth Street side, they'll see Conservatory,” he said, “but then they'll also see the federal courthouse behind it, complete with the riot fencing that's in front of it for the jury selection. So we think it's pretty apt kind of full circle for the project."

To add to the “Conservatory” experience, DuCett embedded contact microphones in the ice walls. The heat from the greenhouse will cause settling and cracking, sounds which will play through speakers inside the greenhouse.

Creepy pings and echoes irregularly pop around the plants. Out on a frozen lake, a cracking sound might be bad news. Speller says in “Conservatory” it's an acknowledgment of everyday reality.

The artists point out that the cracking could also symbolize positive change. There is also a virtual reality element to the show, featuring work by 15 local Black artists.

The pandemic has caused a few Great Northern projects to be postponed, but organizers say they are being very COVID-conscious and have many outdoor activities. They hope people will challenge themselves to maybe try four different events and to really celebrate winter.

To listen to an audio version of the original story and see related reporting, follow this link to the MPR News website.  https://www.mprnews.org/story/2022/01/26/great-northern-festival-celebrates-winter-culture-through-a...