Surfers from around Minnesota knew something special was brewing over Lake Superior this week. A strong winter storm Tuesday was forecast to create giant swells on the big lake, and, hopefully, some of the best surfing conditions in years.

So early Wednesday morning, after working a 12-hour overnight shift at a Twin Cities refinery, Tyler Ray hopped in his car at 6 a.m., drove three hours north to the shore of Lake Superior, pulled his surfboard out of his car, slipped on a thick wetsuit and hit the waves — on no sleep.

“So I don't even know how tired I am right now,” he said during a break from the frigid water, warming up in his idling car. “Because the waves are pumping, dude!”

Ray was among dozens of surfers who congregated at a well-known surfing spot called Stoney Point, about 15 miles up the Lake Superior shore from Duluth.

They bobbed in the water clad in black wetsuits, waiting to catch waves that crested as high as 15 feet, curling gracefully before crashing to shore.

Serious surfers in Minnesota like Ray are also self-described amateur meteorologists. They have to be to know when to catch the best waves, which occur after big storms, when the wind blows hard out of the northeast, across 350 miles of open water over Lake Superior — what surfers call “fetch.”

“And when it lines up like this, this is what you look for,” Ray said. “We haven't had a low pressure come across like this in quite a while. So you can see everyone's here because we're just fiending for waves!”

The prime conditions attracted surfers from around the region and beyond. Pro surfer Ben Gravy even flew in from New Jersey to surf 15-foot swells. 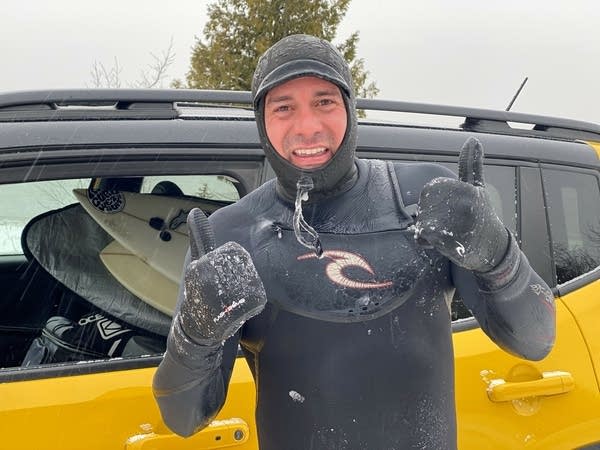 But the best surfing days on Lake Superior are often accompanied by arctic temperatures. Surfers this week had to contend with wind chills that plunged far below zero.

To stay warm in the frigid water — which isn’t much above freezing — surfers wear thick hooded wetsuits, gloves and booties. Only their faces are exposed. Ray says he spreads Vaseline on his eyelids on really cold days to prevent his eyes from freezing shut.

But once surfers plunge into the water, Yvonne Wilkie, 58, a longtime Lake Superior surfer from Webster, Wis., says it’s almost a spiritual experience.

“Because when you're out there, connecting with the water, and being able to just feel the vastness of that lake out there, and see it,“ she says, only then is she “aware of how much power that lake has, and how quickly it can change.” Her husband, Erik Wilkie, 63, says the icy water is rejuvenating. “You become encrusted with this ice layer in just a matter of an hour or less,” he says. “And feeling like you're pushed to a survival level that you haven't been to before.”

After surfing for a half hour to an hour, the Wilkies retreat to their red pickup, fire up the heat to thaw out, and sip on hot tea to warm up.

Yvonne Wilkie says she’s seen many more women take up surfing in recent years. And the scene in Minnesota has grown, others say. A surf shop even opened up in Duluth a couple years ago.

“Five years ago, I think I recognized every face in the water, I knew most of the names,” says Jared Munch, a surfer and stand-up paddleboard instructor in Duluth.

“And now I meet new people and new faces every time I come out. It's definitely growing.”

Munch learned to surf on Lake Superior. But it’s a challenging place to learn. In addition to the frigid temperatures, the water is less buoyant, and the waves are closer together.

Many of the surfers here learned in much warmer places. The Wilkies learned to surf in California, where Erik is from.

Tyler Ray also grew up surfing in southern California, before going to college in Hawaii. One thing he says he appreciates about the Minnesota surfing scene is the sense of camaraderie. 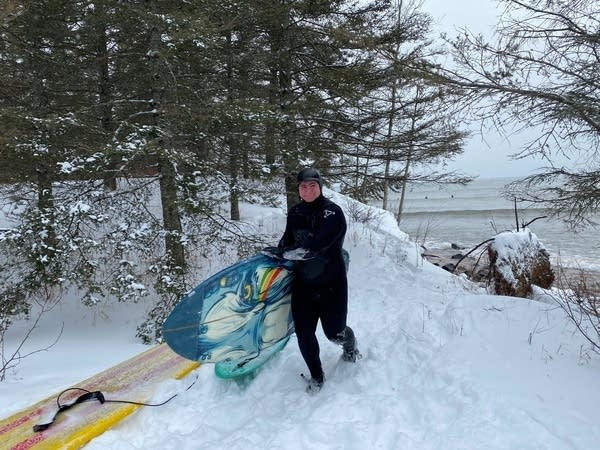 David Kohl lugs his surfboard through deep snow back to his car after a day of surfing in Lake Superior in subzero wind chills on Wednesday. Photo: Dan Kraker | MPR News

“It’s totally unique,” Ray says. “In southern California where I'm from, you'd be getting ‘stink eye’ if [other surfers] don't know you,” he says.

On Lake Superior, he says, “It kind of takes you back to the roots of why we all started to surf in the beginning which is — it's fun. You're not out here to get the shot or make money. We're just doing it because we love it.”

But even for Ray, the love on Lake Superior only goes so far. After his third time surfing for the day on Wednesday, he was done. “I’m so cold dude, I’m barely able to talk,” he said.

But he says he was excited that he’d secured a GoPro video for his kids, who wanted proof that he’d braved the freezing surf of Lake Superior.