Stranded motorists wait for a tow on Interstate 95 on Tuesday in Ladysmith, Va. About 48 miles of the interstate were closed due to ice and snow. Photo: Steve Helber/AP

It was the stuff of drivers' nightmares. Virginia Sen. Tim Kaine called it "dystopian."

This week, motorists were stuck in freezing temperatures – some for more than 20 hours — along a 50-mile stretch of Interstate 95 in Virginia. Heavy snow fell Monday, causing several vehicles to crash and bringing traffic to a standstill.

Kaine was one of those unlucky souls stuck for hours, "It was pretty grim," he told NPR.

"It was a cold night. I was stuck on the interstate between two exits - Ladysmith and Thornburg - where there was big backups. And so I was just surrounded by cars and trucks that were stopped just like I was," he said.

Kaine's ordeal — which began 1 p.m. on Monday — didn't end until he arrived at the U.S. Capitol on Tuesday around 3:45 p.m. That's roughly 26 hours and 45 minutes for a trip that usually takes about two hours.

"This was a good wake-up call in terms of personal preparedness and being aware of some of the limitations of what the government and first responders can do for us," said Eric Stern, a professor at the University at Albany's College of Emergency Preparedness, Homeland Security and Cybersecurity.

There are ways for drivers to better protect themselves and their families in these types of situations, which can turn deadly for vulnerable people, preparedness experts told NPR.

Keep emergency supplies in the car

Drivers who can afford to should always carry some type of emergency kit in their vehicles, advised David Bennett, a repair systems manager for AAA.

Snow or other bad weather isn't always the problem, he noted.

"It can be a nice day out and a major car pileup snarls traffic for hours," he said.

Some key provisions to have in the car:

In the case of Monday's storm, freezing temperatures posed another risk for drivers, University at Albany's Stern said.

"Hypothermia is another concern."

Blankets, extra clothes, hats, scarves and gloves are all good things to keep in the car, especially if going out in harsh conditions, he said.

And finally, before hitting the road, make sure your gas tank is topped off, both Stern and Bennett said.

In Kaine's case, having a full tank helped him stay warm as others around him ran out of fuel.

Staying in the car is usually the safest option

It's hour eight and traffic has yet to move. Hunger has set in. In the distance, a distinct yellow arch can be faintly made out.

Getting out of the car and walking to the nearest exit for food won't be so bad, right?

Leaving a vehicle, and potentially the only safe shelter and heat source, is not a good idea, experts told NPR.

"If you were to leave a vehicle, you'd have to have a very good reason. You have to have a good idea where you are," Stern said. "You'd have to try to assess: 'What are my prospects of being rescued if the situation has gone on so long that it's potentially life threatening?'" 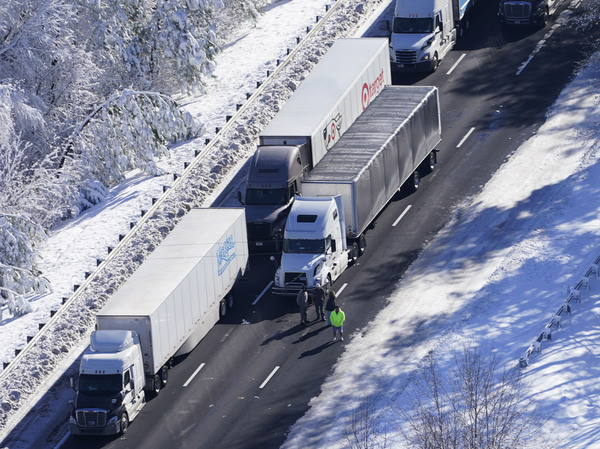 Drivers look down the roadway as cars and trucks are stranded on sections of Interstate 95 on Tuesday in Carmel Church, Va. Photo: Steve Helber/AP

Since a car is the safest place to be in this situation, Stern and Bennett said it's important to always maintain the vehicle so it can hold up in bad weather.

The National Highway Traffic Safety Administration lists several steps for maintaining a car and prepping it for winter driving conditions.

Drivers should keep exhaust pipes clear of snow and ice to avoid the risk of carbon monoxide poisoning, the agency advises. It also doesn't recommend running the car for long periods of time with the windows up or in an enclosed space.

A situation like Monday's was avoidable, according to Jonathan Porter, AccuWeather chief meteorologist.

Leading up to the storm, AccuWeather and other experts issued warnings ahead of the fast-moving snow storm, Porter said.

AccuWeather's forecast the previous day predicted several inches of snow that would come down fast — at least 1-3 inches every hour right in the middle of the morning commute, he said. The warnings were issued for drivers and local governments to be prepared and stay home. And yet, the backup on I-95 still happened.

In situations where local governments drop the ball, it's particularly important for individuals to take such warnings seriously, he said.

"People have a lot of different reasons for traveling. It's about being more proactive as it relates to winter weather and keeping track of that forecast," Porter said. 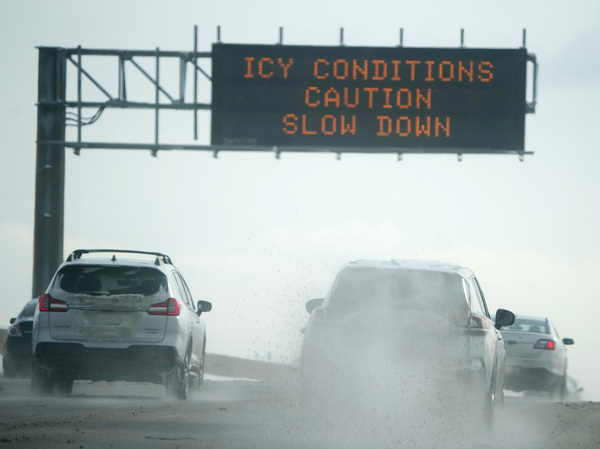 Motorists travel along the southbound lanes of Interstate 25 in Denver after a winter storm dropped up to a foot of snow in the metropolitan area on Jan. 1. Photo: David Zalubowski/AP

Finally, Stern said, never be too proud to turn back if the weather is too treacherous to continue.

"Some people are stubborn about getting where they are going, but sometimes it's better to turn around rather than to get in a really dangerous situation."

To read the original report and see related stories, follow this link to the MPR News website. https://www.mprnews.org/story/2022/01/05/npr-building-emergency-winter-driving-preparedness-kit