Megan Schnitker in her business Lakota Made in downtown Mankato, Minn. The store features products made from plants that Schnitker learned about growing up in Lakota culture and from years of research. The store is located a few blocks from the memorial to the 38 Dakota men who were hanged in a mass execution during the U.S.-Dakota War in 1862. Schnitker said that the store is seen by some Lakota as a place for healing from that tragedy.
Jackson Forderer for MPR News

Megan Schnitker learned from a young age that she could turn to nature’s medicine to ease many of the aches and pains she experienced while growing up on a farm in South Dakota.

“You're jumping on bales, you're playing in the creek, you're chasing cows and horses and all that other stuff. So things happen,” she said.

When she’d get injured, her uncle would show her which plants could help soothe her pain.

“My uncle Neil started teaching me about [healing plants] when we were pretty little because it was like, you know, as soon as the sun comes up, you go outside and play or you help do chores all day,” said Schnitker. “And so you know, cuts, scrapes, burns, all that other stuff happens, bee stings and bug bites, because it's the farm.”

She learned that plantain could help relieve foot pain. Goldenrod helps with digestion and lady’s mantle can be used to ease menstruation discomfort. That healing knowledge had been passed down through the generations from the elders of her tribe.

When she became an adult, Schnitker said her great-grandmother explained the role of medicinal plants in traditional Lakota culture.

Turning a passion into a business

As her interest in the healing properties of plants grew, Schnitker realized she wanted to share her knowledge with others.

In 2018, she launched Lakota Made from her kitchen and sold her homemade herbal soaps, salves and tinctures mainly at markets and festivals. 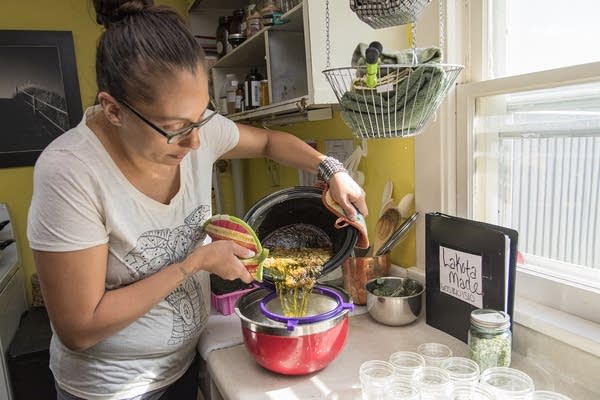 Megan Schnitker pours out infused oil into a pot while extracting flowers as she made a medicinal pain salve for her business Lakota Made in her home in Mankato in 2019. Schnitker said that growing up in Lakota culture helped her learn about the various uses of plants that she uses in her products, but she also did 10 years of research. Photo: Jackson Forderer | The Mankato Free Press

Then her husband suggested she sell her products online. Schnitker already had a large Facebook following and soon a flurry of online orders followed.

When she outgrew her home business, she opened a shop in Mankato’s historic Old Town.

She gathers plants found in her own backyard and on public lands to make her self-care products. She sells between 60 to 70 different items and Schnitker, who describes herself as an Indigenous traditional herbalist, makes all of them herself.

Since the products have not been evaluated or approved by the Food and Drug Administration, Schnitker is not allowed to say that they can cure or prevent disease.

Her store smells of herbal soaps infused with eucalyptus and lavender. Handmade star quilts hang from the ceiling. Shelves and tables are stocked with tonics and dried teas. 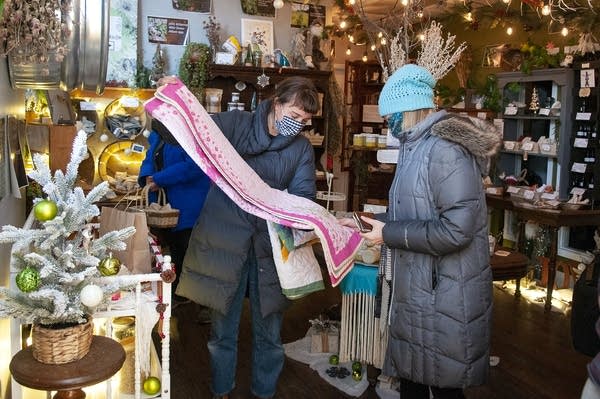 Allison Ellingson (left) shows Kelly Karstad a quilt at Lakota Made in downtown Mankato, Minn. The quilt is one of the few products at the store not made by owner Megan Schnitker, with the quilts supplied by her aunt.  Photo: Jackson Forderer for MPR News

"We have like 12 different blends of teas. And then we have infused honeys," she said.

In the store’s basement, employees package, tape and prepare shipments.

Dried plants and herbs hang from a metal fence, and freshly poured wax soap molds are set up to cure overnight.

When the shop opened in July, the basement production seemed big enough to handle the volume of orders — but not anymore.

"We've been joking about it, but it's really not a joke that we have outgrown this space," said Clare Carroll, an executive assistant who has been with the company since it operated out of Schnitker's home. "And so now we're trying to figure out what the next step is. It's been a crazy, crazy wild ride.”

But Schnitker is not ready to leave Old Town Mankato just yet. The store’s location was a deliberate choice. 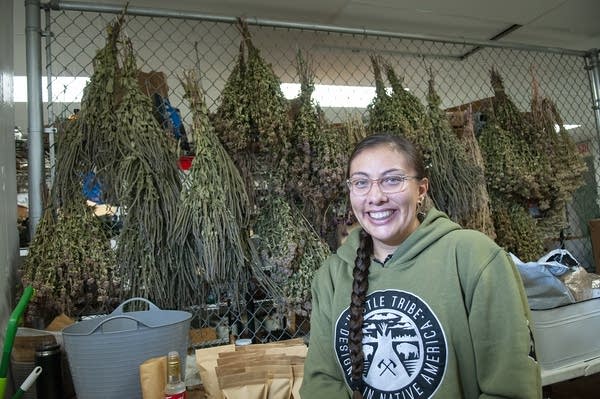 Megan Schnitker in front of the various plants that she uses to make her products for Lakota Made in downtown Mankato. Schnitker is also offering classes to teach others about Lakota traditions in natural health remedies. Photo: Jackson Forderer for MPR News

Reclaiming a place for Lakota people

Just a few blocks away is the memorial to the 38 Dakota men who were hanged in a mass execution during the U.S.-Dakota War in 1862.

Schnitker said Lakota elders and her family members were reluctant for her to set up her shop so near a site that represents so much pain for her people, but she said she is determined to reclaim a presence for Indigenous people and to help them heal.

Schnitker plans to host workshops and classes out of Lakota Made where community members can make their own products, and learn about the original uses of native plants.

She is also passing along her knowledge about the healing properties of plants to her children, who she says are learning more each day about their Lakota identity and to be proud of it.

"Because if we don't, we're going to lose it, you know, and I don't want to lose it,” she said. “I want to keep passing it down for all future generations." 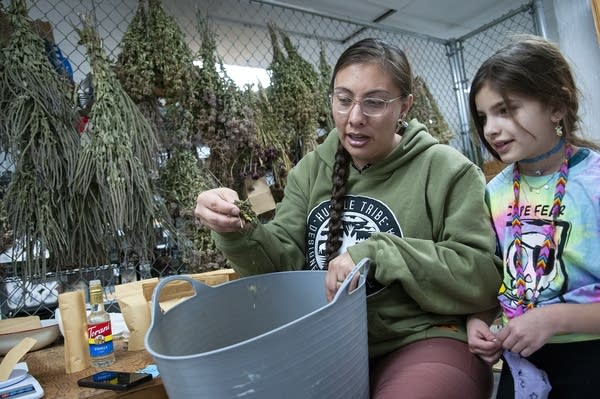 Megan Schnitker, owner of Lakota Made, talks with her daughter Aven Schnitker, 8, about all the different kinds of plants they use to create products for the Mankato business. Schnitker said that she hopes Aven will take over the store in the future. Photo: Jackson Forderer for MPR News
To see the original article and read related stories, follow this link to the MPR News website.  https://www.mprnews.org/story/2022/01/04/indigenous-woman-taps-lakota-healing-arts-to-launch-mankato...
Arts+Culture