Endangered mussels discovered in St. Croix River believed to be a century old Native, endangered spectaclecase mussels -- both living and dead -- are seen after they were found in the St. Croix River upstream of the dam at St. Croix Falls, Wis., in August 2021. Biologists estimated the mussels to be more than 100 years old. Photo: Ali Holdhusen | National Park Service
By Kirsti Marohn from Minnesota Public Radio News - December 5, 2021

Researchers recently made an interesting discovery in the St. Croix River: a cluster of endangered native mussels — some still alive — that they believe are more than a century old.

Native, endangered spectaclecase mussels -- both living and dead -- are seen after they were found in the St. Croix River upstream of the dam at St. Croix Falls, Wis., in August 2021. Biologists estimated the mussels to be more than 100 years old.
Ali Holdhusen | National Park Service

The discovery was amazing, scientists say, because the host fish the mussels need to reproduce have been blocked from getting upstream since the 1907 construction of the St. Croix Falls Dam near St. Croix Falls, Wis.

In August, biologists from the Wisconsin Department of Natural Resources, the University of Minnesota and the National Park Service searched a stretch of the St. Croix upstream of the dam.

They were looking for spectaclecase mussels, a species of native mollusks named for their elongated shape, like an eyeglasses case. They searched an area where the mussels had been previously found more than 30 years ago.

“Lo and behold, there we found them, in these rock piles up there above the dam,” said Lisie Kitchel, a conservation biologist with the Wisconsin DNR’s Bureau of Natural Heritage Conservation. “They have to be really old mussels, because their host fish no longer occurs above that dam. So they had to have been there — or from mussels that were there — before the host fish was lost.”

Some of the mussels were dead, but about eight were still alive, she said. 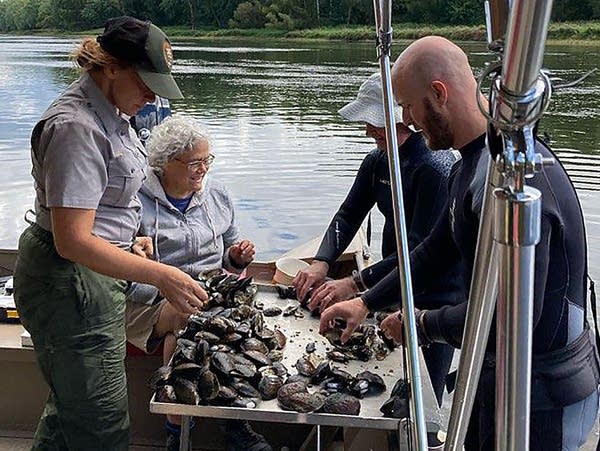 Typically, biologists can tell a mussel’s age by studying the growth rings on their shells, like a tree. However, these mussels were so old and their shells so eroded that scientists couldn’t see the lines, Kitchel said. They plan to examine cross-sections of the dead mussel shells this winter to determine their exact age.

Biologists believe they must be more than 100 years old, given the timing of the dam’s construction over a century ago.

Like other mussels, the spectaclecase expels larvae, known as glochidia, which must attach to a host fish’s fins or gills to continue developing into juvenile mussels.

Since the dam was built, spectaclecase mussels’ host fish — goldeye and mooneye — are no longer able to travel so far up river.

Biologists returned the live mussels to their river habitat. It’s doubtful that they are still producing glochidia at their advanced age, Kitchel said.

"Once this population goes, there's no way for them to reproduce,” she said. “We can propagate more spectaclecase and put them up there. But without the fish host, they're not going to keep reproducing."

Biologists have been working to restore native mussel populations in Upper Midwest rivers, including the St. Croix and the Mississippi, where many species of the mollusks had vanished.

Native mussels are filter feeders that can siphon 10 to 15 gallons of water a day, helping to remove pollutants from rivers and lakes, Kitchel said. They also excrete nutrients that are an important food source for other organisms.

Spectaclecase mussels are on the federal and state endangered species lists in Minnesota and Wisconsin. They face numerous threats including population loss due to dams, pollution, excess sediment that clouds the water and competition from invasive species.

Kitchel said the mussel discovery is a sign of the health of the St. Croix, one of the first rivers in the United States to be designated for protection under the federal Wild and Scenic Rivers Act in 1968.

“It has not had a lot of things that have destroyed the habitat or altered the habitat,” she said. “The water quality is just really good in the St. Croix.”

To listen to an audio version of the original story and read related articles, follow this link to the MPR News website. https://www.mprnews.org/story/2021/12/05/endangered-mussels-discovered-in-st-croix-river-believed-to...