An LGBTQ pride flag hangs in the Marshall Middle School Cafeteria on March 2, 2020 as part of an inclusivity project created by former principal Mary Kay Thomas. Since then, it was taken down by the Marshall school district after a settlement was reached by officials and a local group of parents and clergy when a student was disciplined for petitioning to take down the flag. Photo: Hannah Yang | MPR News

A school administrator has filed a federal civil rights lawsuit against the Marshall public school district for alleged discrimination after hanging an LGBTQ Pride flag in the school cafeteria as part of an inclusivity project. 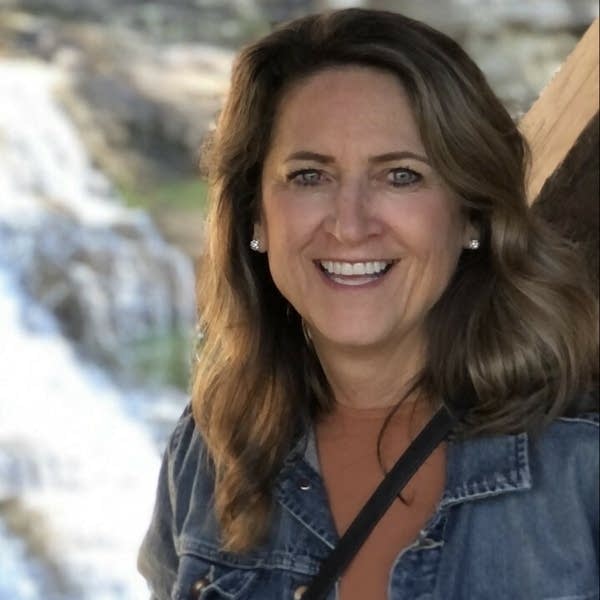 According to the complaint, a “small” group made up of parents, local clergy and staff attempted to have Thomas remove the Pride flag from the cafeteria. She declined and provided rainbow stickers for staff to support the Gay-Straight Alliance, a student organization.

Thomas told MPR News that she decided to file the lawsuit not just because her reputation was “stripped” from her, but also the broad implications the district’s message could have on students.

“I feel like the people who are losing are the kids,” she said. “They felt like once they had that flag up, that they were finally recognized as quality human beings. As soon as there was discussion and concern about whether or not that flag would come down, there were kids trembling across from me at my desk, and in pure tears, kids were leaving the school on those days because they couldn’t tolerate it.”

“The amount of turmoil that we put in the lives of these young people and somehow messaging them that they are not ok is just purely wrong,” Thomas said.

The complaint alleges that since the protest by the group in early 2020, the district engaged in a series of actions against Thomas, including “a bad-faith employment investigation, involuntary leave, suspension without pay, and notice of deficiency.”

The complaint also alleges that the district attempted to get Thomas to quit by removing her as middle school principal, and assigning her to a “special projects” position, which she still holds. Thomas says the district put her on a year-long performance improvement plan despite yearly contract renewals and positive performance reviews in her 34 years in teaching.

“I’ve worked for a variety of school districts and a variety of superintendents and school boards,” Thomas said. “And I’ve never, ever in my life come upon a situation that has accusations like and or that I’ve ever been treated so unprofessionally in my life.”

The district is required to respond within 21 days after the complaint is served.

Matthew Frank, an attorney with the Minneapolis firm Nichols Kaster, who represents Thomas, said the case “is a reminder that public-school employees do not give up their free-speech rights when they walk through the school-house door. More importantly, though, it stands for the humanity and dignity of LGBTQ students in Minnesota.”

In an emailed statement, Marshall Public Schools superintendent Jeremy Williams said the district couldn’t comment on the specific allegations in the lawsuit, but would “vigorously defend itself against them.”

Williams also said that the district "strongly denies any allegation of discriminatory conduct."

Marshall Public Schools reached a settlement in August with the group, Marshall Concerned Citizens, when a student was stopped from petitioning to take down the Pride flag. The district agreed to remove the flag and the plaintiffs dropped the lawsuit.

Students and parents of the LGBTQ community expressed concerns of feeling unsafe and unsupported following the settlement. Two advisors of the Gay-Straight Alliance at the middle school and high school resigned.

To see the original report and read related stories, follow this link to the MPR News website. https://www.mprnews.org/story/2021/12/02/principal-who-organized-lgbtq-flag-display-files-suit-again...