This Thanksgiving, let science help you roast a tastier turkey To get properly cooked dark meat without sacrificing a tender breast, some cooks choose to spatchcock their turkey before they roast it.  Photo: Derek Campanile | Dad With A Pan

I've got a kitchen confession: I don't do Thanksgiving turkey.

It's not because of dietary restrictions, although I do try to limit my meat consumption. It's more a matter of soul-crushing disappointment. Years ago, my family and I decided we weren't going to serve Thanksgiving turkey anymore because it kept turning out dry and flavorless.

What's the point of getting up super early and spending hours laboring and stressing in the kitchen if you're just going to end up with a bland bird?

I don't need that kind of holiday heartache.

And I am not alone in my turkey disdain. "It is one of the most boring and unflavorful pieces of meat," says cookbook author Nik Sharma. "And I think that's probably why everyone struggles every year with this bird."

But bad turkeys are a problem that science can actually solve. Which is why this year, I've decided to tackle the turkey tradition once again — this time, with the help of two cookbook authors well-known for demystifying the science behind good food: Sharma, a trained molecular biologist and the author of “The Flavor Equation,” and Kenji Lopez-Alt, a New York Times food columnist and author of “The Food Lab.”

As Lopez-Alt explains, the fundamental trouble with turkey is rooted in its anatomy. You've got two different types of meat that need to hit two different internal temperatures: the white breast meat, which needs to reach 150 degrees Fahrenheit, and the dark leg and thigh meat, which should hit at least 165 degrees — and ideally, 175 or so. But by the time the legs hit the right temperature, your breast is overcooked.

It all makes sense when you think about how turkeys use their bodies when they're alive. The white meat is made up of fast-twitch muscles — these aren't used often but are activated in short bursts. "Those types of muscles are generally low in connective tissue, low in fat and very strong. And what that means is that it's relatively easy to overcook them," Lopez-Alt says.

Meanwhile, the dark meat is made up of slow-twitch muscle fibers that the turkey is constantly using when walking around or standing, so it has a lot of connective tissue — which means you have to cook them at a higher temperature in order to break them down.

So how to solve this problem rooted in bird biology? Science to the rescue! Read on.

Understand the geometry of your meat and ditch your roasting pan

"It would be difficult to design a worse tool for roasting a turkey than a roasting pan because you're taking a problem that already exists and making it even worse," Lopez-Alt says.

In a roasting pan, the high sides shield the bottom of the turkey — the legs and thighs — from heat, meaning they take longer to cook to temperature. Meanwhile, the breast sticks up over the top of the man, which means it gets the bulk of the heat and dries out more.

So one simple hack for roasting whole birds is to choose a different kind of pan — a low-rimmed baking sheet with the bird propped on a v-shaped rack. Even better, place the baking sheet on a heated pizza stone. The heat will radiate up through the bottom of the sheet tray and help the thighs and drumsticks cook faster. (Here's a how-to guide.)

To really solve this dilemma, bring out the poultry shears.

Sharma and Lopez-Alt agree that the best way to fix this white meat/dark meat temperature conundrum is to ditch the idea of serving a whole turkey and chop up your bird instead. While it may sound sacrilegious to those who cling to a Norman Rockwell-vision of a Thanksgiving feast, it's actually the key to a better bird. 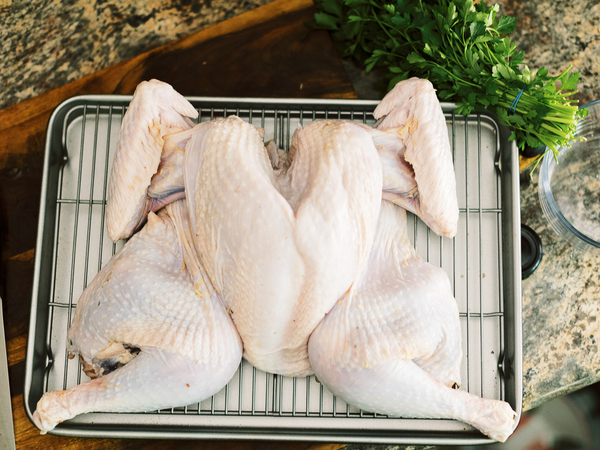 To spatchcock your turkey, you need to remove the backbone and flatten the bird.
Photo: Derek Campanile | Dad With A Pan

There are a few ways to go about this: If you've got the skills and tools, you can cut your turkey yourself using a technique called spatchcocking — that's where you remove the backbone so the bird lays flat. (Here's a helpful how-to from Lopez-Alt.)

Sharma notes you can also just buy the turkey cut up in parts.

The whole goal, really, is to get all the turkey parts to lay flat, so the breast and turkey legs and thighs all get the same amount of heat at the same time. The thighs and legs are relatively thin compared to the bulky breast, so they will cook faster. Which is what you want, because that dark meat is going to hit 175 degrees or so just as the breast is getting up to 150 degrees. "So it works out perfectly," Lopez-Alt says.

We've been focusing on better roasting tips, but of course, you want to brine your bird for maximum tenderness and flavor — something you've likely heard many times. "Salt is the most important thing in a brine because that's what's adding flavor. It's what's helping, helping build moisture inside," says Sharma.

Sharma explains that normally during cooking, some of the proteins in meat fibers tighten up so that they end up squeezing the juices out of the turkey — like water gets squeezed out of a sponge. But when you add salt, it loosens up the meat proteins so they hold on to more moisture, so your bird stays juicier.

Traditional brines are wet — they involve soaking your meat in a salt water bath. But Lopez-Alt says this can lead to a bird that, while juicier, is also watery, which can dampen the flavor. He prefers a dry brine, where you rub kosher salt and perhaps herbs and spices on the bird and let it sit in the fridge for a night or two before cooking.

Too lazy to brine? Buy a kosher turkey — these come pre-salted, so they're essentially already brined. 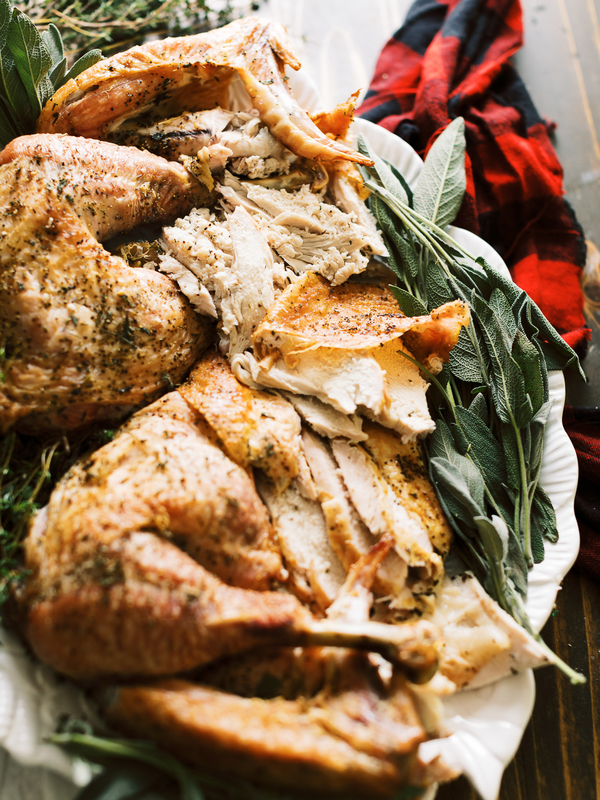 If you really want to give your turkey a science-based boost this year, Sharma says based on his kitchen experiments, one brine rules them all: fermented dairy. Think plain yogurt, buttermilk or kefir.

The key here is the lactic acid in these products. Sharma notes that animal muscles synthesize lactic acid on a regular basis, so their cells have evolved mechanisms to regulate how much of this acid they contain. He thinks that is why marinating in lactic acid tends to have a gentler effect on meat — leaving it tender but not mushy. What's more, dairy is also rich in phosphates, and Sharma says these are even better than table salt at promoting water-binding in meat.

Sharma, who moved to America from Mumbai, India, notes that dairy-based marinades are common in Indian and Middle Eastern cooking. "I find that fascinating historically," he says. "You see that wisdom without the scientific knowledge available today."

Want to give it a try? Sharma recommends this recipe for buttermilk-brined turkey from cookbook author Samin Nosrat. "It's pretty fantastic," he says.

Bonus: If you cut up your bird, it's much easier to brine, wet or dry, because you can just put the meat in plastic bags in your refrigerator, instead of having to clear an entire shelf for a big, whole bird.

Remember it's not really about the turkey

If your turkey still turns out a bit sub par, it's OK. Really. As Kenji Lopez- Alt said to me, holiday cooking can be super stressful, don't lose sight of what's important:

"As long as the turkey has got people around the table, then it's done its job no matter how dry it is."

Derek Campanile of Dad with a Pan contributed photos for this report. Find his full write-up of how he makes spatchcocked turkey here.

To see the original article and read related reports, follow this link to the MPR News website. https://www.mprnews.org/story/2021/11/21/npr-this-thanksgiving-let-science-help-you-roast-a-tastier-...