It’s a cold, dark Friday night in north Minneapolis. Classes at Patrick Henry High School let out hours ago. But the school auditorium is filled with dozens of students. They’re crowded backstage and fumbling with the sound system for a technical rehearsal of “Night of the Living Dead” — a zombie drama they’ve chosen for their school play.

Twelfth-grade student, Emily Tucker, a lead in the play, said drama club has been a lifeline for her this semester.

“Honestly, it’s like an escape. Being here, even though it’s school, it’s still — this feels like a whole different part,” Tucker said. “It just feels like a home away from home at this point. I’m always here.”

Finding something she’s passionate about has been key for Tucker’s mental health and connection to school this semester, coming out of the pandemic.

“It’s a daily struggle. It’s really important to talk about — school is still a struggle. And it’s not because the work is hard. It’s just because [of] low motivation,” Tucker said. “Every time somebody asks me what I want to do after school, I just want to cry because I do not know yet. And it’s really, really, really a struggle. Being alone is good, but then I come here and I feel like I don’t want to be alone.” 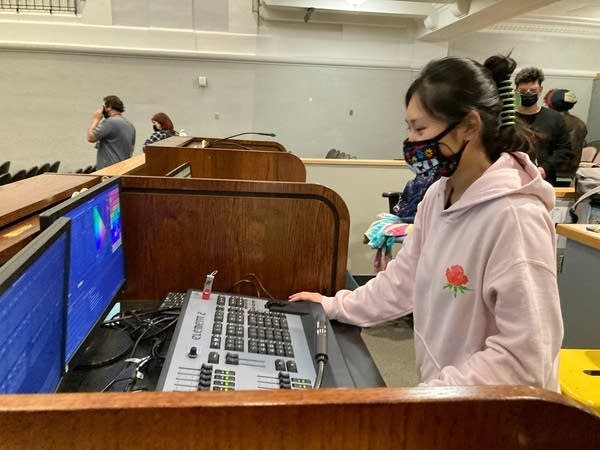 “There has been a significant increase in mental health crises since the pandemic started,” said Raghu Gandhi, a child psychologist and assistant professor at the University of Minnesota’s Department of Psychiatry and Behavioral Sciences. He said isolation, stress, closed schools and academic struggles are all having an effect on the students he sees in his practice.

“We are seeing a lot of teenagers who are coming to our ERs with depression, assessment of suicide attempts, self-injurious behaviors such as cutting and a lot of substance abuse,” Gandhi said.

School leaders around the state say they’re seeing these same issues in their buildings.

“In August, when students came to school, we were so excited to have them in person that we didn’t recognize or realize some of these social skills that they maybe had lost or not developed,” said Andrea Rusk, principal at Brainerd High School.

In October she sent a letter to families in her district, pleading for help with student behaviors she and her staff had never seen before. In the first three weeks of classes alone, she said there were three physical altercations. And then there’s screen addiction, increased substance abuse, vandalism, academic disengagement and conflict at levels of intensity she’s never experienced.

Rusk said she’s also seeing political and social tensions trickle down into student behaviors. There have been fights on social media, and at some point, Brainerd students started wearing flags to classes: political flags, LGBTQ flags, law enforcement flags. Rusk worried adult failures to communicate well about politics and other disagreements are affecting students. Kids “watch and hear the divisive context of our society,” Rusk wrote in a letter to families, “It is imperative we restore the basics of treating each other with respect and kindness to have a safe school.”

Rusk and her staff have been trying to promote the basics of physical and mental health to their students, but it’s much more challenging this year than they were expecting.

“We’ve got some barriers to that that we need to address together,” Rusk said. “I think a year and a half of being unstructured and lacking systems that they are part of — routines, clear expectations for behavior, also just a commitment to your community and to your school. They’ve been isolated. We need to, as a classroom, be respectful if we disagree. I think we’re making some headway with this now collectively with home, parents, guardians and school staff — us addressing it directly and consistently.”

Becky Mendoza, who’s co-president elect of the Minnesota School Counselor Association said these are issues that students and educators alike are struggling with across the state.

“These students basically have been kind of independent on their own for almost two years. And so they’ve developed a way to get through everything that’s happened in the last two years,” Mendoza said. “They’re in real tough spots. They’re feeling frustrated. There’s a huge lack of motivation, quite a bit of disengagement. A few of them even said, ‘It’s like we came back to school and everyone just expected things to be business as usual and nothing is the same and no one’s talking about it.’”

In her work with students, Mendoza tries to emphasize the importance of self-care and setting boundaries. She’s also found that when she treats kids as adults with agency, creativity and the ability to make good decisions for themselves, they do really well. 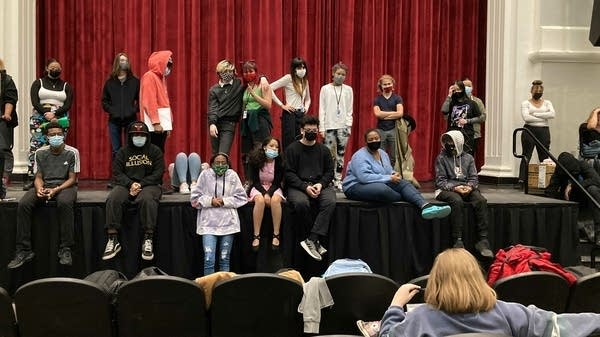 At Patrick Henry High School in Minneapolis, teacher Kaytie Kamphoff says the drama club is a place where her students are taking creative ownership.

“It’s fully student-run, really,” Kamphoff said. “Students are fully running sound and lights. Students are doing the makeup. Our stage manager’s a freshman. Our prop manager is a ninth-grader ... but yeah, they would live here if we would let them.”

Patrick Henry’s mental health clinic is full, but so is their drama club. A zombie theater production doesn’t fix the many problems students are dealing with. But for this moment in November, it’s providing community and a creative outlet in an otherwise really difficult season.

To listen to an audio version of the original report and see related reporting, follow this link to the MPR News website. https://www.mprnews.org/story/2021/11/18/experts-pandemic-taking-its-toll-on-minnesota-students-ment...
Student Voices