For kids in school, COVID-19 testing can be elusive Four days into this school year, Lesley Lavery found out her daughter's entire second grade class would be quarantined for two weeks due to multiple close COVID-19 contacts.

Her daughter is back in class now, but Lavery is on edge.

“Well, today they're at school, but tomorrow could be another two weeks away, you know,” she said.

Lavery is among parents with kids in the Saint Paul Public School District who want weekly COVID-19 testing done in schools because state health and education officials have strongly recommended it as a way to keep the virus out — and kids in — the classroom.

She said it’s unrealistic for the state to set that expectation without help from schools.

“My family has two cars. And we have two incomes, we have flexible schedules. We can go do testing once a week,” said Lavery. “But for other families that are working jobs that aren't 9-to-5 jobs, and that have transportation issues, or have kids at multiple schools, that can be really difficult."

COVID-19 cases and a host of other illnesses have exploded in schools this fall, as kids head back to class, in some cases unmasked. The state Health Department says it's seeing 3,000 new COVID-19 cases a week in children under 12, which is the highest it’s been in the pandemic.

To combat these cases, the state has adopted a set of best practices from the Centers for Disease Control and Prevention, that includes in-school testing protocols.

But not every district has adopted in-school testing plans, and only a handful are testing students on a regular basis. 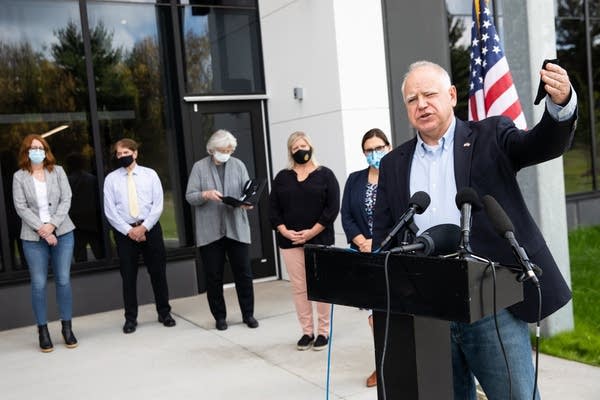 About 67 percent of the state's school districts, charter schools and tribal schools have accepted grant funding for COVID-19 testing programs from the state, says Stephanie Graff, an assistant commissioner with the Minnesota Department of Education.

Soon, private schools will be able to access that money, too.

"What we knew is that resources were going to be really critical in order to support and operationalize testing programs within our local school communities,” she said.

Graff said the grants can be used to staff up to test and to conduct contact tracing.

About 50 percent of Minnesota’s schools have ordered free COVID-19 tests from the state, which include rapid tests and spit tests that can be done at school or at home.

“There is some local flexibility and kind of autonomy right to our school districts in designing their own COVID school testing programs that are going to meet the needs within their school community and mitigate the spread of COVID,” she said.

Too many tests, not enough staff

But St. Paul Public Schools, as well as some other large districts including Anoka-Hennepin, are among districts that don't plan to offer students in-school testing.

In a letter to parents, SPPS said inadequate funding, getting parents to agree to testing and finding staff to conduct testing are among the reasons it’s not doing it.

"While we know that offering COVID-19 testing at school for students could identify further cases, the limited funding available coupled with other challenges (i.e. consent process, poor participation when offered previously, limited staffing capacity and sustainability of these efforts) make it unrealistic," the letter stated.

Those are common themes among members of the Minnesota Association of School Administrators. Routine COVID testing at school is something schools aren't able to do, said Executive Director Deb Henton.

"Our school districts across the state are experiencing severe labor shortages,” she said. "They are experiencing labor shortages with regard to staff that are willing to do the contact tracing and to contact families and with nursing staff. There are just not a lot of additional applicants out there for any position that they have posted."

But Henton stressed that many schools do have tests on hand for parents and teachers that want them.

"Our districts are definitely concerned about making sure that any student who is symptomatic or parents that request a test for the child that they provide that to the parents so that they can take it home," Henton said.

In the 600-student Adrian School District in southwest Minnesota, Superintendent Molly Schilling says that they've secured $40,000 to offer COVID-19 tests to any students or staff members who want one.

“It could be someone that just hasn't been feeling well. It could just be the parent requesting, maybe they noticed something, or maybe they knew [their child was] around someone and needs one, like a close contact and just some peace of mind,” she said.

The school can conduct rapid tests on site with parental permission. And they can send spit tests home with students, too. Since the start of the school year, Schilling said they have conducted about 40 tests and one has come back positive.

Schilling said even if her small staff could do routine student testing, she doubts people in her region would support the idea.

“I think if we would force and mandate weekly testing, I think I would have a lot of students looking to go somewhere else that wasn't forcing it,” she said.

The Bemidji School district has gotten more than $270,000 from the state to start an on-site rapid COVID-19 testing program for staff, said Superintendent Tim Lutz.

Based on his county's relatively low vaccination rates, he anticipates some of the 900 employees who work in his district will choose weekly testing over complying with a Biden administration vaccine mandate that is likely to cover many Minnesota teachers.

Right now, only about 55 percent of all people eligible for COVID vaccines in Beltrami County have gotten one shot — well below the statewide average.

Lutz says the state money will go toward hiring at least one person to conduct tests, as well as the tests and equipment to process them.

"It will be very time consuming for the health professional that administers these tests to conduct the testing, and then to do the follow-up procedures afterwards, which would include the contact tracing, which would include notifying the Department of Health of any positive cases that we do identify,” he said.

The district may open testing to students, but right now the focus is on staff.

But even as many districts are veering toward limited COVID-19 testing plans, a handful have opted for a free federal program that allows schools to test a pool of student samples at once.

Prodeo Academy, a charter school with two locations in the Twin Cities, is among them.

With more than 800 students — most of whom can't get vaccinated yet — the school has opted to test a couple of grades daily and repeat the process weekly, said Michael Kurhajetz, vice president of operations.

“The teachers take it to their classroom, and they give the sample collector to the kids and they bring all the samples back and then we send them off to the lab, we get results in about 24 hours.”

If a pool of tests come back with a positive result, Kurhajetz says they retest that pool only and then start the process of contact tracing and quarantining.

He says routine testing has been successful in keeping kids in school as much as possible — a priority set out by Prodeo families.

Kurhajetz says that, as with everything during the pandemic, the process takes time —

To listen to an audio version of this story and read related stories, follow this link to the MPR News website. https://www.mprnews.org/story/2021/10/11/for-kids-in-school-covid19-testing-can-be-elusive