As mountain biking booms, so does demand for trail builders In a remote northern Minnesota forest, Mica Harju uses what looks like an oversized hoe to place dirt and rocks along a new stretch of mountain bike trail carved through the woods.

“This is the real sexy part of trail building,” she said with a laugh. “Moving dirt. Moving rock.”

Harju’s husband, Adam, maneuvered huge rocks with a 3-ton excavator while she did the detailed, finishing work on the 3-foot-wide, hard-packed track designed to follow the contours of the land, swooping and flowing around banked curves, over rocks and through the trees.

“We’re trying to make it approachable for people that like to jump or want to learn how to jump,” Mica said. “To let their wheels get off the ground and feel a little bit of that butterfly in the stomach.”

The Harjus own a small trail-building company called Dirt Candy Designs in Grand Marais, one of several companies that have popped up in Minnesota and around the country to meet the growing demand for professionally built mountain bike trails that are being constructed nationwide, including this new 21-mile system of trails along the North Shore of Lake Superior.In the early days of mountain biking, cyclists rode on whatever trails they could find — old logging roads, cross-country ski trails, even game trails. Some riders hacked new trails through the woods, often illegally. Building a modern mountain bike trail is completely different.

This one’s overseen by the county forestry department and had to go through an environmental planning process.

Builders use different techniques to keep water off trails to prevent them from eroding. That requires expertise and meticulous work. It took the Harjus almost a month and a half to finish this 1-mile-long trail. And it’s expensive.

“I would say the sweet spot for high-quality, professional-built trail is in that $50,000 to $70,000 a mile [range],” said Mike Repyak, planning and design director for Trail Solutions, which designs and builds trails around the country for the International Mountain Biking Association

Repyak, who’s based in Madison, Wisconsin, said as the demand for trails has grown, new builders are popping up all over the country. “And we need that, we need a lot more planners and designers especially, and then builders, too. We’re still a really young industry.” 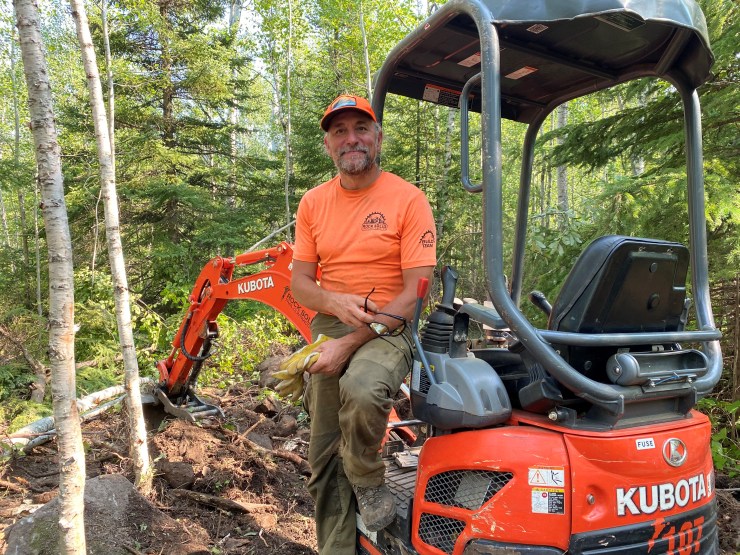 Blu Tenbrink of Rock Solid Trail Contracting takes a break on his excavator while building a new trail in the Split Rock Wilds trail system in Lake County, Minnesota, on Aug. 9. Photo by Dan Kraker

Builders range from small two-person teams like Dirt Candy Designs, all the way to big companies like Rock Solid Trail Contracting out of Copper Harbor, Michigan, which employs more than 60 people and also had crews building the new trails in northern Minnesota.

“There’s more work than we know what to do with,” said Blu Tenbrink of Rock Solid, while he took a break from running an excavator.

Tenbrink said good trail builders have an artistic flair, laying rock and carving winding trails amid the trees. He said he likes to create a space for bikers to “dance through the woods.”

Trail builders spend weeks at a time, even months, building one trail. They don’t just work all day in the woods — they live there, too.

During the summer, the Harjus work long hours, seven days a week, building trails. Then they retreat to their camper for a shower and a meal before hitting the trail again the following day. 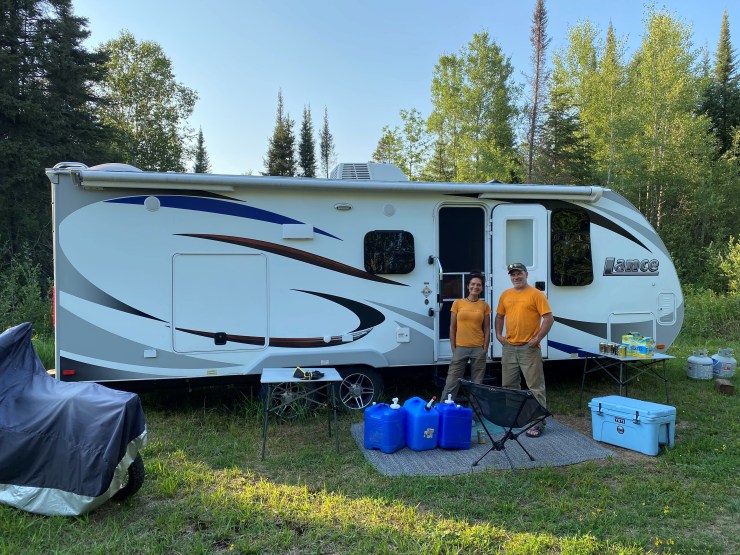 Adam and Mica Harju sleep in this camper for weeks at a time while they’re building mountain bike trails. Photo by Dan Kraker

Adam Harju started about a decade ago when he quit his job at a ski resort. A couple of years later, Mica Harju joined him. Since then, they’ve built trails in seven states, from Colorado to Arkansas to the upper Midwest. They’ve made enough money to buy expensive equipment, like the $30,000 excavator.

“But the reality is, like, you’re sweaty, you’re dirty. Mosquitoes are everywhere. So it’s definitely not roses all the time,” Mica said.

But as long as they continue to land trail-building projects around the country, and as long as she can do the physical labor, she said she’s in it for the long haul. Adam said he is, too.

“It’s definitely not lost on us how fortunate we are to be able to do what we’re doing, you know. It’s getting to make your craft and share it with people. It’s really special,” he said.

To listen to the audio version of see original story and read related reporting, follow this link to the marketplace.org website. https://www.marketplace.org/2021/10/07/mountain-biking-trail-builders-demand/