Four years ago, some two hundred people, many of them Dakota, gathered to celebrate the removal of the controversial "Scaffold" from the Minneapolis Sculpture Garden. The sculpture included design elements from the gallows used to hang 38 Dakota men in 1862. Its presence on Dakota land angered protesters who set up a camp around the garden until Scaffold was gone.

This weekend a new piece, created by Dakota artist Angela Two Stars, will open to the public in the same space. The structure, called "Okciyapi" is designed as a gathering place and a celebration of the Dakota language.

Just yards from the iconic Spoon Bridge and Cherry, water spills out from the center of Okciyapi. It's a bubbling dome of liquid about three feet across, surrounded by concentric rings designed to be many things: a labyrinth, somewhere for children to climb, maybe an informal language classroom. It’s a place that Two Stars, a member of the Wahpeton Sisseton Dakota, hopes will welcome visitors to come, sit, and think a while.

"The word Minnesota in Dakota is ‘Mni Sota Makoce,’ said Two Stars: “'The land where the water reflects the sky.’” 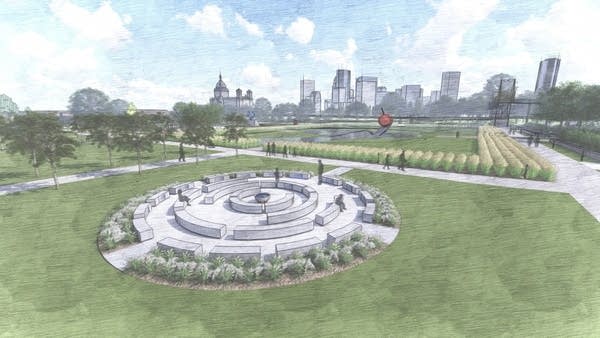 "Okciyapi" (pronounced OH-key-YUP-ee) was inspired by Two Stars’ late grandfather Orson Bernard, a noted scholar of the Dakota language who worked for years to keep it alive.

This whole piece is infused with the Dakota language, history, and tradition. The seats are inscribed with Dakota value words. Visitors can use their phones to hear tribal elders tell stories in English and Dakota.

The gravel round the structure absorbs daylight, and glows blue in the dark, giving a sense of surrounding "Okciyapi” with water. Even the plants around the perimeter have meaning.

"There's Prairie Dropseed, and also sage," said Two Stars. "So it's like the whole piece is surrounded by medicines, as I consider the Dakota language to be a medicine that acts as healing for the people that enter the space."

Two Stars says when she conceived "Okciyapi" she originally made no connection to the Scaffold controversy. It was only later that she realized her piece might offer help after a challenging time.

"It was hard to see that piece and I am glad that it didn't stay,” she said.

Originally from the Lower Sioux Reservation, St. Clair is a professor at St Cloud State, where she teaches Native arts and cultural expressions. When she first heard about Scaffold, and its references to the mass hanging of 1862, she says the fact it was designed to be climbed upon by visitors, maybe even as a picnic site, added to the horror felt in the indigenous community.

“What I think was more upsetting was that so few people were going to have the sort of the visceral, physical, emotional response that Dakota and other Native people were having to that piece," she said.

"We want to look forward," says Walker Executive Director Mary Ceruti. "But we can't move forward until we acknowledge and reflect upon and address what has happened in the past."

Ceruti took over at the Walker in 2019, two years after Scaffold's removal. The museum oversees the sculpture in the garden.

"The way that that work was acquired and installed and ultimately dismantled was traumatic for everyone involved. Obviously for our indigenous community and neighbors, but also for Walker staff and people in the Twin Cities in general," she said.

Ceruti says the Walker is examining its institutional history through the lens of recent events, and reconsidering how to better represent Native voices.

St Clair was on the Indigenous Committee created to help select Okciyapi. She likes how its concentric circles represent water rippling outward from a drop, a form inspired by the way Two Stars’ grandfather’s Dakota language teachings rippled through the community. St Clair thinks it's a beautiful metaphor that will connect with many people.

“Thinking about even their own ancestors, or their own descendants, what might they do that makes a ripple?” she said.

One final ripple: the title of the piece comes from Orson Bernard. It’s the advice he gave to those trying to learn the Dakota language: "Okciyapi," he would say. "Help each other."

To listen to the audio version of this story and read related articles, follow this link to the MPR News website. https://www.mprnews.org/story/2021/10/07/okciyapi-celebrates-dakota-language-and-bring-some-healing