The Boundary Waters Canoe Area Wilderness is now fully reopened to visitors, after a summer of closures due to wildfires.

Superior National Forest officials announced Friday that the last remaining closure order in the wilderness — related to the John Ek and Whelp fires — was now lifted.

“We have not seen any smoke from the fire for a couple of weeks now, and we feel comfortable lifting this closure as this fire is unlikely to spread much, if at all,” Patty Johnson, the forest's East Zone fire management officer, said in a news release.

Cooler conditions and recent rainfall have helped keep the fires in check, after a hot, abnormally dry summer caused extreme fire danger. That prompted a nearly unprecedented complete closure of the wilderness for a couple weeks, ending Labor Day weekend. A smaller closure order had remained in place until Friday.

Officials said Friday that the BWCA received 3 to 6 inches of rain in September — about normal for the month, though over the longer term the region remains in drought conditions.

Fire crews have now removed all pumps, hoses and other equipment that had been staged for the John Ek fire.

Meanwhile, to the south and outside the wilderness boundary, the Forest Service has scaled back the closure area around the Greenwood Fire.

That's as officials said Friday the fire has reached a maximum containment of about 80 percent. They said it's not possible to reach 100 percent containment, because of wetlands that prevent crews from building fire lines in some areas. 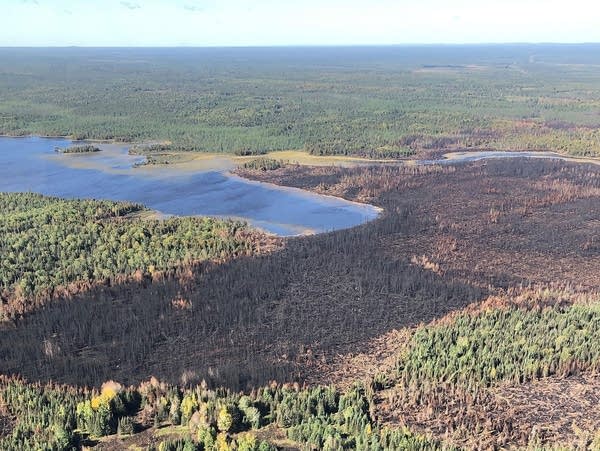 A section of forest burned by the Greenwood Fire, as seen from the air west of Isabella, Minn., on Sept. 20.  Photo: Superior National Forest | Minnesota Incident Command System file

The smaller closure order west of Isabella now largely follows the perimeter of the burned area, as crews continue to douse some hot spots and remove hazardous trees.

Landowners are allowed to access private property in the closure area. The McDougal Lake Campground and recreation areas remain closed.

The Greenwood Fire was first detected Aug. 15 and burned about 26,800 acres, destroying more than a dozen homes and cabins and several dozen other structures.