Dave Cizmas cranked his full-suspension mountain bike up a steep, rocky climb on the new Split Rock Wilds trail in a section of remote forest along the North Shore of Lake Superior.

"Yeah, it makes you work for it to get in here,” he said at the top, breathing hard. “We're just using the terrain, and the terrain is rugged.”

Then he descended to a feature dubbed “Joe’s Diner,” named after the trail designer who built it. It’s an 850-foot-long rock garden at the base of a cliff that's made of huge rocks that were too big for the trail builder to move — so instead he built the trail around it, piecing the rocks together like a giant natural jigsaw puzzle.

"The idea with this trail system is to bring Minnesota riding up a notch or two,” explained Cizmas, the recreation forester for Lake County who’s overseeing the development of the trails between the small town of Beaver Bay and Split Rock Lighthouse State Park.

“We really don't have anything like this in Minnesota. You'd have to go to Michigan or the Black Hills to find anything even remotely this challenging,” he said, adding that his goal is to not only provide a place for local cyclists to ride, but also to lure more advanced riders from around the state and beyond.

Split Rock Wilds is the latest addition to what, in just the past decade, has grown into 250 miles of new trails in northeastern Minnesota.

The trail projects have been pushed forward by local cycling groups in Duluth, the Iron Range and on the North Shore, and feature modern trails built specifically for mountain biking, that follow the contours of the landscape, often creating a flowy, roller coaster-like experience. 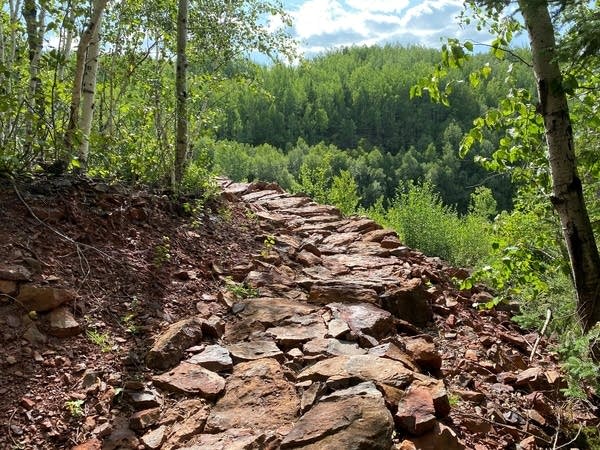 But what’s made them possible on such a large scale, in such a short amount of time, is millions of dollars in public funding, largely from state grants funded by sales tax and lottery proceeds.

Late this summer Linnenburger is overseeing the construction of new downhill trails at Giant’s Ridge in Biwabik that have turned the ski area into the largest chairlift-served mountain bike park in the Midwest.

"While mountain bike trails are booming in the rest of the country,” he said, “it's not even in close to the same league as what's happened in Minnesota over the last five years."

The boom can be traced to the Cuyuna Country State Recreation Area 10 years ago, when 25 miles of trails were first carved into the red dirt around old iron ore mines east of Brainerd.

When the trails first opened in 2011, about 18,000 cyclists rode them, said Aaron Hautula, former president of the Cuyuna Lakes Mountain Bike Crew, and one of the region's chief mountain biking advocates. 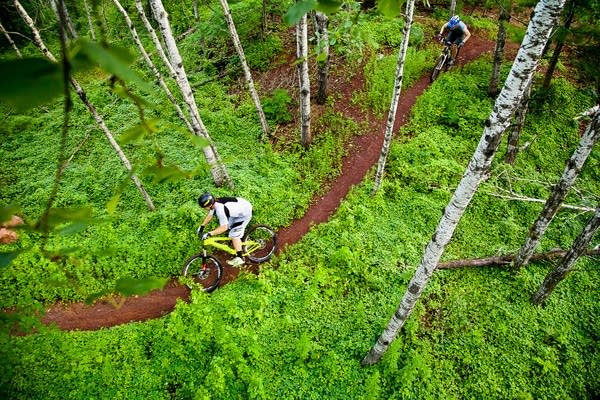 The mountain biking boom has sparked an economic revival in the tiny towns of Crosby and Ironton, where more than 20 businesses have opened.

"And these aren't just little tiny businesses on the side,” Hautula said. “These are Main Street businesses that have put a million [dollars] plus into a building. And … as [Main Street] properties become available, they sell."

Long-time cycling advocate Gary Sjoquist, who founded Minnesota Off-Road Cyclists and the Minnesota High School Cycling League, said that mountain biking in Minnesota “can be traced to before Cuyuna and after Cuyuna.”

“It helped legitimize mountain biking as a recreational outlet in Minnesota, and it convinced the DNR, convinced state legislators, county commissioners, that this is something that we could leverage to improve the quality of life in our area,” Sjoquist said.

Three mountain bike parks have also been built on the Iron Range in the last few years, funded in part by a $5 million allocation from the state development agency Iron Range Resources and Rehabilitation (IRRR).

Commissioner Mark Phillips said a story he heard from the administrator of a hospital near Cuyuna convinced him of mountain biking's potential to spur economic growth. Phillips said he knows how hard it is to recruit doctors and other professionals to rural areas. 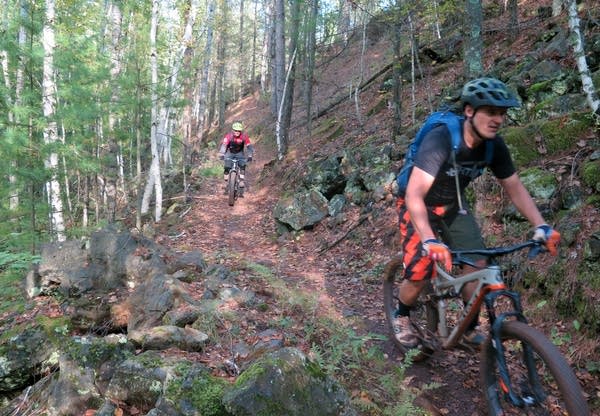 "And here, this guy has people calling them saying, ‘Can I come to Crosby?’ So I thought to myself, ‘This could be a game changer.’"

Phillips said he’s heard from the skeptics, who argue that money would have been better invested in traditional industries that could have created more jobs.

But Phillips said improving the region’s quality of life is an equally important focus, because people increasingly want to live and work in desirable places.

"People live where they want to live, especially now with technology and telecommuting. I want to create a higher, a better quality life on the Iron Range. So people want to live here, and then they'll start businesses ... and I think the mountain biking thing is just one component of that."

A place Phillips believes could be the next game changer is Redhead Mountain Bike Park. IRRR invested nearly $2 million create 25 miles of trails outside Chisholm that descend into an abandoned mining pit, lined with steep red cliffs, with a 300-foot-deep aqua blue lake at the bottom.

The trails are covered with the crushed red rock that miners clawed through to access the iron ore that was used to win World War II, said Jordan Metsa, marketing coordinator at the Minnesota Discovery Center, where the park is located. "They're literally riding right through Minnesota history.”

More than 25,000 people have ridden the trails since they opened last summer. Metsa looks at the cars that fill up the parking lot on a late summer afternoon, and points out license plates from Missouri, California and Oregon.

"Those are people who would have never come to Chisholm if Redhead Mountain Bike Park wasn't here,” he said.

“Here in northern Minnesota, in Chisholm, we've been a drive-by town since the mining boom left here in the ‘60s and ‘70s. Now we have repositioned ourselves as a recreational destination."

These trails were more than 12 years in the making. Pete Kero, Vice President of the Iron Range Off-Road Cyclists, remembers peering longingly over the mine fences that were built around the area, covered in “no trespassing” signs, and thinking, “Boy, there's a beautiful mountain bike park yet to be developed behind those mine pit fences.”

But state law forbade any access on mine property, for safety reasons. Kero, who’s an environmental engineer by day, kept pushing his idea for years, talking to countless local officials, presenting at endless meetings, until finally, the law was changed, and funding was allocated.

He knew the price tag was worth it was when he recently met a fellow rider on the trails from the Twin Cities.

"And he said, ‘Well, where are you from?’ And I said, ‘I live in Hibbing.’ And he said, ‘You are so lucky!’ And I thought, ‘When was the last time somebody told me I was lucky to live on the Iron Range?’”

To Kero, he said that tells a story that they’ve built something more than just mountain bike trails, but also something that benefits both tourists and locals, that creates unique outdoor recreation opportunities and economic development. 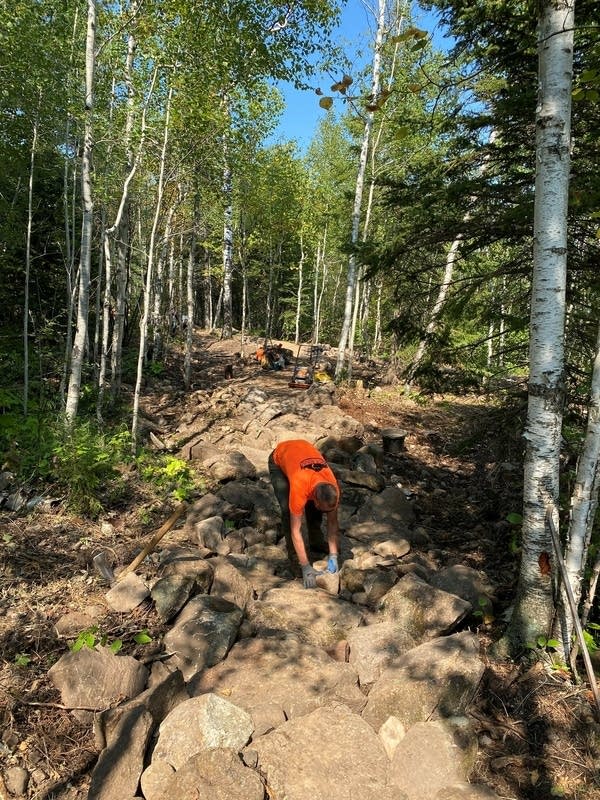 Scott Linnenburger, the Boulder-based trail consultant, said he’s spent so much time in Minnesota recently overseeing trail building that his friends back home keep asking him — are the trails in Minnesota really any good?

While he conceded they don’t offer the same grand vistas that trails in Utah or Colorado boast, he said, “My honest answer to them is the trails are a lot better to ride in Minnesota than they are in Colorado.”

“These are purpose-built trails for mountain biking, and there's nothing that holds people back. They're accessible to all levels of riders, all levels of fitness and they're sculpted trails. They're not this old logging road that we're still using as a trail. This is made for, and by, mountain bikers."

To see the original report and read more outdoors reporting, follow this link to the MPR News website.  https://www.mprnews.org/story/2021/09/23/rugged-terrain-lures-mountain-bikers-to-northeastern-minnes...