A wildfire rages in Castlegar, B.C. Poor air quality is only one of the consequences of wildfires that people living near and far from the fires must deal with. Photo: Submitted by Stefanie Harron/Castlegar Photographic Arts Society

For 53-year-old photographer Stefanie Harron, the past few weeks have felt like living in a smoky, fiery hell.

The air in her hometown of Castlegar, B.C., has been thick with smoke as wildfires rage nearby. Her neighbour's house is barely visible though a mere 25 metres away. Her eyes water and her asthma and chronic obstructive pulmonary disease (COPD) make the simple act of breathing a challenge.

Instead of using her puffer once or twice a week, she's now using it four to five times a day.

"The air, thick with particulates, makes me want to vomit," she said. "The first thing you notice is the taste before the acrid smell. I would compare it to living in an ashtray.

"Every breath without a respirator is like short gasps for air. [I'm] almost scared to take a deep breath knowing it will result in coughing and make it worse and more difficult."

Harron is not alone. As roughly 250 fires rage across the province, tens of thousands of people have been exposed to poor air quality, and it's particularly difficult on those who have health issues. Another 200 wildfires burn across the country.

Climate change is expected to exacerbate wildfires, with estimates of anywhere from a 74 to 118 per cent increase in Canadian land burned by 2100.

And though the risks from smoke are among the biggest worries, there are also less-obvious health concerns such as the impact on mental health and clean water to consider.

Scientists examining air pollution — including that produced by wildfires — study various types of emissions, but among those most commonly measured is particulate matter (PM), specifically PM 2.5.

PM 2.5 are fine particles measuring roughly 2.5 micrometres and smaller. Inhaling them can affect the lungs and heart, which can exacerbate existing health issues such as asthma or heart and lung disease.

The immediate effects may be obvious, but doctors are also trying to better understand the long-term impact.

"Four of the past five summers in British Columbia have had significant wildfire smoke events. And ... we're not really sure what the long-term health consequences are for populations who are exposed this way, sort of season after season," said Sarah Henderson, the scientific director of environmental health at the British Columbia Centre for Disease Control.

"There's the potential for these big and significant wildfire smoke exposures to affect the health of those individuals throughout their lives."

And those particles aren't just concerning for those who live near the fires. Smoke can travel far from its source, sometimes traversing the globe.

"For the Fort Mac fires [in 2016], they had smoke as far away as the Ukraine that they could trace back to the Fort McMurray fires."

Here at home, on July 19, Environment and Climate Change Canada issued an air quality advisory for southern Ontario, including Toronto, as well as Ottawa as smoke from wildfires in northwestern Ontario blanketed the province. A week later, parts of Quebec, including Montreal, were put under a similar advisory.

And then there is the impact on mental health. Wildfires sometimes force people to be evacuated from their homes, causing high levels of stress. Those who live in areas where the air is thick with smoke may also be forced to remain indoors for long periods of time. In addition, there may be other hidden costs, like a run on asthma medication. 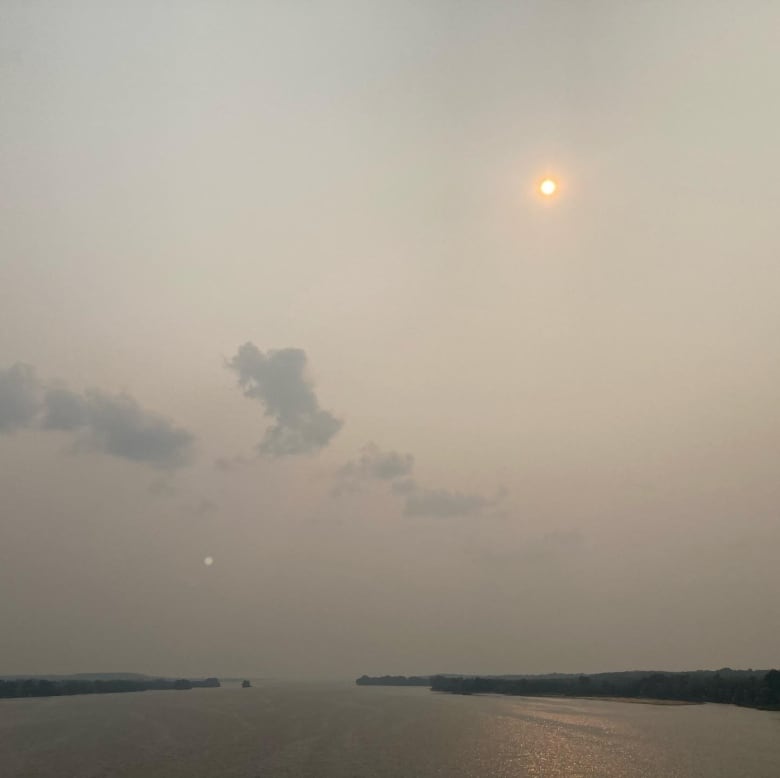 An orange sun is seen in the sky at Tyendinaga Mohawk Territory, roughly 12 kilometres southwest of Napanee, Ont. Photo: Submitted by Malcolm Park

Courtney Howard, an emergency physician in Yellowknife and past president of the Canadian Association of Physicians for the Environment, was involved in a study that interviewed 30 residents in Yellowknife, which experiences wildfires every year. In the study, they were asked what it felt like to live through a long period of smoky air.

"What people told us was that they felt anxious and irritable," she said. "They were cooped up, had that cabin fever … lots of comments about the decrease in physical activity. And so, of course, what that means is that people lose the treatment benefit that we know we get from being outside in nature, exercising."

At one point, the mayor of Yellowknife opened up an indoor exercise space so people could be active in a well-ventilated area, said Howard. It's something she believes officials might need to consider in a future with climate change.

Impact on the environment

The particles that waft into the air affect more than just physical health. Those particles also land on trees, plants, buildings and end up in water.

Ash, sediment and minerals not only flow into streams and rivers, but also downstream into lakes and reservoirs, potentially affecting drinking water and contributing to algal blooms.

The good news is that in Canada the water purification systems are able to filter them out for the most part. But the added strain on the system means that it may cost more to handle the higher level of contaminants.

"The issue around fire and drinking water is not — and I have to emphasize not — generally an issue of, 'Am I drinking something with some sort of toxic contaminant in it?'" said Monica Emelko, a professor in the University of Waterloo's civil and environmental engineering department.

"It's rather an issue of: 'If toxic contaminants get into the water, will you be able to have something running out of your tap that you can use?' … When we have these disturbances on the landscape, that really pushes our ability to do that in a cost-effective way."

There are also effects on ecosystems, says Uldis Silins, a professor of forest hydrology at the University of Alberta in Edmonton. For example, as sediment and minerals flow into water they can upset the chemical balance in a lake.

"One of the things that we've seen repetitively is very large impacts on things like sediment," Silins said. "Unlike other kinds of disturbance pressures we might be thinking about, the scope of those impacts was not a 30 or 50 per cent kind of increase in sediment production, they were hundreds of percentages or thousands of percentages, so, orders of magnitude increases in those contaminants."

And as humans rely on those ecosystems, there may be other consequences, such as the impact on fish in lakes that are eaten.

"I don't think it's bold of me to say we're in a climate emergency. And everyone needs to be aware that this is happening," said Health Canada's Eyamie. "The models may not be 100 per cent accurate, but they'll be accurate enough that this should be cause for concern for everyone."

To see the original story and read related articles, follow this link to the CBC News website.  https://www.cbc.ca/news/science/climate-change-wildfires-health-1.6122363