Researchers are trying to better understand the climate history of the Red River Valley by exploring the bottom of the muddy river.

On a recent outing, North Dakota State University extension forester Joe Zeleznik sat in the front of a small flat-bottomed boat, scanning one bank while NDSU graduate student Matthew Schlauderaff steered the boat and scanned the other bank.

They were looking for oak trees buried in the mud. 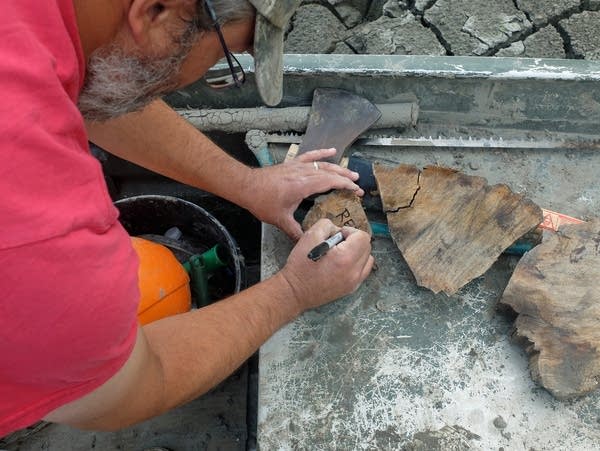 Joe Zeleznik writes an identification number on a piece of an oak tree pulled from the Red River. After the wood is dried and sanded smooth, the tree rings will be carefully measured to collect data about past climate events. Photo: Dan Gunderson | MPR News

"Oaks are really neat for a number of reasons,” explained Zeleznik. “One is they are really long-lived. The second is that their wood is more decay resistant than the other species we have around here. But the third thing is that they show floods in their rings."

It’s slow muddy work. When they spot a decaying tree they suspect is oak, poking out of the bank, Zeleznik uses a hand saw to cut a small sample.

“Nope,” he said as he examined the piece, “probably green ash.”

They've covered 180 river miles so far, after starting last summer. The Red River winds some 400 miles between its headwaters at Wahpeton-Breckenridge and the Canadian border.

"And what we're looking for ideally is a log where the wood is black. That tells us that it's been buried a long, long time. So far we've found three," said Zeleznik.

One has been radio carbon dated to the early 1600s.

They’ve also collected samples from live oaks along the river and from still standing log cabins in the Red River Valley, some built in the mid-1800s of oak trees that were more than 200 years old when they were cut down.

One tree found in a river bottom had nearly 500 years of growth rings.

Just two years ago, this project was on hold because the water was too high. Drought has the Red River at below normal levels, exposing trees long hidden.

When the researchers find an oak just visible above the surface of the knee-deep river, Zeleznik jumps into the muddy river with a chainsaw, and with water flying, cuts a small slab from the tree.

The pandemic slowed the data analysis, but when these slabs of wood are dried and sanded smooth, they will be sent to a University of Minnesota lab where associate professor of geography Scott St. George will do detailed measurements of the tree rings.

“It gives us perspective that we can't get from our own personal lives or our own career, and allows us to think about how the Red River Basin has changed, not over a few decades, but a few centuries,” he said.

The information in the growth rings of these old trees can also provide some practical data.

St. George said many communities are preparing for the worst case floods based on little more than a century of data collected by observing river levels. 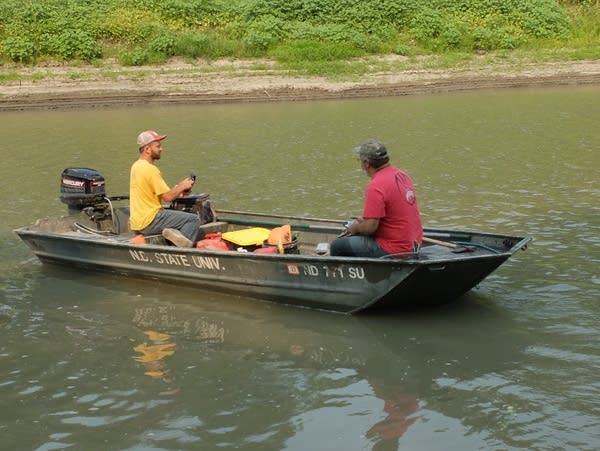 "And so I think if we're honest with ourselves, that information doesn't give us a very firm picture of what a very big very rare flood is," said St. George.

And the tree rings will show more about climate than just the big flood events. Zeleznik says they can also extend the known record of droughts in the region, because each tree ring is a record of rainfall for that growing season. 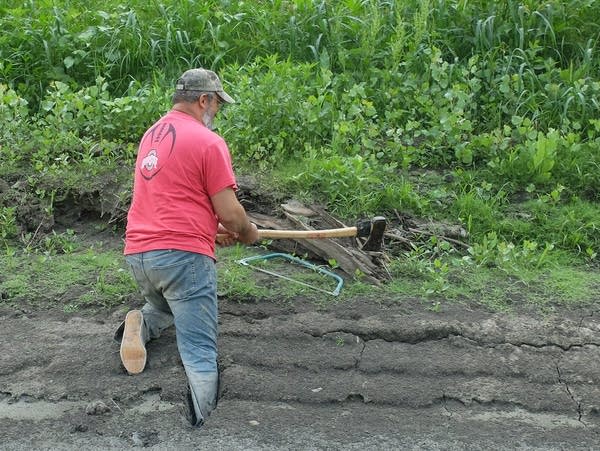 "If we're able to use tree rings to understand our history of drought, and the rhythm of drought in this part of the Northern Plains, then we're more likely understand why it happens and what the odds are for happening again," said St. George.

Zeleznik will try to cover as many river miles as possible this summer, taking advantage of the low water, hoping to find a tree that dates as far back as the 1400s.

"It's hard work. It's a long slow haul. It's a lot of mud. It's a lot of persistence. But hopefully we can start to fine-tune the chronology for this area,” he said as he scanned the bank for the next potential trove of climate data. “If we can get 6 or 8 miles done in a day, I'm happy. Just gonna take a lot of days."

To hear the audio version of this story and read related reports, follow this link to the MPR News website.  https://www.mprnews.org/story/2021/07/30/finding-climate-history-in-the-river-bottom