Minnesotans urged to take care of themselves, others during extreme heat Lamont Marable buys a cool drink and ice cream during a heat wave in Minneapolis on June 8. With high heat and humidity expected over the next couple of days and an excessive heat watch in effect for the southern half of the state, experts advise Minnesotans to stay cool, hydrate and watch out for others.  Photo: Tim Evans for MPR News file

Much of Minnesota, from south of St. Cloud to the Iowa border, is under a heat advisory. Extreme heat and humidity will significantly increase the potential for heat-related illnesses, especially for people working outside. And it’s going to get even hotter Wednesday.

National Weather Service meteorologist Caleb Grunzke says Minnesotans in much of the southern half of the state need to be on guard.

“It's going to be hot through Wednesday so just the continued heat puts a lot of stress on people,” Grunzke said. 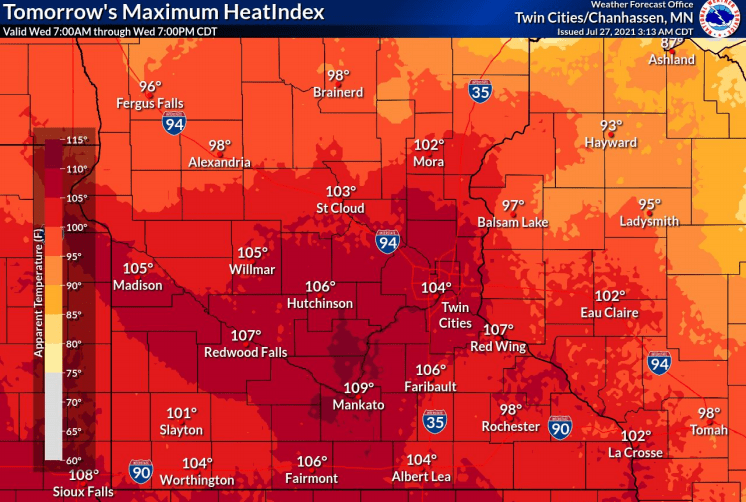 Hot and humid, temperatures will be in the mid to upper 90s and heat indexes will reach above 100. Even sundown won't offer much of a cool-down for homes. Lows will be in the 70s.

"Typically when it's hot outside not only can you see the heat-related illness, but we also then see the illness to people being active so water sports and people being outside," says Hennepin Healthcare emergency medicine doctor Stephen Dunlop.

People should drink lots of water and avoid alcohol, he says. Also, stay inside if possible.

Dunlop says signs that someone is moving from being uncomfortably hot to sick include profound weakness, confusion, irritability and difficulty walking.

"Kids may not be able to express to us their amount of discomfort with the heat or how they're doing. Their bodies don't regulate heat quite as well as adults,” he said. “So we just need to be really extra special careful with children, especially kiddos less than 5 years of age.“ 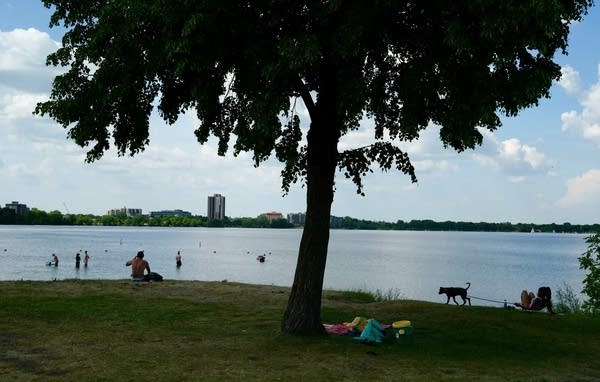 Beach goers rest in the shade along the shore of Bde Maka Ska in Minneapolis. Photo:  Tim Evans for MPR News file

The Executive Director of the Minnesota Board on Aging Kari Benson says people should keep seniors at the top of mind in extreme weather, knowing many live alone. Make sure, she says, they know of the danger and available help.

“It's so important to stay connected and to reach out to older neighbors, older loved ones to just check in on them,” she said. “See if they need anything, especially if they don't have access to an environment that is air-conditioned, you know, making sure that we are all doing what we can to keep each other safe."

Another particularly vulnerable population during extreme weather is people experiencing homeless. Michelle Perrin works with Minneapolis-based St. Stephen’s Shelter. She says people on the street with chronic health conditions such as asthma and heart disease can become seriously ill if they can’t keep cool.

She says more shelter beds and other places to cool off are being made available to them.

“Our outreach team is going out and doing wellness checks on folks where they know people are staying, responding to community calls,” she said. “They're distributing water, helping connect folks to those extra shelter beds that have been offered by shelter providers in Hennepin County, letting folks know where to go to get out of the heat."

The NWS says conditions will cool down to the 80s later in the week. Still, though, it's expected to remain relatively dry which will continue to pose wildfire threats, stress crops and strain water supplies in much of the area.

To listen to the audio version of this story and read related reporting, follow this link to the MPR News website.  https://www.mprnews.org/story/2021/07/27/minnesotans-urged-to-take-care-of-themselves-and-others-dur...