Matt Hudson (right) and Reane Loiselle (left) slowly navigate the shallow waters of Chequamegon Bay as they approach Fish Creek July 16 while in Chequamegon Bay on Lake Superior near Ashland, Wis. This summer scientists are studying Lake Superior to try to determine what's causing a spike in blue-green algae blooms in one of the world's deepest and cleanest lakes. Photo: Derek Montgomery for MPR News

A couple weekends ago, Cody Sheik was at a friend's wedding on Duluth's Park Point, sipping champagne down on the Lake Superior beach, when he spotted something unusual in the normally crystal clear water.

"It was definitely a bloom,” he recalled. “It’s indescribable. Chalk-green, when it should be nice and clear."

Sheik would know. He’s a microbiologist at the University of Minnesota Duluth's Large Lakes Observatory who studies blue-green algae blooms. He snapped some pictures, but he didn't have anything to take a sample.

Luckily, there are a lot of scientists who study lakes in Duluth. That same night, a mile down Park Point, Sheik said another limnologist was swimming in the lake.

"And they noticed it and they actually took an ice cream container” to collect a small sample, he said. 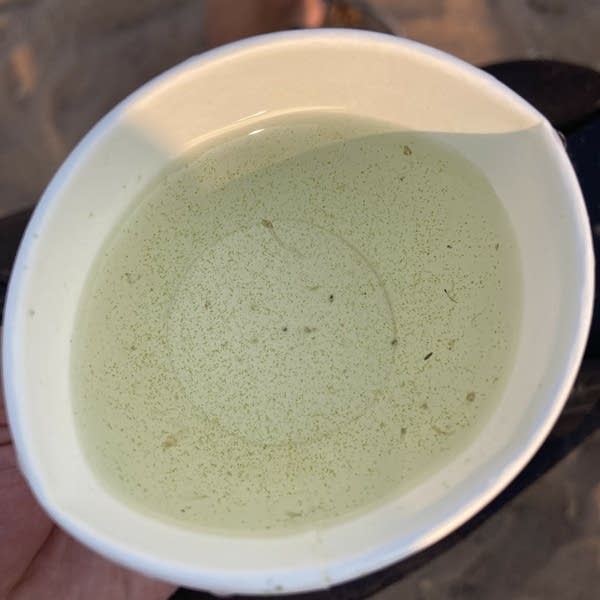 A sample of the bloom collected near the shoreline on July 17.  Photo credit Cody Sheik

And sure enough, in the lab, researchers at UMD confirmed it was cyanobacteria, the stuff that forms harmful algal blooms.

The blooms often look like thick pea soup or green paint floating on the surface of the water. They can be smelly and sometimes they're toxic. They're believed to have killed at least 20 dogs in Minnesota since 2004.

In 2014, Toledo, Ohio had to stop pumping drinking water from Lake Erie for a couple of days because blooms had poisoned the water.

More than 10 years ago, Sheik’s discovery along Park Point in Duluth — in notoriously cold and stormy Lake Superior — would have been unheard of.

“We often associate algal blooms with calm, warm, stagnant water,” explained Brenda LaFrancois, an aquatic ecologist with the National Park Service. “Certainly not the type of environment that we think of when we come to a place like Lake Superior.”

There have been a few anecdotal reports of blue-green algae on Lake Superior over the years, but the first confirmed sighting was in 2012, following a massive rainstorm that dumped up to 10 inches of rain on Duluth, causing destructive flooding.

There were a few minor blooms in subsequent years, but nothing extensive until 2018, when another huge storm caused serious flooding, this time in northwestern Wisconsin. 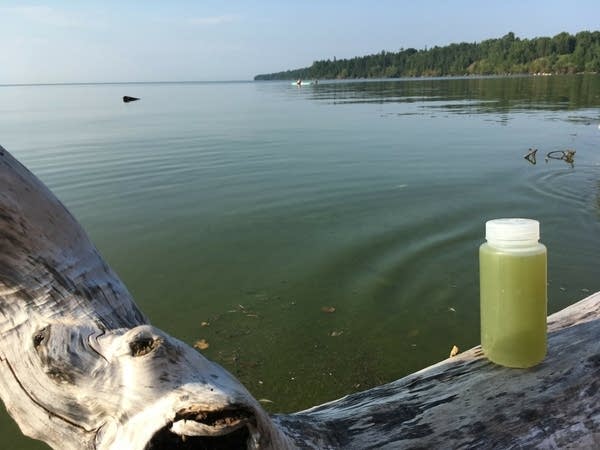 A water sample is set on driftwood near Cornucopia Beach in August 2018
Photo credit: Brenda Lafrancois

Soon after, a blue-green algae bloom stretched for parts of 50 miles along the south shore of Lake Superior, from the Apostle Islands to Superior, Wis.

“Big portions of it turned really opaque green, like melted crayon-green,” described Bob Sterner, director of UMD’s Large Lakes Observatory. “And that's when we knew we had something going on that we really needed to get to the bottom of.”

So far, Sterner said, researchers have not found evidence of toxicity in any of the blooms on Lake Superior. But, he stressed, that doesn’t mean that’s not a possibility in the future.

Scientists believe there’s a strong link between the growing number of blooms on Lake Superior and climate change.

Blue-green algae needs nutrients to grow, especially phosphorus, which gets washed from the land into the lake during extreme rain events, like those in 2012 and 2018.

"We know that those blooms did occur in years that had pretty catastrophic flooding in the region — 500 to 1,000-year precipitation events — and flooding from the tributaries," explained LaFrancois.

Scientists also know that the algae thrives in warm water. And Lake Superior is one of the fastest-warming large lakes in the world. UMD researchers have found that summer surface water temperatures in the lake have increased by five degrees over the past 30 years.

"We know that blooms tend to happen in years that have warm springs in early summer,” added LaFrancois. “So years where the lake started warming up early, and continued on that trajectory to have warm summer water temperatures.”

But scientists are still working to better understand the precise mix of factors that determine when and where blooms on the lake. And this summer is a crucial part of that effort, with researchers from universities, state and federal agencies from around the region undertaking a coordinated effort to intensively study and monitor Lake Superior. 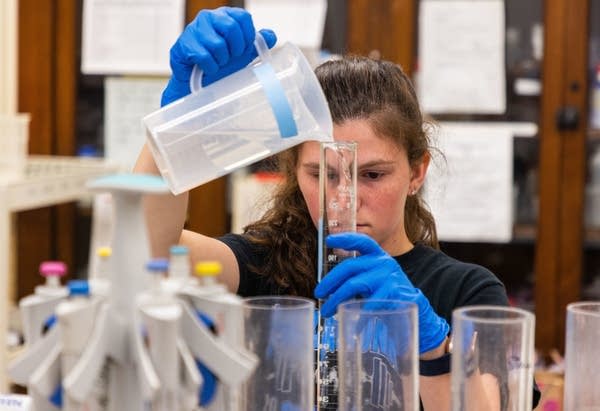 Her destination was called, simply, CB-1, a spot a quarter mile or so offshore, in 17 feet of water — one of 31 sites along the South Shore of Lake Superior that a team of researchers is sampling on six different days throughout the summer.

Loiselle drops a tool called a water quality sonde into the lake; it’s shaped like a big magic wand, attached to a steel cable that she slowly lowers down through the water. The sonde is ringed with sensors, which every two seconds gathers data like water temperature and the amount of algae in the water.

She also collects water samples to take back to the lab, where researchers will look at everything from the tiny microbes that live in the water, to nutrients in the water — like phosphorus — that the algae needs to grow.

"So we're trying to analyze for the kinds of things that would tell us, okay, what are all these different pieces to the puzzle?" explained Matt Hudson, a water scientist and associate director of the Mary Griggs Burke Center for Freshwater Innovation at Northland College.

“Our goal is to be able to tell the story of how a bloom evolves in Lake Superior, what drives it?” said Hudson. “And then ultimately, what can we do about it?”

That last question is especially important. While climate change appears to play a significant role in the growth of algal blooms on Lake Superior, that’s a global problem that requires a global solution.

Scientists like Hudson are interested in identifying steps that local and regional natural resource officials may be able to take to limit blooms in the lake.

To that end, researchers this summer are studying not just water in the lake itself, but also in the streams that feed into Lake Superior.

One of those tributaries is Fish Creek, which empties into Chequamegon Bay just west of Ashland, where blue herons soar out of the tall grass as the boat glides past.

Researchers at UMD’s Large Lakes Observatory have found that these rivers might be doing more than providing nutrients like phosphorus to the lake during big rainstorms.

They believe that these rivers also carry the tiny algal cells, called propagules, into the lake, that are needed to get bigger algae blooms started.

If scientists can pinpoint exactly where that’s happening, said Sterner, then maybe land managers can do things like erosion control to limit the amount of material that flows into the lake — and maybe, stop blooms from growing.

"So what we're trying to do is get a much better handle on where are those control points?” Sterner said. “Where are those units on the landscape, if they exist, that may be more important than others, so that we can focus our conservation efforts where they'll do the most good."

Lake Superior holds an astonishing ten percent of the entire planet's freshwater. It's known worldwide for its purity.

The deep concern, Sterner said, is whether this is the start of something much more extensive and recurring, and what impact that could have on the lake’s global reputation.

“Even though we're still talking about a minor part of the volume of the lake, if people get in their heads that this is a place that sometimes turns really green, that’s a real pivot from the mental space that people normally have about Lake Superior.”

To see the original report and read related articles, follow this link to the MPR News website.  https://www.mprnews.org/story/2021/07/26/scientists-look-for-clues-to-lake-superior-algae-blooms