Two zebra mussels are seen attached to a native mussel in the Mississippi River in August 2015. The number of lakes and rivers infested with the invasive mollusks has been rising. Photo: Courtney Perry for MPR News 2015

The state Department of Natural Resources confirmed last week that the invasive shellfish are in Locke Lake in Wright County; Clitherall Lake in Otter Tail County; Eagle and Turtle lakes in Becker County; Cedar Lake in Aitkin County; and the St. James Mine Pit in St. Louis County.

"They're kind of our best eyes and ears out there,” she said. “They're out enjoying the water, and they cover more places than DNR staff are able to."

Zebra mussels are small mollusks, with a striped brown-and-tan, D-shaped shell. They usually cling to hard surfaces underwater, such as docks, trash, rocks or other shellfish.

“Unlike our native mussels, which kind of burrow into the sand, zebra mussels attach onto really just about anything that's in the water,” said Megan Weber, an educator with the University of Minnesota Extension and the Minnesota Aquatic Invasive Species Research Center. 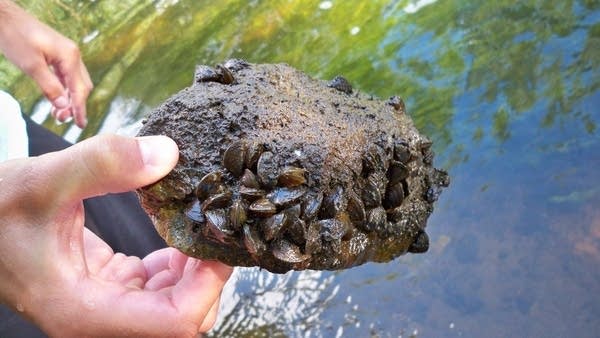 In some of the recent detections, children or adults swimming in the lake discovered zebra mussels attached to native mussels. Invasive species specialists then found other adult zebra mussels in the lake, indicating that the population is reproducing.

Water samples taken from the St. James Mine Pit near Aurora contained hundreds of microscopic zebra mussel veligers, or larvae.

About 3 percent of Minnesota lakes are infested with zebra mussels, although that number has been growing. They can compete with native species for food and habitat, change the ecology of the lake, cut swimmers’ feet and cause damage to water intake pipes.

Early detection offers the best chance of managing zebra mussels and other invasive species — and preventing them from spreading to other lakes, Weber said.

“Depending on how widespread the population is, there may or may not be an opportunity for some kind of management or treatment for zebra mussels, if you find them early,” she said.

If people see something unusual in a lake, they should take a photo and report it by contacting the DNR or using the app EDDMapS, Weber said.

The DNR advises boaters to help prevent the spread of aquatic invasive species by cleaning and draining their boats, trailers and equipment, and disposing of unwanted bait in the trash.

To see the original report and read related articles, follow this link to the MPR News website.  https://www.mprnews.org/story/2021/07/25/swimmers-discover-zebra-mussels-have-invaded-more-minn-lake...