A fire burns at a grain elevator in Clinton, Minn., on Sunday.  Photo: Image courtesy of Janine Teske

Firefighters from more than a half-dozen western Minnesota communities battled a grain elevator fire Sunday in Clinton, Minn. The fire forced some nearby residents to evacuate their homes.

Crews remained at the scene into the evening hours. KARE-TV reported it appeared the central part of the elevator structure had collapsed. 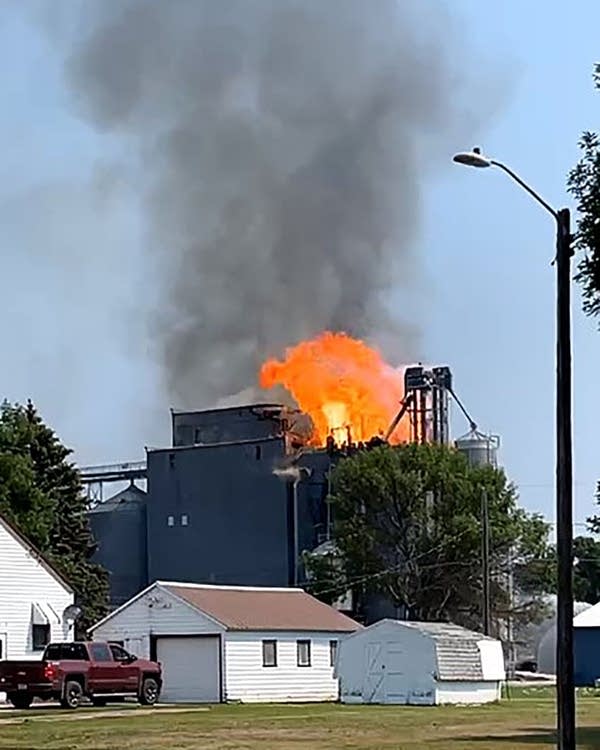 Clinton is located in Big Stone County on the western edge of the state.

City Council member Rich Stattelman told MPR News on Sunday afternoon that about 75 people had been evacuated from homes within three blocks of the grain elevator.

He said residents were also asked to minimize water use. Crews had been battling the flames since mid-morning.

"The tower can't keep up, so they're sending tankers out to different areas" to get more water, he said. "There must be four or five tankers, making trips back and forth now."

There were no immediate reports of injuries.

Stattelman said it appeared the elevator would "be a total loss, the main part, where they dump the trucks."

Stattelman said the grain elevator is a major economic force in the town of about 400 people.

"If they don't rebuild their elevator — why, it'll hurt the town," he said.

City and county officials were asking people to stay away from the community as firefighters work to douse the fire. Roads in the area are closed, including U.S. Highway 75.

At 4:30 p.m. Sunday, the Minnesota Department of Transportation reported that it expected Highway 75 "to remain closed into the evening and overnight" as fire crews continue to battle the fire.

To see the original report and related stories, follow this link to the MPR News.  https://www.mprnews.org/story/2021/07/25/firefighters-battling-large-grain-elevator-fire-in-western-...