Low water makes it harder to play on Minnesota lakes This gage monitoring the water level of Walker Lake in Otter Tail County, Minn., indicates how far the water has dropped since this spring. Photo: Courtesy of Chris LeClair

Roger Anderson lives on the water but he says he can’t jump in his boat right now and chase walleye on Otter Tail Lake.

“That's extremely low. I can't get my fishing boat off my lift. It's still sitting on my lift.”

Anderson has moved his pontoon boat about 30 feet off shore where there’s just enough water for it to float.

Otter Tail Lake, with more than 20 square miles of water, is one of the most popular in Otter Tail County. It’s also nearly 1.5 feet below the normal water level. The west-central Minnesota county has more than 1,000 lakes, the most of any county in the state.

Many residents are moving boat lifts farther away from shore to find deep enough water.

"I encouraged people to put flashing lights on their boats or their pontoons if they move them out quite a ways away from shore so that people don't run into them at night,” he said.

"Boaters are frustrated with low lake levels at water accesses and some of them are deciding not to go on, and we actually have some data that suggests that that is the case,” said Otter Tail County land and resource management director Chris LeClair.

"Just looking at July of 2021, compared to July of 2020, we have seen a decrease of just over 2,100 inspections, which is about a one-third drop from July of last year,” said LeClair.

LeClair believes the reason inspections are down is that people are choosing to not boat or fish on lakes where water levels are low.

Lake levels aren’t universally low in Minnesota. In fact, Otter Tail County has a few lakes where residents are battling high water that’s flooded the shoreline. Those are typically lakes with no natural outlet, swollen by heavy precipitation in the past few years.

The Minnesota Department of Natural Resources has water level gages on about 900 lakes across the state, monitored by volunteers. That means there is often a lag in collecting the data, unlike the real-time data available from stream gages across the state. The lake gages measure water levels based on what's called the ordinary high water level.

LeClair has one of those gages on his dock.

"This past weekend, Walker Lake is officially a foot below ordinary high,” he said. “Now last year at this time, the lake was a foot and a half over ordinary high, so it's 2 1/2 feet lower than it was a year ago."

That means LeClair can't take his boat to nearby Otter Tail Lake because there's not enough water in the connecting channel.

The DNR collected water level data on about 150 lakes in June, according to Water Monitoring and Surveys Unit supervisor Joy Loughry.

“Fifty-two percent of them statewide are still at a normal percentile, about 40 percent are below normal and 8 percent are above normal,” she said. 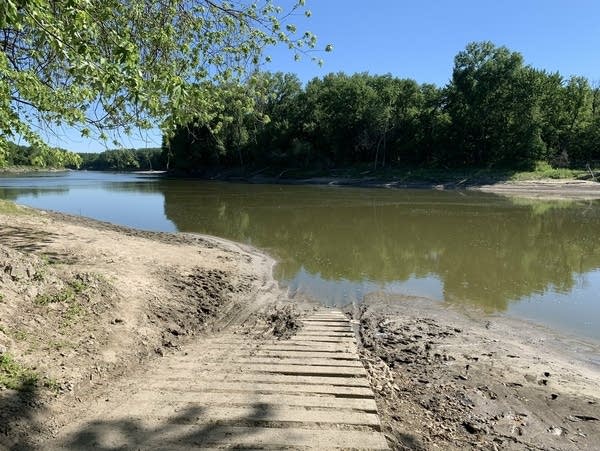 Low water on some Minnesota lakes and rivers this summer is making launching watercraft more of a challenge than usual. Here, the Minnesota River in Henderson was running so low on June 15 that this boat launch appeared nearly unusable without risk of getting stuck in the mud.  Photo: Andrew Krueger | MPR News file

In east-central Minnesota, Crow Wing County has about 400 lakes, many that are heavily used by summer visitors.

"We're seeing Crow Wing County lakes, on average are below that ordinary high water level, anywhere from a half a foot to even up to 2 feet," said DNR hydrologist Dani McNeil.

McNeil said the primary effect of low water is on boaters losing access to lakes, or increased risk of running into obstructions just below the surface.

Another effect: Low water combined with hot days can cause oxygen levels to drop, causing fish kills. Low water can also lead to an increase in algae blooms.

"We get a fair number of calls about low water levels,” said McNeil. “And this year in particular, it's so different than what we've experienced over the last decade, that I think it's even more concerning for folks."

Back on Otter Tail Lake, Roger Anderson says water levels are lower now than they typically are in late August or September, when lakes are usually at their lowest level of the year.

"I'm guessing that if we don't get any rain soon, we're going to be taking all of our boats out probably by the middle part of August for sure," he said.

It will take several inches of rain to reverse the declining water levels in many Minnesota lakes.

To see the original story and read related reports, follow this link to the MPR News website.  https://www.mprnews.org/story/2021/07/22/low-water-makes-it-harder-to-play-on-minnesota-lakes