The unique aspect of starry stonewort is the star-shaped bulbs along its stems.  Photo: Paul Middlestaedt for MPR News

Starry stonewort, a fast-spreading invasive algae, has been found in Leech Lake, a popular recreational destination about 60 miles north of Brainerd in Cass County.

A company removing aquatic plants contacted the Minnesota Department of Natural Resources when its staff suspected they found the invasive algae near the Anderson’s Cove resort in Steamboat Bay.

A DNR invasive species specialist confirmed starry stonewort was present throughout the marina, around and under docks and boats.

Leech is the 18th Minnesota lake confirmed to have the invasive algae. It's also in nearby Cass and Winnibigoshish lakes.

“It is a very popular lake — very important to the surrounding area culturally — historically a very important lake,” she said. “To find any new infestation of an aquatic invasive species is really sad.”

Starry stonewort was first detected in Minnesota in 2015 in Lake Koronis near Paynesville. The grasslike algae can form dense mats that compete with native plants and interfere with boating and swimming. It’s known for its unique star-shaped bulbs along its stems. 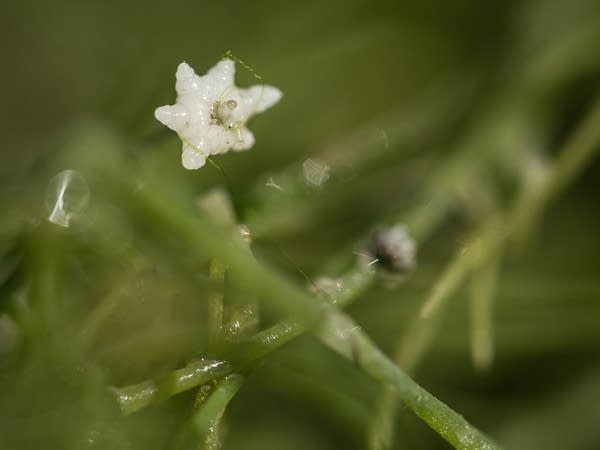 The invasive algae reproduces through the help of little white bulbils, 3-5mm in size, which are the primary identifying markers of this species. Starry stonewort was most likely introduced to North America with the ballast water of big vessels on the Great Lakes. It is native to Europe and parts of Asia. While considered an endangered species in Europe, this algae’s aggressive growth in American lakes could have long-term effects on their ecology and consequently on fishery.   Photo: Monika Lawrence for MPR News

A native of Europe and Asia, the invasive algae was unintentionally introduced to the United States through the ballast water on cargo ships on the Great Lakes.

Starry stonewort has never been eradicated from a Minnesota lake. The DNR is discussing management options with the Leech Lake Band of Ojibwe, the lake association, property owners and local governments.

Kovar said the DNR is discussing how to minimize the impacts of the invader, but she said there are not many effective treatment options available. Efforts to control it by using copper-based algaecides, hand-pulling or mechanical removal have had mixed results, she said.

“We're concerned, and we're pretty uncertain about the consequences for the lake, but we're sure that it's not going to be good,” said Bill Schultz, a Leech Lake Association board member who’s been a summer resident on the lake for 15 years.

Along with general ecological impacts, Schultz said he and others are worried about the aquatic invader clogging up the lake’s numerous public and private harbors, making boat traffic difficult.

“It’s had a pretty negative effect on a number of lakes in Minnesota, and I suspect it will be the same with Leech Lake,” he said. “But unfortunately, there’s nothing we can do about it either at this point, because there’s no solution to the problem.”

Leech Lake does have inspectors checking boats for aquatic invasive species at public access points, Schultz said. But the lake has dozens of launch points, along with private resorts that aren’t inspected, he said.

“It's an overwhelming problem for a lake as large as Leech Lake, to try and police it properly,” he said.

The 112,000-acre Leech Lake also has been infested with zebra mussels since 2016. Kovar said proximity — how close a lake is to other lakes infested with aquatic invasive species — plays a major role in the likelihood that it will become infested as well.

Kovar urges boaters and anglers to help prevent the spread of aquatic invasive species by cleaning and draining all water from boats and other watercraft and disposing of unwanted bait in the trash.

When moving to another lake or river — especially after leaving infested waters — the DNR recommends spraying boats with high-pressure water, rinsing with very hot water for at least 10 seconds and drying the boat for at least five days. There are decontamination stations located around Cass and Hubbard counties, Kovar said.

“Now that we have a few (infested lakes), it's so important to make sure that you clean (your boat) before going to another lake,” she said. “And then, encourage everyone you know to do it too — because that's how we change behavior.”

To see the original report and read related stories, follow this link to the MPR News website.  https://www.mprnews.org/story/2021/07/19/invasive-starry-stonewort-found-in-leech-lake