Rangers worked through the weekend to reach campers spread across a vast swath of the Boundary Waters Canoe Area Wilderness that's now closed to visitors amid a growing threat from wildfires.

Added to a previous closure in place along the international border, the closure area now stretches east nearly to Basswood Lake, west nearly to Crane Lake, and south to the Echo Trail.

The area is being cleared of canoeists and hikers as a precaution as wildfires continue to burn unchecked just north of the border, in Ontario's Quetico Provincial Park. The fires were active over the weekend and the ongoing drought is making fire conditions more volatile — adding to the risk the Quetico fires may cross into the BWCA.

"There's been an effort to evacuate people who are already up in those areas," said Bob Reif, a public information officer with the Minnesota Incident Command System that's monitoring the fires. "Travel time to those areas, if you're paddling — we're talking about days, not hours. So, it's important to move them."

Cecile Stelter, a public information officer for the team managing the U.S. fire response, said they've been keeping in close contact with their Canadian counterparts. But Stelter says there are limits to how many resources Ontario can devote to the Quetico fires.

"They have a lot of fires, larger fires that are threatening life and property to the north. So, they are welcoming the assistance and the planning that the team is doing," she said.

As of Sunday evening, data from Ontario officials showed the three fires in Quetico that are closest to the border, combined, had burned more than 4,000 acres.

U.S. officials have been conducting daily flights to monitor the Quetico fires. And in addition to efforts to contact campers in the closure zone on Saturday and Sunday, teams of Forest Service and firefighting personnel traveled to the international border for on-the-ground planning in case the fires do spread. The Mudro No. 22 and No. 23 entry points already had been under a closure order, along with Iron and Crooked lakes along the Canadian border north of Ely, as well as some smaller lakes north of Gun Lake.

The closure order will last at least a week, or until the fire danger has subsided.

“The Forest will be canceling quota permit reservations for the entry points listed. Those with reservations will be contacted, reimbursed and redirected to other areas of the Forest that do not require BWCAW quota permits,” a Superior National Forest news release stated. Rangers were out in the closure area on Saturday to contact canoeists and hikers. 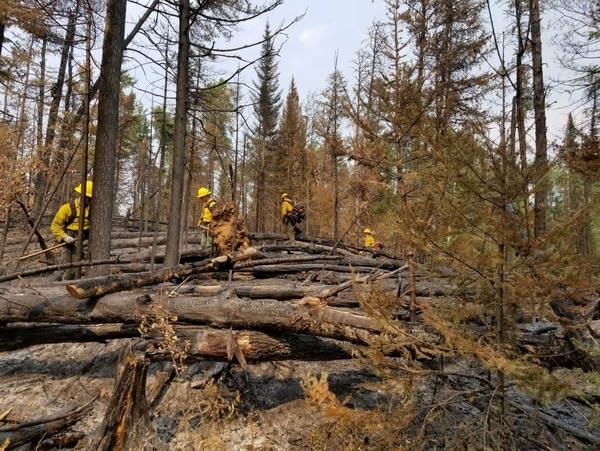 The Delta Lake fire east of Ely was estimated at 62 acres Sunday — down slightly thanks to better mapping. Containment remained at 10 percent as more than 200 firefighters work to douse the flames.

The Delta Lake fire is burning in a blowdown area, with downed timber stacked waist- to chest-high in places. Aircraft have been dropping water to assist crews on the ground.

The fire is completely surrounded by hose line, but Superior National Forest officials noted in a Facebook post on Sundaythat hose line "by itself does not equal containment. A section of line is contained if there are no more hotspots or heat near the fireline and no chance the fire will reignite and grow past the constructed line. Crews monitor these areas for days, even weeks."

A temporary BWCA closure order remains in place near the Delta Lake fire, which is burning just outside the wilderness boundary.

Because of ongoing drought conditions and increased fire danger, a temporary ban on most campfires in the Superior National Forest also remains in place. The ban includes all campfires in the BWCA. Elsewhere in the forest, campfires are allowed only in Forest Service-installed fire structures in developed, fee campgrounds.

To see the original report and related stories, follow this link to the MPR News website.  https://www.mprnews.org/story/2021/07/18/rangers-clear-bwca-closure-zone-as-officials-keep-eye-on-qu...