It's Christmas in July for the Dakota skipper, a yellow-beige butterfly that crawls up bunchgrass this time of year and flutters about the coneflowers blooming across the rolling plains.

While it slurps up nectar, surveyors working with energy companies and conservation groups scour the hills — carefully — to document the skipper, which is considered threatened under the Endangered Species Act.

One of those surveyors is Luke Toso, who in early July can often be found among "a bunch of guys with hats and cameras stumbling around the prairie looking for butterflies," as he described it one recent morning before heading out into the field.

The Dakota skipper can be seen flying about the prairie for just two to three weeks in the early summer, during which time it mates and the females lay eggs before they die, The Bismarck Tribune reported.

"It's a very limited amount of time to get to know this species," Toso said.

Research and recovery efforts for the butterfly are gaining momentum in North Dakota — the primary place the species calls home. Its range once extended as far east as Iowa and Illinois, but the butterfly can no longer be found there. Habitat loss has depleted the species' population over the past few decades, limiting it to the prairies of North Dakota and select parts of neighboring states and Canadian provinces.

"It's only on very pristine, native prairie," said Elisha Mueller, a conservation biologist with North Dakota Game and Fish. "It needs a very specific ingredient list."

Government officials and conservationists who work in the states and provinces where the skipper lives formed a recovery council last year to better coordinate their efforts.

"We feel we need to understand more about where skippers are and where they aren't before we can get too engaged in a reintroduction project," said Eric Rosenquist, conservation program coordinator for the North Dakota Natural Resources Trust, a group that partners with companies, organizations and governmental agencies on habitat and wildlife projects.

Early efforts to survey skipper populations took place in the 1990s, at which point the species already appeared to be in decline. The butterfly is thought to cover a wide swath of North Dakota. Its population is particularly high in McKenzie County, which is also the core of the Bakken where oil and gas development further threatens its habitat. 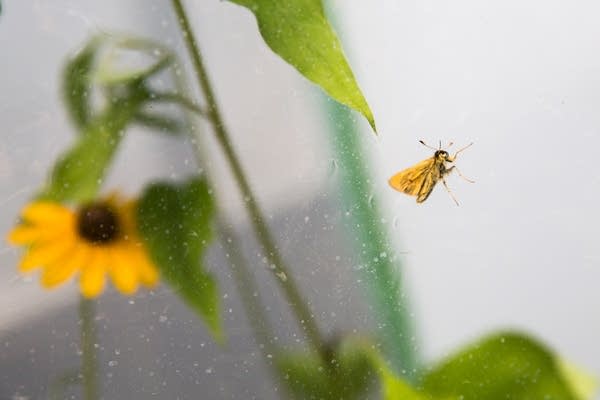 A male Dakota Skipper rests on the wall of his mesh enclosure at the Minnesota Zoo on July 1, 2016.  Photo: Evan Frost | MPR News 2016

The conservation work funded by the Natural Resources Trust is paid for through a variety of government and private sources, including energy companies looking to offset the impact of their projects. One goal of conservationists is to ramp up survey work in places such as eastern North Dakota outside of the skipper's known hot spots.

"We're hoping to find new populations of skippers and add to the scientific knowledge that's out there," Rosenquist said.

The trust is working with surveyors such as Toso, who is a senior environmental scientist with the Bismarck-based company Beaver Creek Environmental. The telephoto lens on his camera allows him to document the skipper without hurting it by wading into its habitat, and to verify it's the right species. North Dakota is home to a number of types of skippers, many of which are a similar color yet distinguishable by other markings.

"The skipper is like an F-16," Toso said, referring to the fighter jet. "It is shaped in a way that makes it go extremely fast. It's hard to get an estimate of how many there are in a landscape."

On his best day in the field, he and his colleagues have documented 200 of the butterflies at a single site. But, he said, he "couldn't even hazard a guess" as to how many total exist in the Northern Plains.

Surveyors such as Toso also look for Dakota skippers when energy companies hire them. For example, an oil company might want to put a well pad on U.S. Forest Service land and need federal permits to do so. That will trigger a review of the site for critters like the skipper listed under the Endangered Species Act.

If the butterfly is present, the company might move its well pad to a less-intrusive spot. If that's not feasible, the developer could opt for capturing the skippers there and releasing them elsewhere. Often, the company ends up offering money to offset its project's impact, Toso said. Those funds might make their way to an entity such as the Natural Resources Trust, which would use them for conservation work.

The U.S. Fish and Wildlife Service plays a role in the process. Oil companies need to consider things like dust control at their project sites so as not to unnecessarily send up clouds up dirt that cover the flowers that make up the skipper's habitat, said Drew Becker, North Dakota ecological services supervisor for the federal agency.

"I would consider the oil industry a real partner in skipper recovery," he said. "They've been very helpful trying to provide offset funding to really be proactive to figure out where skippers are, how we can avoid them and how we can try to recover them by protecting some big blocks of habitat so that we can do both — so we can recover skippers and we can also extract oil."

Scientists are still trying to pinpoint how to best help the butterfly. At top of mind is whether they can they plant the right combination of grasses and flowers to attract the skipper to sites that are not native prairie.

"Those are tough questions we just don't have answers to yet," Mueller said.

Last year, a team found the skipper flying across crested wheatgrass, which is not native prairie.

"That's encouraging because it's an indication that maybe there is a possibility of doing habitat restoration," Toso said. 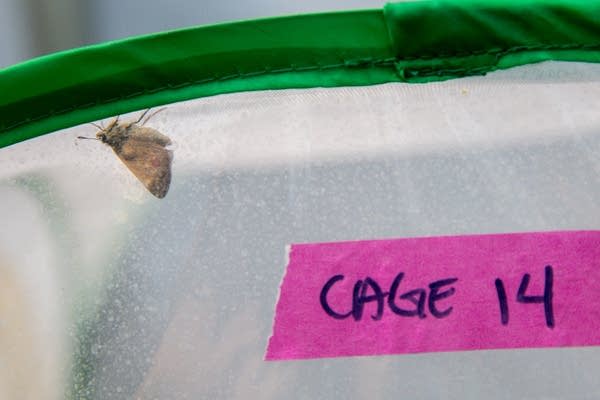 A female Dakota Skipper with a marked wing rests on the edge of her enclosure at the Minnesota Zoo on July 16, 2016.  Photo: Evan Frost | MPR News

Skippers have been documented in native prairie around the Upper Souris National Wildlife Refuge next to cultivated fields. The Natural Resources Trust is involved in efforts to plant a mix of grasses and flowers in the area to see if it can recreate a habitat that will support the skipper.

"We're just getting started getting seed in the ground," Rosenquist said. "It's going to be a few years before we have much indication of what works."

One other recent project involved a partnership with the Minnesota Zoo, which collected Dakota skippers from a proposed oil and gas site in 2019. The skippers laid their eggs in captivity, and the butterflies were released back into the wild in western North Dakota. Work will take place this summer to evaluate the success of that effort, Rosenquist said.

The Dakota skipper is one of several pollinators in North Dakota listed as threatened or endangered. Unlike some of them, it can be tough to drum up excitement around the species because its looks do it few favors.

Even Becker, one of the skipper's biggest cheerleaders, admits it can appear "a little drab."

"It's easy to get some momentum behind a ferret because they're cute and they're fuzzy," he said. "Monarchs are so showy, and they're in grandma's backyard. Skippers? Not so much."

But Dakota skippers are important, nevertheless, because their presence is indicative of the health of a habitat that supports other important species, he said.

"The Dakota skipper on its own may not be really impressive to everybody," he said. "But it represents something bigger than the bug itself."

To read the original report and more environmental reporting, follow this link to the MPR News website.  https://www.mprnews.org/story/2021/07/12/endangered-butterfly-gaining-momentum-in-north-dakota