Dry conditions might mean a good year for wild rice Drought has worried growers in parts of Minnesota, but a drought can be a good thing for wild rice.

Growing in more than 2,000 Minnesota lakes and rivers, wild rice is showing stress from dry conditions. But for now, observers say the outlook is positive.

"It is a little bit counterintuitive perhaps, with this being an aquatic plant, but I think in most cases, years that have slightly below average precipitation tend to produce the greatest rice abundance," said Peter David, a wildlife biologist with the Great Lakes Indian Fish and Wildlife Commission, a resource manager for eleven Ojibwe tribes in Minnesota, Wisconsin and Michigan.

Wild rice prefers water between one and three feet deep with a mucky bottom, said Darren Vogt, resource management director for the 1854 Treaty Authority which manages the off-reservation hunting, fishing and gathering rights of the Bois Forte and Grand Portage Ojibwe bands in northeast Minnesota.

“If you get high spring water levels or beaver issues [blocking water flow] or major storms, you raise the water above those optimal levels and you'll get a poor wild rice year, so that's why generally drier years or lower water on a lake favors wild rice,” said Vogt. 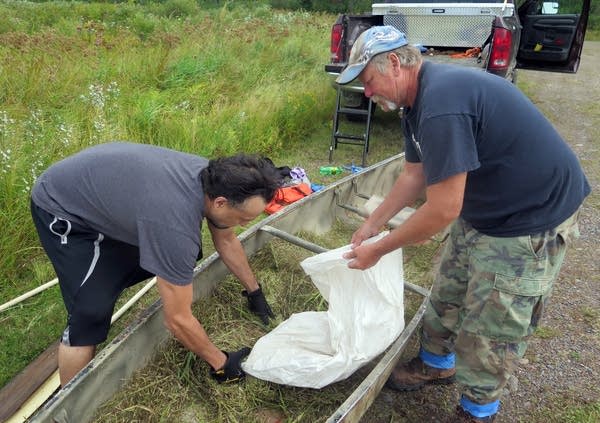 "Rice beds are looking good through much of the range, but in the shallower areas where the water is drying up, I've seen some plants that are turning brown or yellow because there's not enough standing water for them," Geisen said.

The areas with stressed plants are relatively small, said Geisen, and could expand if water levels continue to fall over the summer. Wild rice is generally mature and ready for harvest by late August.

While dry conditions are good for the rice plants, harvesters might face challenges gathering the crop — a process that involves gently shaking the grain into a canoe.

"If we don't get more water, and lake and river levels don't rise, access will likely be an issue come harvesting season," Geisen.

She recounted a recent conversation with a wild rice harvester about access to a lake where low water has left a long mud flat between the shore and open water.

The harvester decided that if conditions don’t improve, he’ll look elsewhere for rice.

And conditions could change significantly between now and when rice is ripe in late August, said Geisen. Water levels could fall further or rise, and wind storms or hail could damage rice plants. She's urging harvesters to scout wild rice lakes often over the next few weeks.

The Minnesota DNR typically sells 1,000 to 1,500 licenses to collect wild rice, and the fees are used for wild rice management.

Tribal members are not required to have a state license.

In addition to being a traditional healthy food source, wild rice is culturally significant for Ojibwe Tribes, holding a prominent place for centuries in the migration story for Anishinaabe people.

But some experts are concerned about its long-term future.

While this year's crop is looking good, there are troubling trends developing, said Peter David. Early in his career he learned the four-year rule from tribal elders.

"In a four-year period, you could expect one really good crop and maybe a couple of sort of average crops and one year that's pretty close to failure. And what we're seeing now is failure rates occurring at a higher rate. And that's a big concern.”

While he said it is difficult to attribute the trends to a changing climate, there are negative changes that align with a warmer, wetter climate. Fungal disease is appearing more often in wild rice, and a warmer climate increases the competition from other plants better suited to those conditions.

"And so I've got a great deal of concern about the long-term future of rice, particularly in this part of the world where, you know, we're on the southern edge of the range for northern wild rice that's most important to human harvesters," said David.

“All of the trends that we're seeing are consistent with what you would expect to see from climate impacts. And there's really no logical reason to think that this plant isn't being appreciably affected.”

To hear an audio version of this story and see related reports, follow this link to the MPR News website. https://www.mprnews.org/story/2021/07/08/dry-conditions-might-mean-a-good-year-for-wild-rice