A male elk stands in a field. The Fond du Lac Band of Lake Superior Chippewa has submitted a formal proposal to the Minnesota Department of Natural Resources to move up to 150 elk from the northwestern corner of the state beginning in 2025.  Photo: Courtesy of Mike Schrage, Fond du lac Resource Management

The Fond du Lac Band of Lake Superior Chippewa has submitted a formal plan to state wildlife officials to reintroduce elk to a broad swath of forest in northeastern Minnesota.

In a proposal submitted to the Minnesota Department of Natural Resources last week, the band suggests ultimately moving 100 to 150 elk from existing herds in the northwestern corner of the state to an area including much of the Fond du Lac reservation, as well as the Fond du Lac State Forest, in Carlton and southern St. Louis counties. 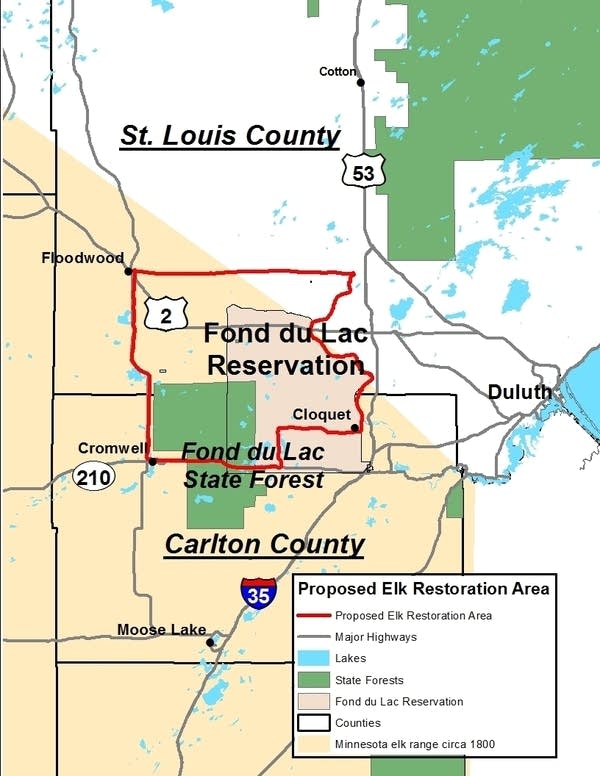 The plan follows several years of study led by the University of Minnesota, which found ample food and habitat for a small elk herd in the region. Researchers also documented widespread public support for reintroducing the species, which once roamed in the thousands across the state, but now numbers three small herds consisting of around 130 animals in northwestern Minnesota.

“We have sufficient habitat for elk that roughly could support one elk per square mile, which is similar to elk herds In Michigan and Wisconsin,” said Mike Schrage, the band’s wildlife biologist. “And we had good levels of public support [for the idea], both from local residents and local landowners.”

Elk are known as “omashkooz” by the Ojibwe, and were important to their diet and culture, before being wiped out by hunting and settlement in the early 1900s.

The Fond du Lac Band is interested in providing future hunting opportunities for tribal and non-tribal members, restoring a game species that’s likely to adapt well to a changing climate, and ensuring that band members have an abundant supply of traditional food in an area where they retain treaty rights to hunt, fish and gather.

“Elk have historically been, and continue to be, an intrinsic part of our culture and traditions,” said Fond du Lac Tribal Chair Kevin DuPuis Sr.

The band is proposing to move elk from a predominantly agricultural part of Minnesota over a period of three to five years, beginning in 2025, to a more forested landscape of state, county and tribal land, where Schrage predicts fewer conflicts between elk and people.

Still, he said, the Minnesota DNR and Fond du Lac Band would need to have elk management plans in place to help address inevitable issues that arise between people and wild animals.

Schrage would like to see planning with the DNR and other agencies begin this year. He anticipates that people would have ample time to make their opinions heard before any formal plan to expand the elk’s range in Minnesota is approved. But he said the final decision lies with the DNR, which hasn’t yet responded to the proposal.

“The DNR is going to be responsible for managing them. So in order for this proposal to work, it's going to take support and cooperation from the Minnesota DNR in a big way,” he said.

To read the original report and see related articles, follow this link to the MPR News website. https://www.mprnews.org/story/2021/07/07/tribe-proposes-restoring-elk-to-northeastern-minnesota