Ticks suck. Here's a guide to identifying them and avoiding bites Minnesota Department of Health employees demo a smart hack for keeping critters off while out in the field: Wrap duct tape around socks and pant legs to prevent ticks from crawling in.  Photo: Sheila Eldred for NPR

Ticks aren't known as beach-lovers, so ecologist Dan Salkeld and a colleague were surprised when they found 180 ticks in less than a mile on a coastal trail near Muir Beach in California one day in 2016.

"Contrary to most people, we were delighted at the high numbers of ticks! It was exciting in terms of sample sizes and data," says Salkeld, whose findings were published in June.

But it's also sobering. For years, people who track black-legged ticks — the kind that carry Lyme disease — have been finding them in further flung territory, though still in mostly traditional habitats of forested areas with tall grasses and leaf litter.

Now, "as the numbers expand, we see ticks in areas that we don't think of as traditional habitat," Pritt says.

That trend has continued, with ticks showing up in places previously deemed safe from the disease-carrying arachnids, from those coastal California beach areas to manicured lawns in the Northeast. The sheer number of ticks may be forcing them to branch out into new habitats, Mayo Clinic parasitologist Bobbi Pritt theorizes.

And, more of them appear to be carrying pathogens. Pritt's lab tests tens of thousands of ticks; over the last three years, they've found that more and more of the ticks carry the bacteria that causes anaplasmosis, a disease that can cause headache, fever and chills and severe illness if treatment is delayed.

It all adds up to more illness: tick-borne diseases are at an all-time high, with about 50,000 cases reported each year — and far more going unreported.

While Lyme disease is by far the most prevalent, accounting for nearly 35,000 cases in 2019, ticks also carry pathogens that can make you allergic to red meat or cause acute respiratory distress. In rare cases, tick-borne diseases are fatal. Anaplasmosis is the second-most common tick-borne disease, with nearly 8,000 cases reported in 2019.

Here's what you need to know about what kinds of ticks to watch out for, where — and what to do if you get bitten.

Your personal disease risk is highly dependent on your location.

"Every year they say it's going to be a big year — either because of acorns or cold winters or warm winters," he says, but all of those factors vary from one location to the next.

Currently, a mild winter plus a hot, humid summer in the Midwest is bringing out ticks earlier than usual, for example. "It's prime time — ticks are already out and about in Minnesota," says Elizabeth Schiffman, epidemiologist supervisor at the Minnesota Department of Health.

Regional differences are shifting as well. In East Hampton, N.Y., Dempsey is seeing more Lone Star ticks, a relative newcomer to the area, and fewer black-legged ticks — resulting in less Lyme disease. And back on that Muir Beach trail in California, Salkeld's team got its second surprise when they tested the ticks they found.

"Our prediction would have been that they didn't have Lyme, but they were just as high as ticks in woodland areas," he says, leading him to pose the question in his study: Should infection prevalence in ticks be reported at a hyper-local level — possibly even for a single trail?

What does it mean for those of us trying to stay away from ticks? Be familiar with the ticks in your area, Pritt says. (Try this field map from the University of Rhode Island's TickEncounterwebsite.) And note that your state or county health department is your best bet for local tick information. 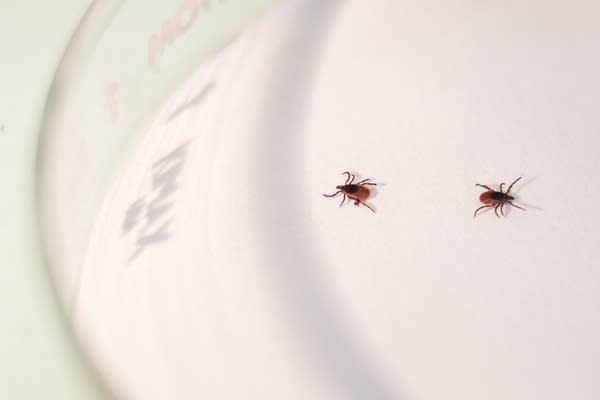 Two deer, or black-legged, ticks crawl around in a glass petri dish in the insect microbiology lab on the University of Minnesota's St. Paul campus in 2018.
Lacey Young | MPR News 2018

These are the main types you may encounter in the U.S.

The Lone Star tick is aggressive; instead of "questing" from a blade of grass like a black-legged tick, it may pursue a person 50-75 feet away. "People could be hanging out on their deck and they'll crawl up on them," Dempsey says.

They can carry ehrlichiosis, heartland virus, tularemia and Southern tick-associated rash illness. Their bite may also trigger alpha-gal syndrome, which can cause an allergy to meat. Adult females have a white dot on their backs.

Its range includes a large swath of the country from Iowa to Texas and everywhere east of there.

The Gulf Coast tick is a close relation.

The American dog tick, also known as a wood tick, can carry Rocky Mountain Spotted Fever, one of the deadliest tick-borne diseases, and tularemia. This tick is much bigger than a black-legged tick, so people are more likely to spot them when they latch on. It's found in the eastern two-thirds of the country and California.

The Asian long-horned tick is new species that landed in the U.S. in 2017, when it was spotted for the first time on a sheep in New Jersey. It's now been noted in at least 15 states in the Midwest and East coast. Female ticks do not need to mate to lay eggs, and thousands can be found together, making grassy areas appear to be moving. They have not yet been found to transmit disease in the U.S.

How to avoid getting bitten

To avoid a tick encounter, you'll want to be vigilant about taking precautions whenever you're spending a significant amount of time outdoors in tick territory, whether you're hiking or mowing your lawn. Fortunately, the same prevention techniques work for all types of ticks, Pritt says:

1) Get dorky: Repelling ticks starts with your outfit. Choose long sleeves and pants if possible. "And it may feel dorky, but tucking your pants into your socks gives ticks less access into the areas they can bite," says Pritt, who wears white coveralls and duct-tapes the legs to her socks when going on tick drags. Spray exposed skin with a good repellent. And treat clothes likely to be worn in tick habitat ahead of time with a permethrin repellent for the greatest protection.

2) Strip: After your adventure — even if it's just mowing the lawn — the easiest way to make sure ticks stay outside is to disrobe as soon as possible — shed all your clothes on a porch before going inside to keep any hangers-on outside if possible — jump in the shower, check for ticks and scrub. Remember that disease-carrying ticks can be tiny: at the nymph stage, when it's likely to bite you, a black-legged tick is the size of a poppy seed. Don't forget about pets and kids. Check them for ticks outside; otherwise, a tick can fall off a dog inside and bite you.

3) Disinfect: Throw discarded clothes into the dryer on high heat for at least six minutes to kill any stragglers.

What to do if you do get bitten

1) Don't panic. It's a hard rule to follow, Pritt admits, but remember that not every tick carries a harmful bacteria or virus.

2) Forget the folk remedies: "Grab a pair of fine tipped tweezers, remove as quickly as possible as close to skin as you can by pulling it out in a smooth, continuous motion without twisting it," Pritt says. No, you don't need to light a match or roll it in butter, and in fact, those methods often result in only partial removal.

3) Save it: Put the tick in a plastic bag in the freezer, especially if you think it may have been attached a long time, which may increase the risk of Lyme disease transmission. That way if you decide to see a doctor, they'll be able to identify the type of tick that bit you, and even test it for disease-causing bacteria. Keep in mind, though, that you may not get infected even if the tick tests positive, Dempsey says.

4) Watch for symptoms: A rash, headache, flu-like symptoms and joint pain can all be signs of Lyme disease, anaplasmosis and ehrlichiosis. A stiff neck and swollen lymph nodes are associated with Lyme disease.

If you have symptoms

Many people with Lyme disease don't remember getting a rashor a tick bite. So mention your concerns to your health care provider. Blood tests may be able to detect Lyme disease after your body has developed antibodies.

To see the original report and read related stories, follow this link to the MPR News website.  https://www.mprnews.org/story/2021/07/04/npr-tick-bite-disease-safety-tips