Activists are walked through an Enbridge Line 3 pump station after being arrested near Park Rapids, Minn., on Monday. Photo: Evan Frost | MPR News

Hundreds of people blocked access to an Enbridge pipeline pumping station being built a few miles south of Itasca State Park during a day of protests Monday.

Some locked themselves to construction equipment on the Two Inlets pump station site or to a boat that protesters were using to block a road that leads to the station.

A total of 247 people were arrested, according to a release from the Northern Lights Task Force, a coalition of northern Minnesota law enforcement agencies created to address pipeline-related protests. The task force said 179 people were arrested and booked into area detention centers. An additional 68 people were cited and released.

The statement said most were charged with gross misdemeanor trespass on critical infrastructure, or public nuisance and unlawful assembly.

A few dozen protesters have continued to camp along the Mississippi River about 20 miles east of the pump station site. The location marks a spot where Line 3 is slated to cross the river, a few miles from the headwaters. 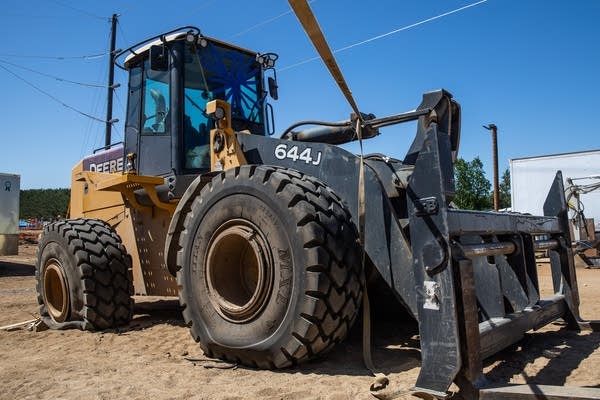 A forklift sits with flat tires after activists let air out of the tires inside of an Enbridge Line 3 pump station near Park Rapids, Minn., on Monday. Photo: Evan Frost | MPR News

Since Monday, the protesters, who call themselves water protectors, have erected tents along the pipeline’s path. The camp was erected as part of a multi-day, Indigenous-led protest against the Line 3 project called the Treaty People Gathering. The event included prayers, marches and direct action to protest the pipeline.

Dawn Goodwin, a member of the White Earth Nation and one of the organizers of the event, said the opponents plan to remain at the Mississippi site for at least four days, to complete a spiritual ceremony.

"It's a constant flow of people coming and going,” she said. “Our relatives from all over the country have come — all over the world.”

Clearwater County Sheriff Darin Halverson said law enforcement has no immediate plans to remove the protesters from the site.

Enbridge is replacing its current Line 3 oil pipeline, which is corroding and requires extensive maintenance, with a new pipe along a different route across northern Minnesota that would carry about twice as much oil as the current line.

Line 3 opponents argue that, in addition to exacerbating climate change and putting nearby waters at risk, the project threatens tribal members' rights to hunt, fish and gather wild rice on land outside reservation borders — as outlined in several treaties with the U.S. government. 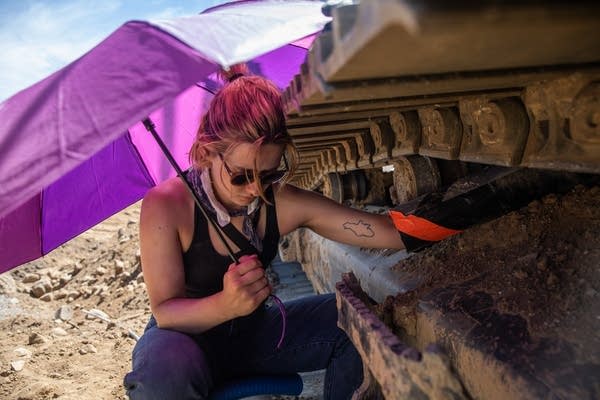 An activist uses an umbrella for shade as they sit locked to an excavator at an Enbridge Line 3 pump station near Park Rapids, Minn. on Monday. Photo: Evan Frost | MPR News

This summer marks a key moment for the groups fighting the project. Since Minnesota utility regulators first approved Line 3 in 2018, opponents have pledged stiff resistance. The new pipeline would transport nearly 800,000 barrels of Canadian oil across northern Minnesota every day.

Work on the project is more than half complete. Construction resumed on June 1 after a two-month pause during the spring thaw. The company expects 4,000 workers to be on the ground by mid-June, with the pipeline completed and in service by the end of the year.

As Enbridge ramps up construction, the fight to stop Line 3 continues on other fronts. A major decision is expected from the Minnesota Court of Appeals in the next two weeks that could stop work on the project.

To see the original story and read related reporting, follow this link to the MPR News website.  https://www.mprnews.org/story/2021/06/09/officials-more-than-200-arrested-in-northern-minnesota-line...