A boy dives over a railing into Lake Nokomis during a heat wave in Minneapolis on Tuesday.
Photo: Tim Evans for MPR News

Minnesota finally sees a break in the heat by the weekend, but not before the current hot spell sets more records. Meanwhile, rain chances stay limited for much of the state.

Minnesota was off to another warm and muggy start Wednesday, with most of the state starting the day in the 60s or 70s.

ew points are also elevated, and predominantly in the 60s, and that high moisture content in the air is making for the muggy morning and will keep the day sticky.

Our heat wave continues with highs for almost the entire state in the 90s. 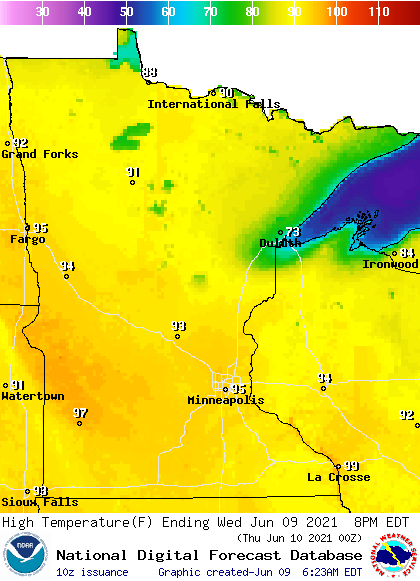 These temperatures could set record highs again in some spots. For example, the June 9 record for the Twin Cities is 95, which is also the expected high Wednesday.

Because of the heat and humidity, the Twin Cities and surrounding counties also continue to be under a heat advisory through Thursday evening. The one “cooler” spot is near Lake Superior, where thanks to the influence of the lake, there will be a few 70s.

Skies stay mostly sunny to party cloudy again, but a weak boundary of lower pressure is keeping occasional showers and storms in the forecast. During the afternoon especially, some spotty showers of storms could pop up. 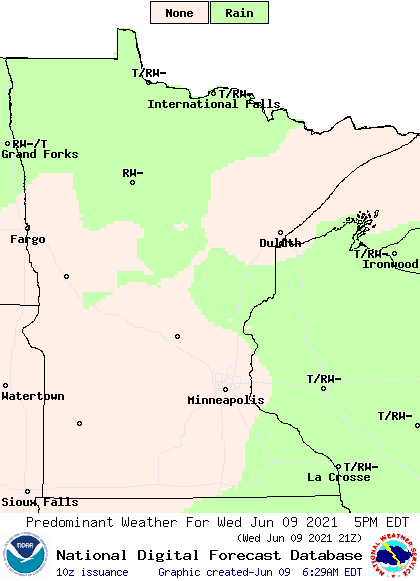 
The best chance for any activity remains in northern Minnesota, and northwest and north central Minnesota may see isolated severe storms, with high winds and large hail as the primary risks.

A record stretch of 90s

The rest of the week stays hot for early June, with most of the state the in 90s through at least Thursday, then 80s into the weekend.

By the time the 90s break, some parts of Minnesota will be in their top 10 longest stretches of 90s on record. This becomes even more impressive because the stretch comes so early in the season. Nineties are more likely in July and August).

Here is that current stretch for the Twin Cities, along with the forecast: 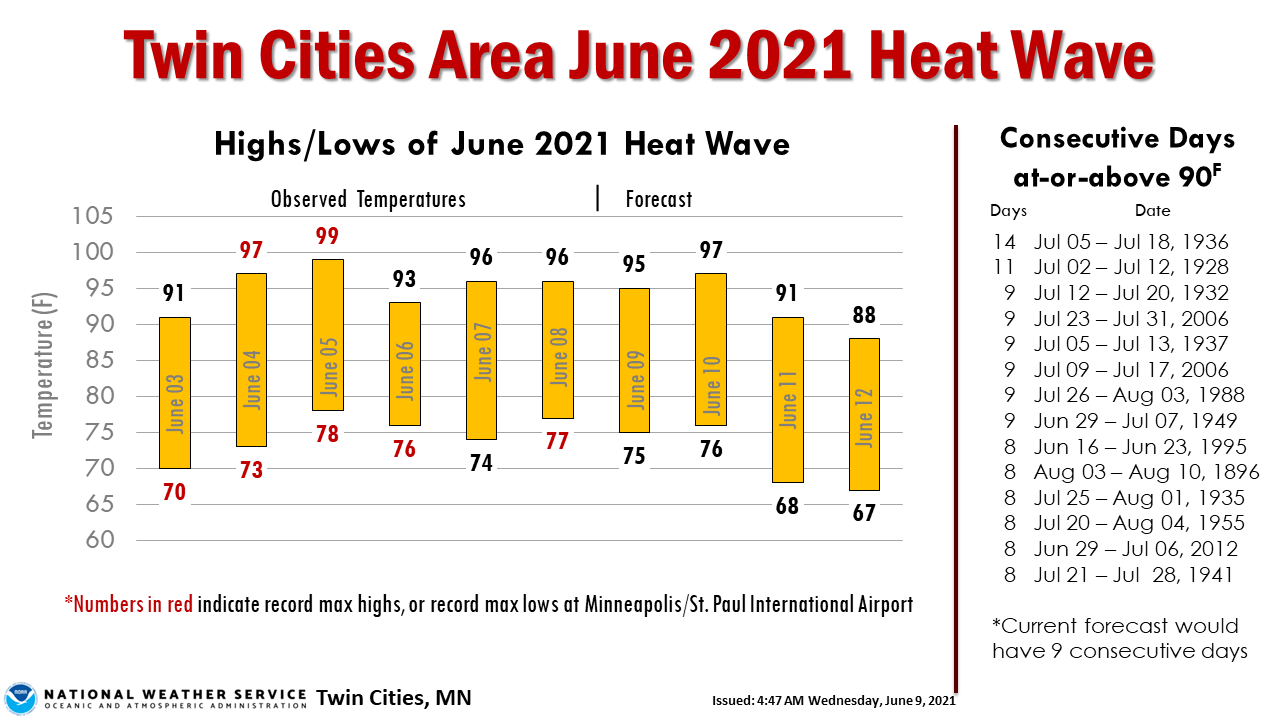 The Twin Cities should easily stay in the 90s through Thursday, putting the run of 90s at eight days, which would tie in ninth place for a 90 or above stretch.

Clinging to the 90s into Friday would shoot the Twin Cities into a tie for the 3rd longest stretch. Either way, it will earliest on record the area has ever seen such a long trend of 90s.

Meanwhile, there will still be enough instability Thursday for a few showers or storms to develop, especially in the afternoon. None of that activity is expected to be widespread or likely to become severe. 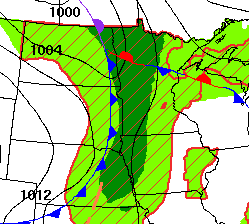 The next statewide rain chance comes Friday with a storm that brings scattered showers and thunderstorms.

Much of the rain should stay light and under one-quarter inch, and it currently looks like those rain totals lessen in eastern Minnesota.

Clouds and moisture with the system should temper the heat slightly already Friday. Behind the associated cold front, most of the state will see highs in the 80s Saturday. Next week is likely to continue the warm trend with 80s and low 90s around the state, but it is not expected to be quite as hot as the current heat wave.

To see the original report and see weather updates, follow this link to the MPR News website. https://www.mprnews.org/story/2021/06/09/minnesotas-heat-wave-is-poised-to-set-more-records