Latest on COVID-19 in MN: Continued record lows in most disease metrics The pandemic has been in decline recently, but the number of newly reported cases ticked up to 302 Saturday from 257 the day before.

There were also 16 reported deaths. Most of those who died in the most recent report lived in private residences. Only two were in a long term care or assisted living facility. The dead ranged in age from the late 50s to over 90.

Minnesotans 16 and older with at least one dose of the vaccine still stands at 65 percent, although vaccination rates vary widely by county.

The goal of getting at least one vaccine dose into 70 percent of the state’s 16-and-older population by July 1 is turning into a slow march.

Officials remain hopeful, noting that the 70-percent goal has been reached already in the Twin Cities metropolitan area. Outside the region, however, it’s only about 57 percent. At the current pace, Minnesota might not hit 70 percent until late July. 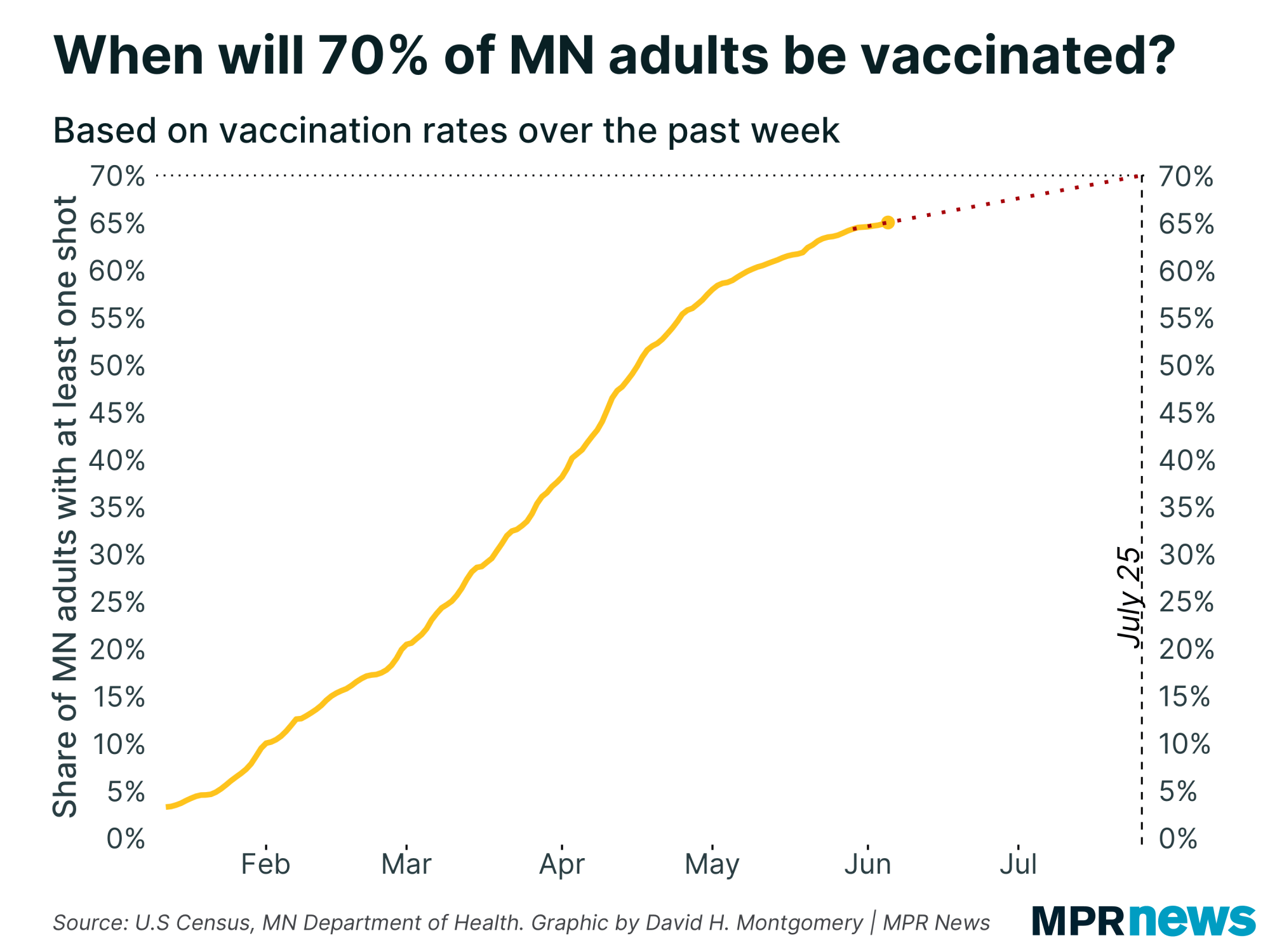 Overall, though, the disease metrics are looking good in the first weekend of June. Falling daily case counts and low positive test rates are signaling the COVID-19 virus is less prevalent in Minnesota than at any time since the pandemic’s first month or so.

How quickly have conditions improved? Friday’s state Health Department report showed Minnesota’s averaging only 231 new cases a day over the past seven reporting days. A month ago, it topped 1,500 a day.

Meanwhile, the count of known, active COVID-19 cases stayed below 2,500 for the fourth consecutive reporting day — the first time that’s happened since April 2020. 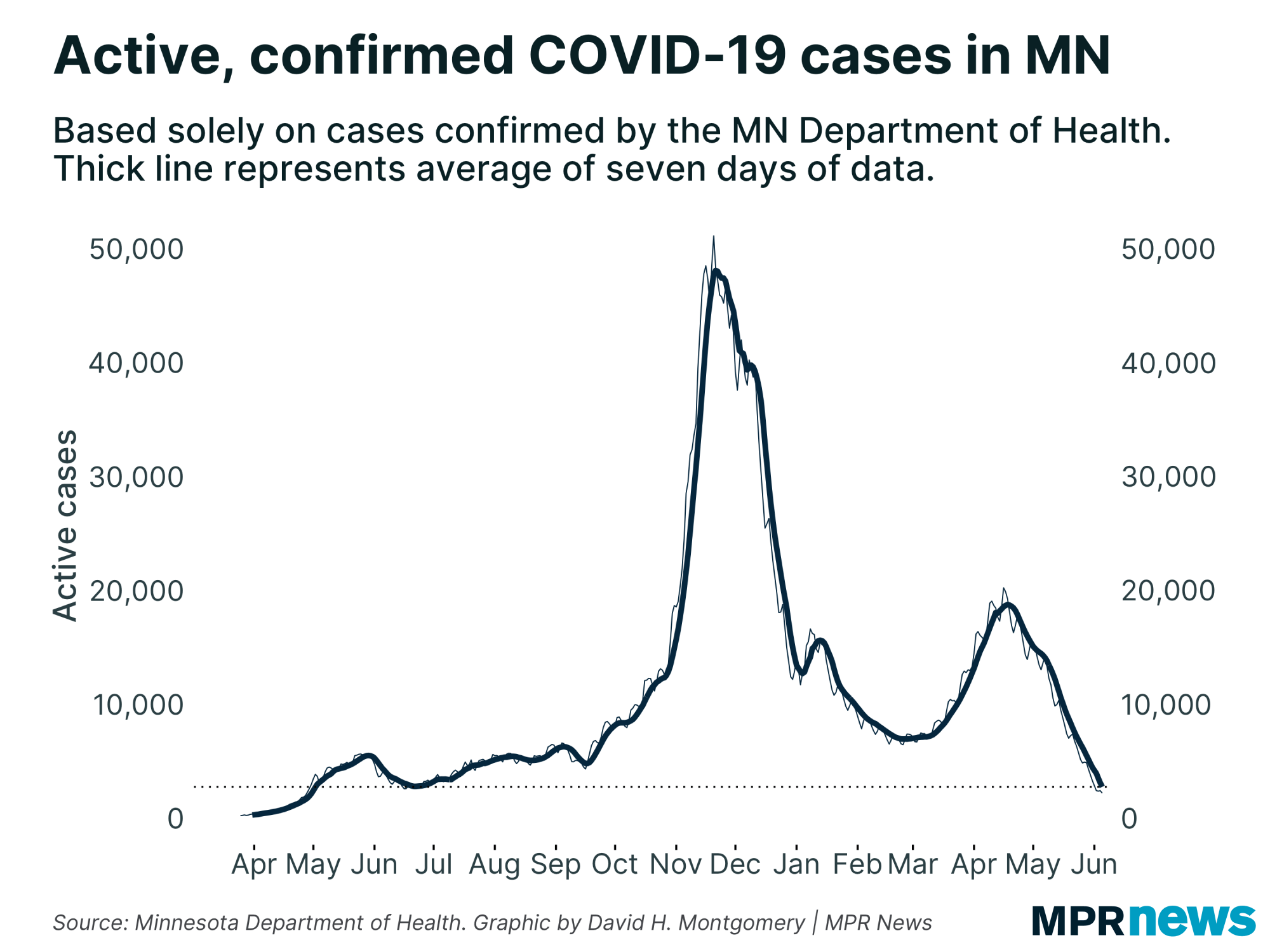 As of Thursday, there are 252 people hospitalized with COVID-19 in Minnesota; 66 in intensive care. Both figures continue to trend down from their spring peaks. In late April, hospitalizations were approaching 700 people, with more than 200 in ICUs.

Average daily hospital admissions have fallen by about half over the past two weeks. 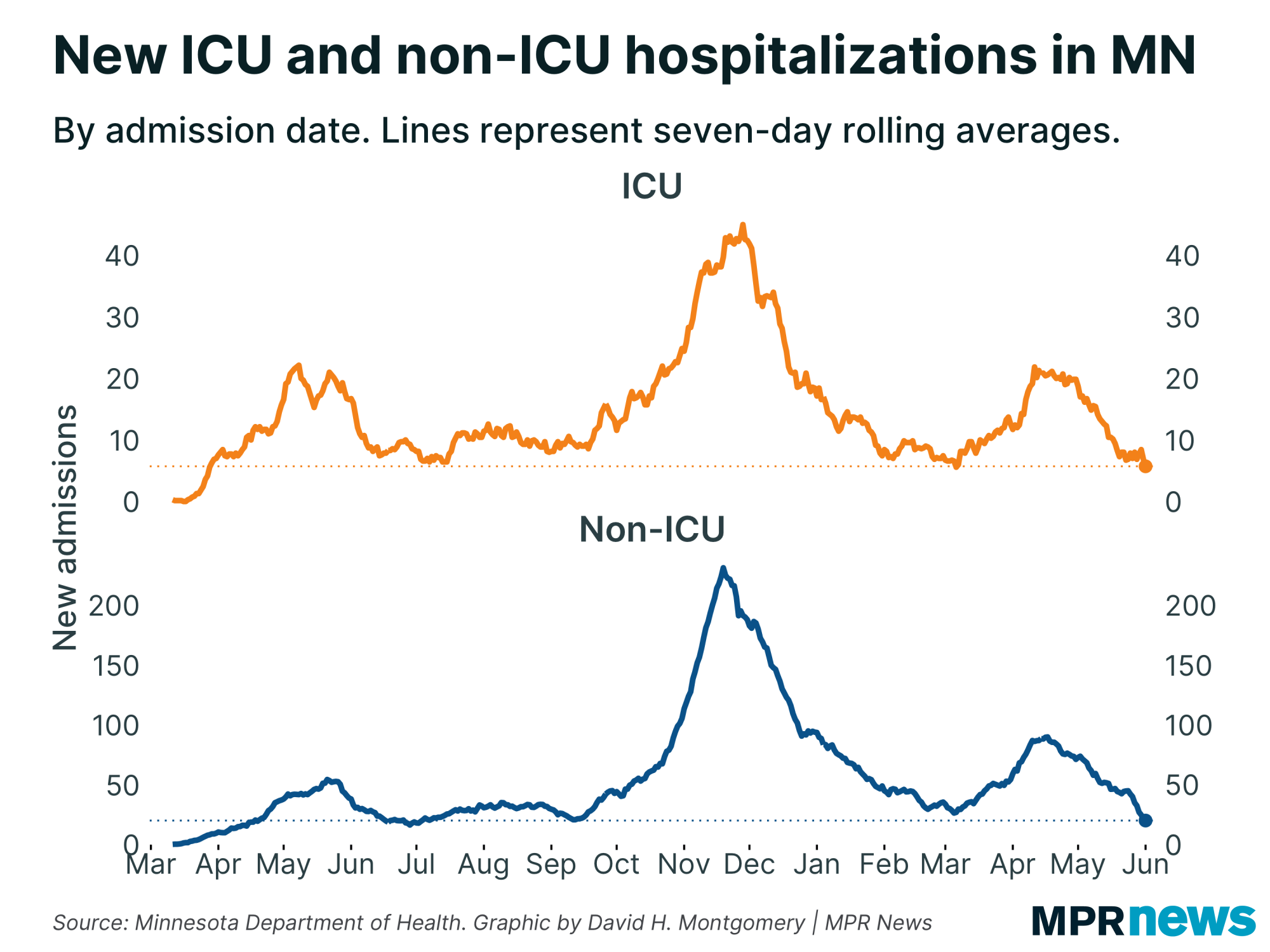 Sixteen newly reported deaths on Saturday put Minnesota’s pandemic toll at 7,461. Most of those who died in the most recent report lived in private residences. Only two were in a long-term care or assisted living facility. The dead ranged in age from the late 50s to over 90.

Among those who have died, about 60 percent had been living in long-term care or assisted-living facilities; most had underlying health problems. 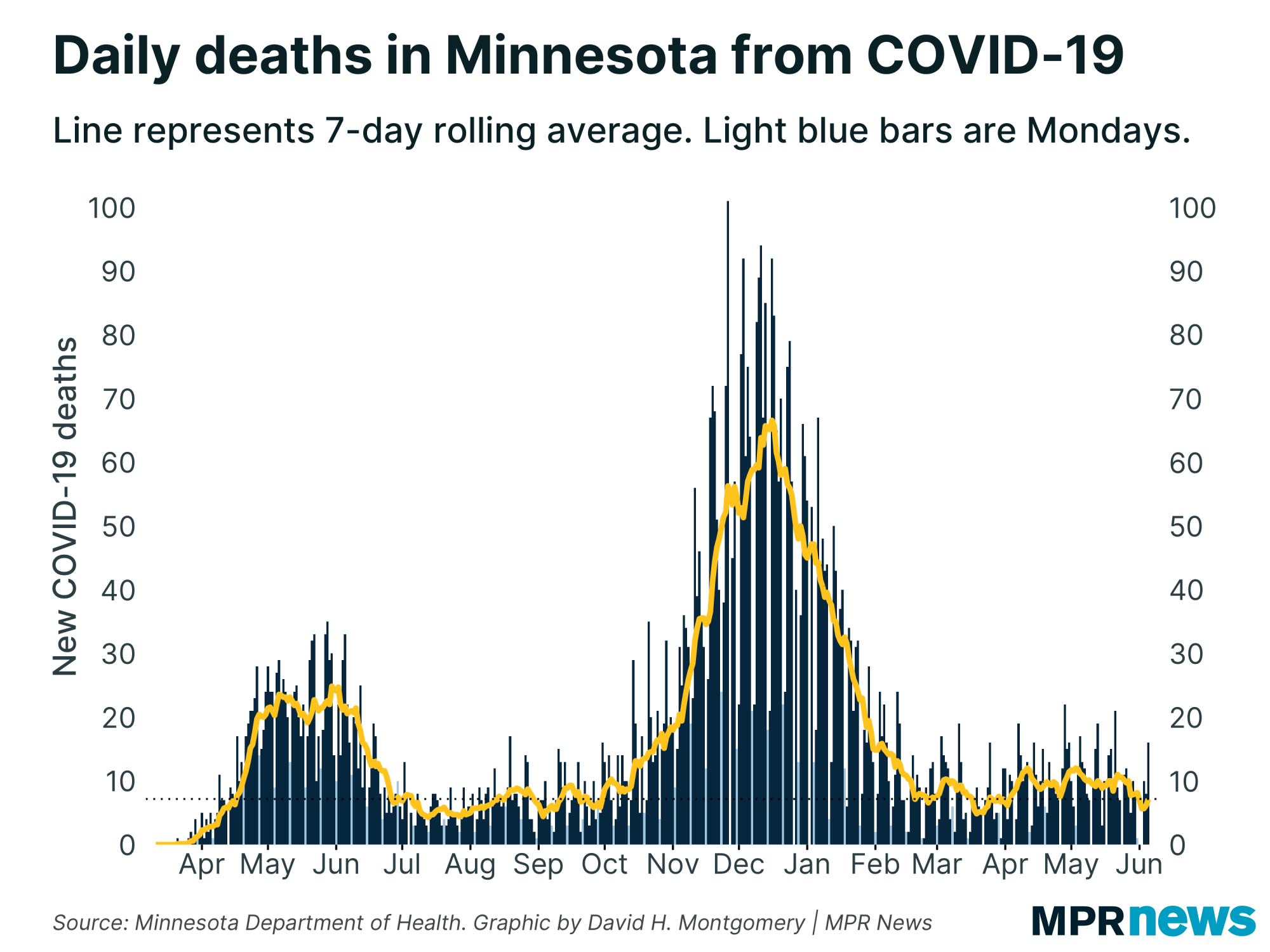 Deaths outside of long-term care have seen a significant drop recently. They’re averaging three per day now compared to nine daily deaths a month ago.

The state’s recorded 602,428 total confirmed or probable cases so far in the pandemic, including the 302 posted Friday. 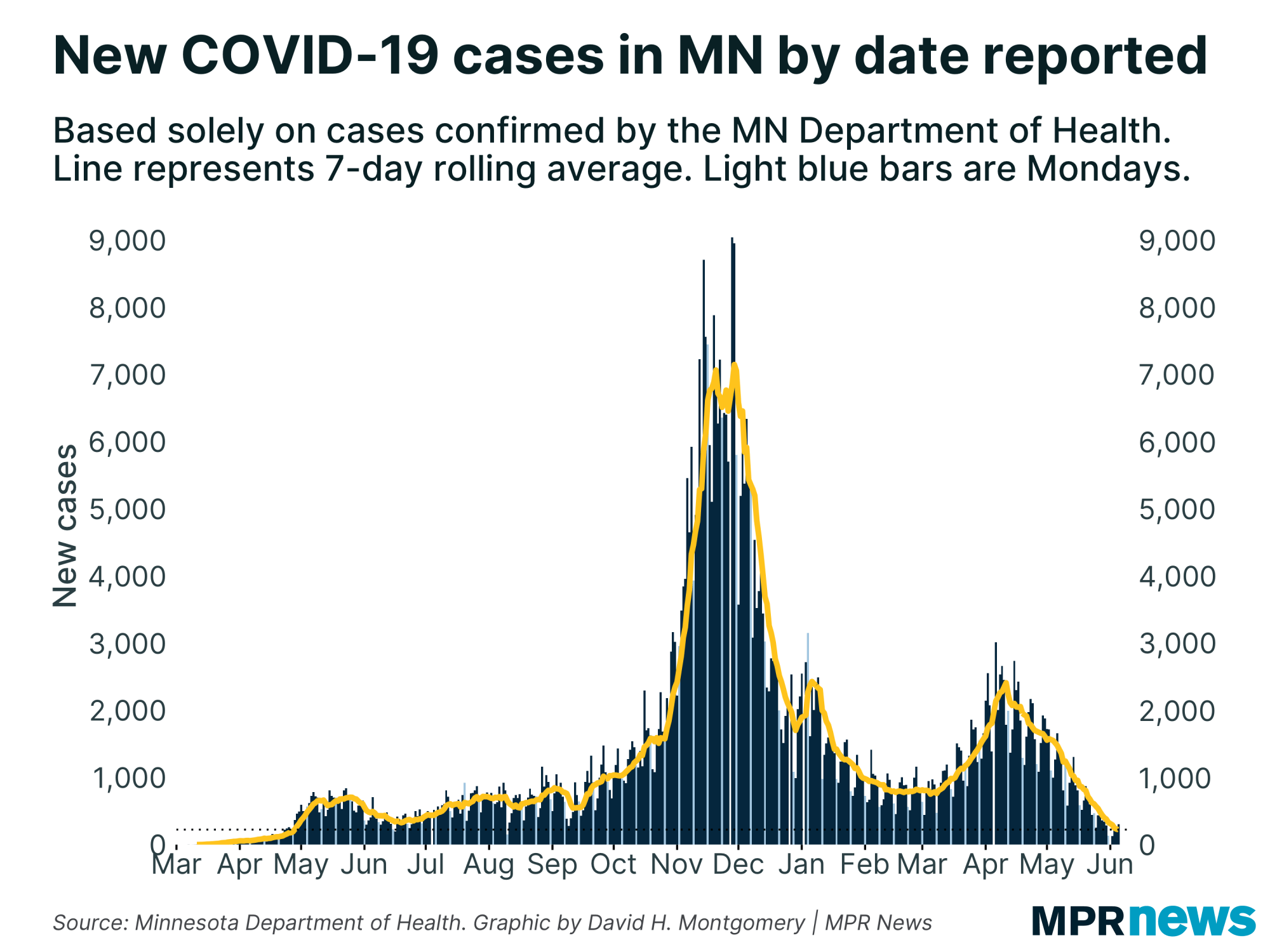 About 98 percent of Minnesotans known to be infected with COVID-19 in the pandemic have recovered to the point where they no longer need to isolate.

Regionally, all parts of Minnesota are in better shape than they were in late November and early December. Case counts had crept up across the state during April, but now they are low and plunging in every age group and every region. 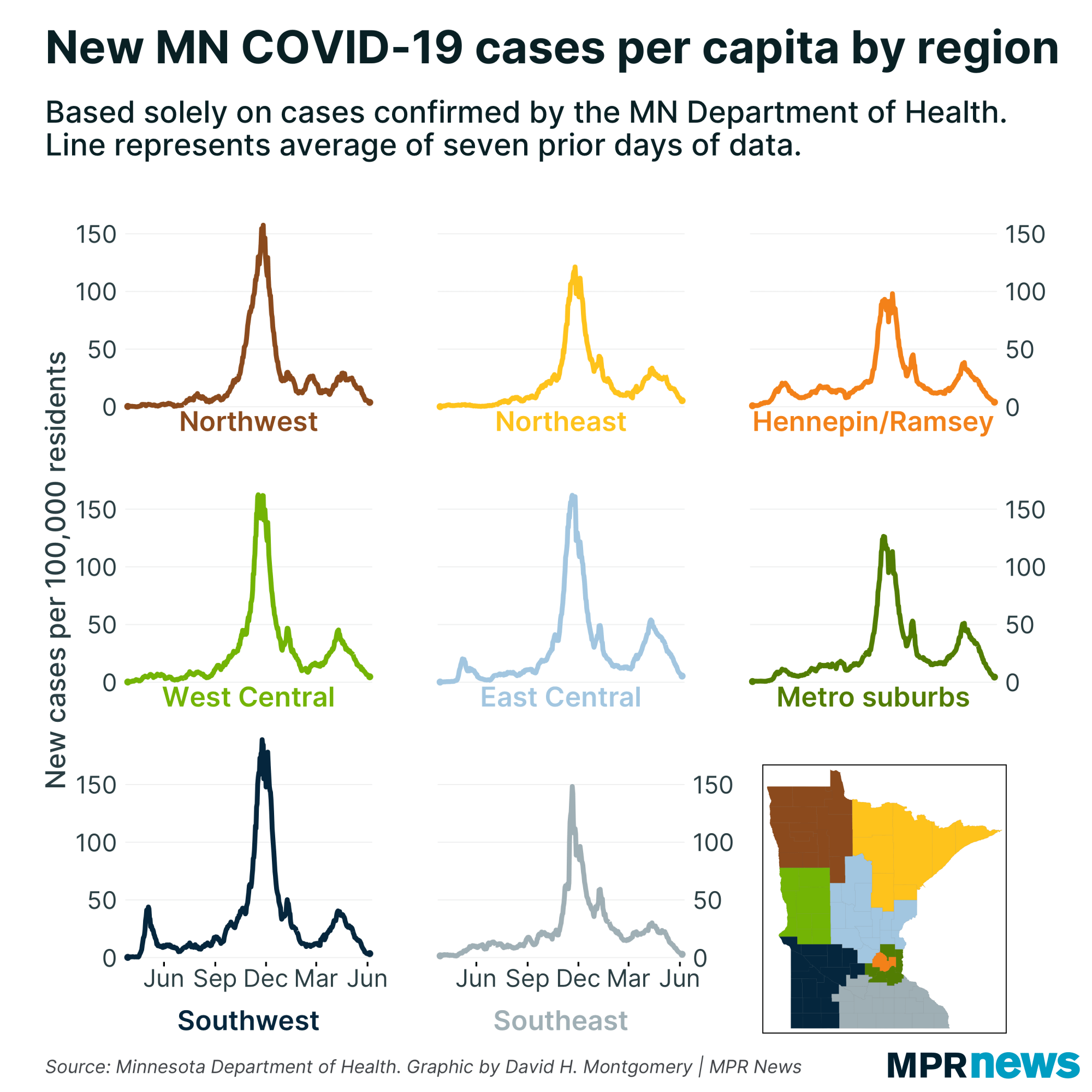 People in their 20s still make up the age bracket with the state’s largest number of confirmed cases — more than 111,000 since the pandemic began.

The vaccination pace has been struggling to regain its traction the past six weeks and is now declining rapidly. Minnesota is down to just over 5,000 new first doses per day. And this rate is falling. 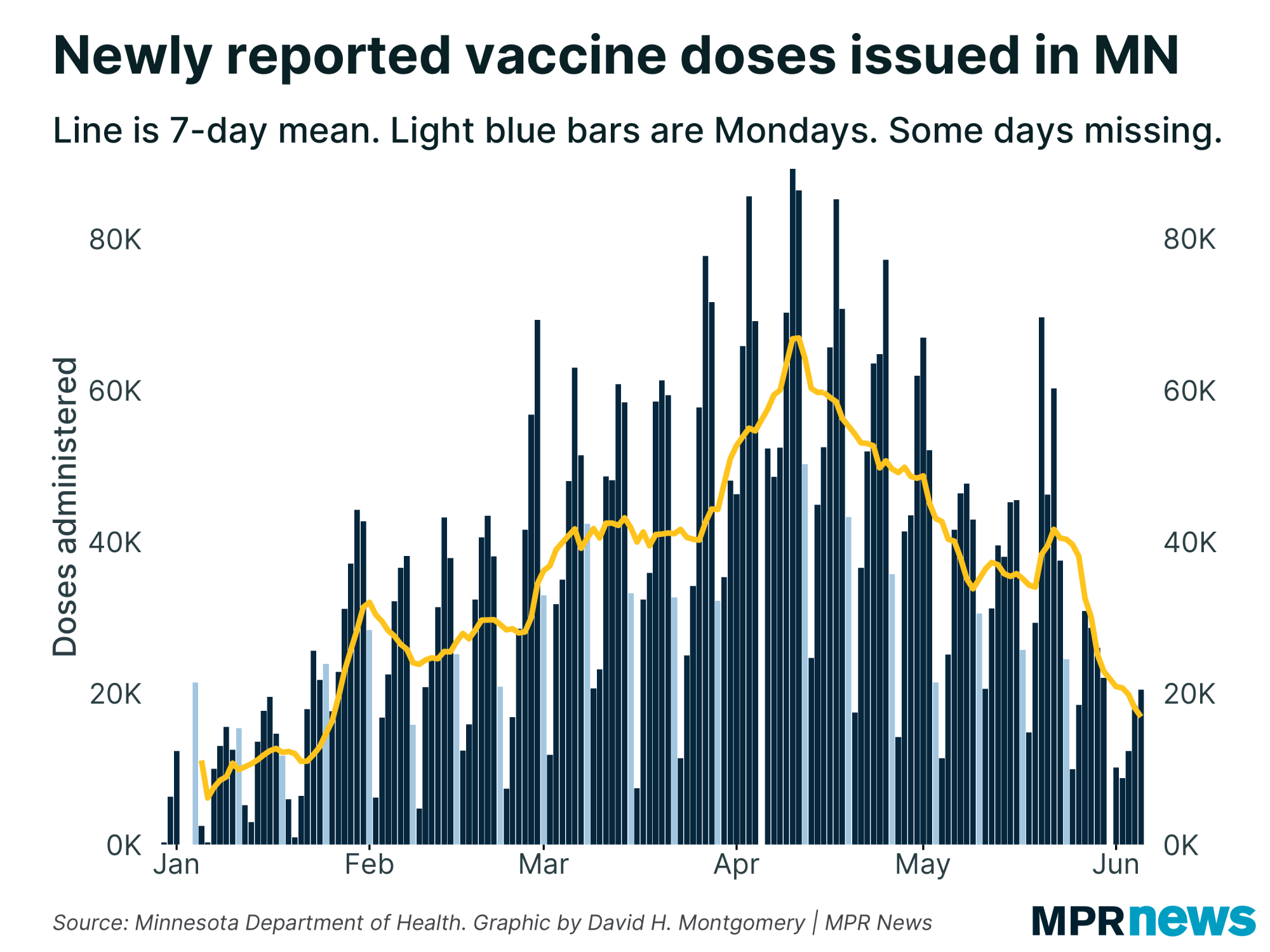 More than 2.8 million residents 16 and older now have at least one vaccine dose. More than 2.6 million have completed their vaccinations as of Friday’s update.

That works out to about 59.5 percent of the 16-and-older population completely vaccinated and 64.9 percent with at least one shot, including 90 percent of those 65 and older.

Minnesota’s seen notable growth in the number of children ages 12 to 15 getting vaccinated since mid-May, when federal authorities approved the Pfizer vaccine for use at those ages.

Health Department data shows more than 80,000 12-to-15-year-olds with at least one dose. That’s about 28 percent of that population already with at least one shot. The pace, though, has dropped off significantly following the early surge.

State public health leaders have been pleading with those still not vaccinated to get their shots. Eligible Minnesotans can now walk in for a COVID-19 vaccination without an appointment at the state’s community vaccination program locations.

Gov. Tim Walz last week rolled out incentives, including state park passes and Minnesota State Fair tickets, to nudge people to get their shots. Around 2,000 people have registered to get an incentive so far, Minnesota Health Commissioner Jan Malcolm told reporters Wednesday.

To see the original reports and read related stories, follow this link to the MPR News website. https://www.mprnews.org/story/2021/06/06/latest-on-covid19-in-mn
News