Author Ben Percy writes 10 to 12 hours a day, and says exercise such as running and chopping wood are vital to his creative process.   Photo: Euan Kerr | MPR News

Have you ever imagined what would happen if a meteor shower hit your neighborhood? Ben Percy has. In great detail. Sitting outside his Northfield home, Percy reads from "The Ninth Metal" where he describes the moment before the destruction and terror begins:

"In Northern Minnesota the nightbirds went silent. Worms and salamanders twisted out of the dirt. Cats yowled in yards and dogs whimpered under beds. Some people suffered from sudden migraines and others noticed their fillings tanging their mouths with the taste of metal and others shook their cellphones and said 'Hello? Can you hear me? Hello?"

The meteors pound the Arrowhead. But when people begin rebuilding in later years they find the devastating shower has left an unexpected treasure: a metal never before seen on Earth. 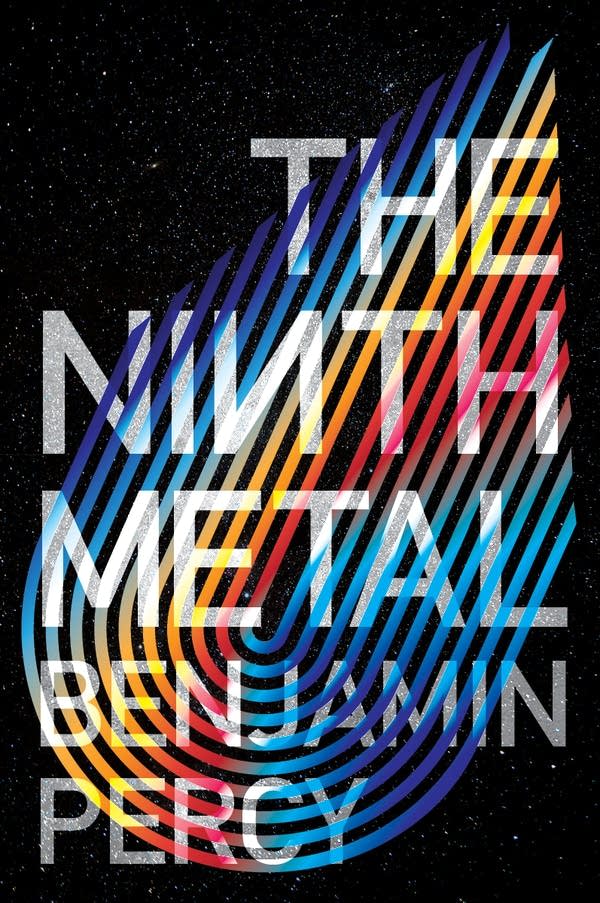 Percy consulted with a physicist friend at Carleton College as he invented an extremely energy-absorbent element which could change world geopolitics.

"I wanted to create a metal that absorbed energy on a quantum level and in doing so had kinetic properties that would upend the weapons and energy industry," explains Percy.

Not only would Omnimetal engines be able to power themselves, Omnimetal weapons could make an army pretty much invincible.

And in Percy's tale, all the Omnimetal in the world is in one place: blasted into the rugged landscape of northern Minnesota.

"So the middle of nowhere becomes the center of everything," said Percy.

The world descends on the Arrowhead: speculators, prospectors, miners, and mobsters, all looking to get rich quick. It's a 21st-century Deadwood.

He tells the story through the the eyes of the locals who survived the meteors. They're traumatized, but many stand to make millions by selling their mineral rights.

They range from wealthy families who made money from iron and taconite, to a local deputy trying to keep the peace in a place where legality takes a backseat. Government scientists work on top-secret research. There are tribal members and environmental activists, as well as members of a meteor-inspired religious cult.

"And it was a hell of a lot of fun to see it all play out," Percy says with a glint in his eye.

Percy drew on the ongoing controversy over copper-nickel mining near the Boundary Waters, He also drew on the experience of North Dakota's man camps during the Bakken oil boom.

He did that all in the basement writing room. Another important part of the equation stands in the yard nearby, the chopping block.

"The 8-pound maul is my backyard gym," he says as he prepared to split another log.

Percy says chopping wood, running, and lifting weights have kept him in good shape for the 10 to 12 hours a day he spends at his desk writing. And he's been writing a lot during the pandemic.

"Here I am writing for Marvel Comics the series Wolverine and X-Force and another that's about to be announced."

There's a new Marvel Guardians of the Galaxy audio drama called “Wastelanders: Old Man Star-Lord” which also releases June 1. He's working on TV and film scripts, and a video game he can't talk about because of non-disclosure agreements.

"And that is just a taste," he said. "I'm juggling a few other chainsaws beyond those."

But he's really excited about "The Ninth Metal." Magers and Quinn Booksellers in Minneapolis will host a virtual release June 1. It's the first of three connected novels Percy's calling the Comet Cycle. He says when he proposed the novels he also proposed the marketing plan, similar to that used for comic books.

"They are coming out as paperbacks, each within six months of each other," he said "And later on they will be bound together into a hardcover omnibus with bonus material."

Having written about characters from the Marvel universe, Percy says he's now creating his own universe, and he sees the potential for more books, and many other stories.

Speaking of which: He still has the final chapters of the third Comet Cycle novel to finish, so it's back to the desk.

To listen to an audio version of this story and read related reporting, follow this link to the MPR News website. https://www.mprnews.org/story/2021/06/01/benjamin-percy-novel-reimagines-minnesota-as-meteorstrewn-c...