Boundary Waters blaze could be sign of busy wildfire season Rain and humidity slowed a wildfire burning in the Boundary Waters Canoe Area Wilderness, but the fast-growing blaze — estimated about 950 acres in size on Wednesday — threatened some seasonal cabins earlier this week. Some living in northeastern Minnesota wonder if it's a sign of more fires to come.

On Tuesday around noon, fire officials estimated the Bezhik Fire was only about 40 acres in size. It was burning in a remote part of the Boundary Waters — an area of red and white pine and rocky outcroppings.

"As the wind kicked up, then you can see some plumes here and there where it would take off. And then it went to just the regular kind of medium to greenish smoke, which means it was pretty hot," Huber said.

The Bezhik Fire burned out of the wilderness and onto the private property of at least seven landowners. The seasonal cabins were unoccupied when the fire came through, St. Louis County authorities said.

Superior National Forest spokesperson Tim Engrav said six aircraft fought the fire from above while at least 40 firefighters worked on the ground.

"They dropped a lot of water to protect those areas and then get the ground crews in when it was safe to do so later in the evening,” Engrav said. “And then several of those crews also stayed overnight up there to continue to monitor the situation."

Officials are still assessing the damage. 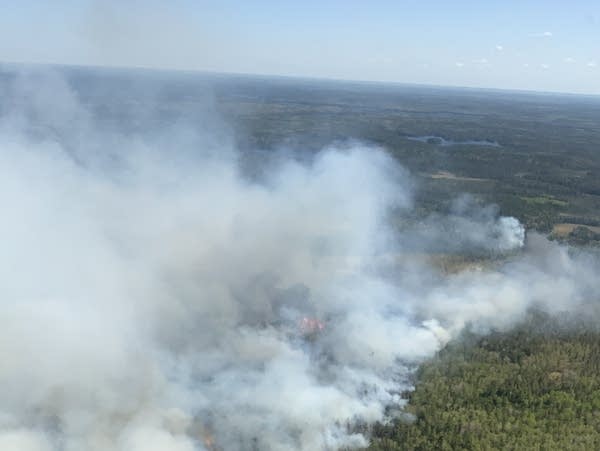 While rain is in the forecast for the next couple days, Huber — the resort owner who is also a former volunteer firefighter in Ely — said the forest on the western side of the Boundary Waters is quite dry.

“Everything goes in a cycle. Is this going to be our year? Because, that's just the way it works," Huber said.

"It really is cyclical,” agreed Ellen Bogardus-Szymaniak, the district ranger for the Tofte District of the Superior National Forest. “It's about every 10 to 12 years we have a fire season. A big one."

The last big fire to sweep though the Boundary Waters was the Pagami Creek Fire, which burned about 100,000 acres 10 years ago this September. There hasn't been another large-scale fire since.

The cycle does not mean 2021 is destined to see the next big fire season. The right amount of rain, in regular intervals, could prevent it.

“If we can get moisture every 10 days to two weeks, we'll be OK. If we don't, then we're going to have a pretty intense fire season," Bogardus-Szymaniak said.

Only northwestern Minnesota and the far southern part of the state are currently experiencing drought conditions. There's moderate to very high fire danger across all of northern Minnesota.

That's especially true on the western side of the Superior National Forest, away from Lake Superior.

“I always equate it to when you start a fire in your fireplace,” explained Patty Johnson, a fire management officer for the Forest Service. “You want those logs to be dry, so they burn. And when they don't, they kind of smolder because they have moisture in them. So right now, on that side of the forest, all that stuff is pretty dry. And it takes a while to get to that point.”

It takes a significant amount of rain to get those logs and other fuels wet enough so they don't catch fire easily.

There's one other important point to keep in mind, Johnson says: Some wildfire is good for the forest. Minnesota's boreal forest evolved with fire, and it needs regular, low-intensity burns to stay healthy and regenerate.

The balance is to allow fire to do its job on the landscape — without threatening human life and property.

To that end, the Superior National Forest has called in extra engines and firefighters to help this spring in anticipation of a busy fire season, including two so-called hotshot crews from Montana and Tennessee.

To listen to an audio version of this story and see related articles, follow this link to the MPR News website.  https://www.mprnews.org/story/2021/05/20/boundary-waters-blaze-could-be-sign-of-busy-wildfire-season