Students gather on bleachers as a therapist leads them through group exercises for mental health during a student-organized school walkout at Tartan High School in April in Oakdale, Minn. Photo: Elizabeth Shockman | MPR News file

By Elizabeth Shockman of Minnesota Public Radio News - May 19, 2021

Sixteen-year-old Kyree Wilson, an 11th-grader at North Community High School in Minneapolis, has been learning remotely since the pandemic closed her school last March. Being stuck in a room, only able to access her teachers and lessons on a computer with hit-and-miss internet has been hard.

“Computers! Man, they be acting up!” she laughed.

Wilson is finishing the year in distance learning, but said she’s ready to go back in person.

“With this year coming to an end, I think I want to go back,” Wilson said. “I want to have a high school experience, be able to go to prom, make good friends. I don’t really want to be in my house for my senior year.”

Distance learning due to COVID-19 has made it all too easy to fall behind in school. Wilson has managed to keep up her grades, and she even volunteers on the student council and as a peer tutor. But she knows the lack of structure has made it easy for her classmates to miss deadlines and let work pile up. She said she knows firsthand the social isolation makes it harder to shake yourself out of a funk when you’re feeling down. 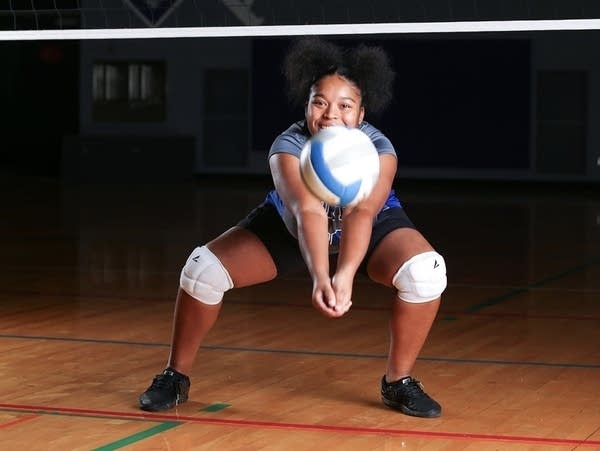 “I feel like people need emotional support. There are too many students that are not confident in school. There’s some students who are just giving up,” Wilson said. “It’s so hard and sad that you have to base your future off of this present when everything is happening. It’s like, ‘I’m going through all this. My future better be good.’ ”

On top of the pandemic, there was also the murder of George Floyd by a Minneapolis police officer one year ago, and more recently, the killing of Daunte Wright by a Brooklyn Center police officer. Gun violence has surged in Minneapolis; three children on the north side have been shot in recent weeks.

Wilson’s principal, Mauri Friestleben, knows it’s been a lot for students to absorb all the trauma.

“Not only do we close off or shut off because of COVID, but we had a significant, major event — especially those of us here in Minneapolis, Minnesota, with the murder of George Floyd,” Friestleben said. “We have not collectively processed (all of this) in person.”

It’s not just Minneapolis. In a recent University of Minnesota survey, sixth through 12th graders across the state said getting help with mental health was one of the biggest challenges they were facing.

And a recent national report found youth mental health had worsened over the last year. Nearly 10 percent of 11- to 17-year-olds report having severe major depression. The study also found that during the pandemic, young people have been more likely than any other age group to score for moderate to severe symptoms of anxiety and depression.

But the transition back to in-person learning comes with its own challenges.

Kristen Wiik, a pediatric neuropsychologist at HCMC, says her team was working at capacity with kids before the pandemic. Now there’s a long waitlist, and the hospital refers many kids to other practices. She wishes more schools had school-based mental health services and predicts the demand for mental health support has only just begun.

“I think we’re still in it. We’re still in the middle of the storm,” Wiik said. “One thing we’re anticipating is that the transition back to regular full-time school for a lot of kids is going to be really hard.”

At Hopkins West Junior High, social worker Tina Flowers said the first weeks back in person have been a mixed bag. Many students were excited to be back with their classmates and teachers, but those first days back were also flooded with incidents: kids testing positive for COVID-19, calls to child protection, students mentioning they were thinking about suicide.

“When kids started coming back into the building, it seemed like the mental health needs were so high,” Flowers said, “They definitely were amplified.”

This stress comes out in a variety of ways for students.

In St. Francis, Superintendent Beth Giese said elementary students aren’t sure how to act in school or follow directions after being out for so long. She’s noticed a surge in depression and vaping among teenagers in her school. And the number of students failing individual classes is unprecedented.

“The students that are coming back now — we are seeing behaviors that we have never seen before,” Giese said. “A lot of outbursts, skipping class. ...Like all of us, they’ve either picked up some really good skills from working at home, or you’ve picked up some bad habits.”

Tenth grader Aaliyah Murray, who lives in Fridley, said she’s struggled to learn new material this year. Most of her classes are prerecorded videos. The lack of schedule and interactions with teachers makes her feel lost.

“It’s been very stressful. I haven’t even had a full year of high school,” Murray said. “This year has been full online. I haven’t learned anything. I don’t even have Google Meets with my school. They just gave me all my work for the semester — they have me doing it. It’s very hard, and it’s like, zero motivation.”

But Murray’s found a sense of purpose in giving back to other students and creating her own online community when she couldn’t tap into one at a school building.

In the spring of 2020 she started the Instagram account MN Teen Activists to give students a place to talk about the racism they were experiencing at school and in their communities. The Instagram page has grown exponentially to over 20,000 followers.

Murray has helped organize food drives, and in April she helped put together a statewide school walkout attended by thousands of her peers. She’s proud of the work and learning she’s done on her own and with classmates.

“Youth have a lot of power. Our voices (should) be heard,” Murray said. “For me it’s just seeing that people are coming together and having unity. That’s the main thing for me.”

“It’s like this pervasive state of overwhelmed-edness,” Friestleben said. “We know intellectually, ‘Wow, we’re under a lot.’ But we don’t know quite how to release it or process it, so it’s coming out in really bizarre kinds of side ways.”

Friestleben is trying to make it as easy as possible to return to in-person classes, allowing students to take half days if they need it. She also tries to help her students recognize that Floyd’s murder is weighing on them all, but it doesn’t need to paralyze them.

When Friestleben thinks of what her students and staff need in coming weeks and months, she’s focused on getting her educators the mental health training they need to take care of themselves and the kids in their classrooms. But she bristles at the thought of trying to “catch kids up” academically after a difficult year.

It’s the end of the school year, the pandemic is waning, and next week marks one year since Floyd was murdered. But Friestleben knows the work for her community is just beginning.

If you are having thoughts of suicide, call the National Suicide Prevention Lifeline at 800-273-8255 (TALK), or go to SpeakingOfSuicide.com for a list of additional resources.

To listen to an audio version of the original report and read related stories, follow this link to the MPR News website. https://www.mprnews.org/story/2021/05/18/were-still-in-the-storm-minnesota-students-struggling-with-...