Nurse Sam Kissi (left) draws a dose of a COVID-19 vaccine into a syringe before administering it to Zarea Fonge at a vaccine clinic put on by Black Nurses Rock and Ramsey County at Shiloh Missionary Baptist Church in St. Paul on March 28.  Photo:  Evan Frost | MPR News file

As Minnesota climbed toward the milestone of 2 million completed COVID-19 vaccinations over the weekend, the pace of vaccinations in the state continued to fall.

Sunday’s update from the state Department of Health showed 1,972,888 residents have completed their vaccinations — about 44.7 percent of the state’s 16-and-older population. The state could pass the 2 million mark as soon as Monday’s update.

But the pace of vaccinations has been slowing in Minnesota. Averaged over the past week, as of Sunday the state was seeing about 45,000 vaccinations a day. That’s down from more than 60,000 a day at the peak in mid-April. 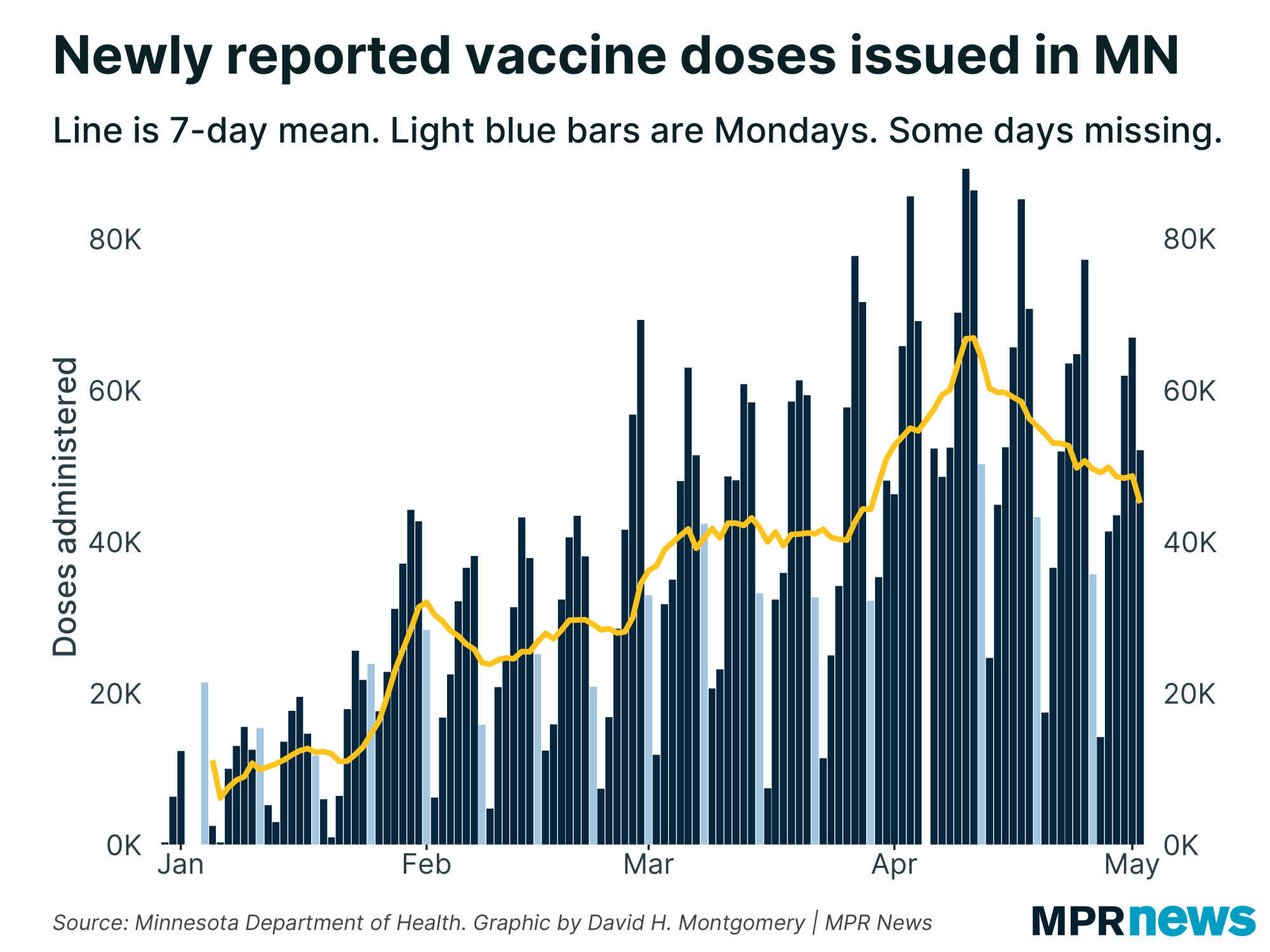 A slight increase in vaccine supply may help boost the pace in the coming week, but public health leaders remain concerned about that lagging pace and what seems to be a wavering public will around mask wearing and other precautions.

Still, most COVID metrics have improved significantly since mid-April, and Gov. Tim Walz in coming days is expected to further loosen some curbs on public gatherings, likely increasing capacity limits for bars, restaurants and other venues.

The count of known, active cases fell back below 15,000 in Sunday’s numbers, down from the most recent peak of about 20,000 in mid-April. 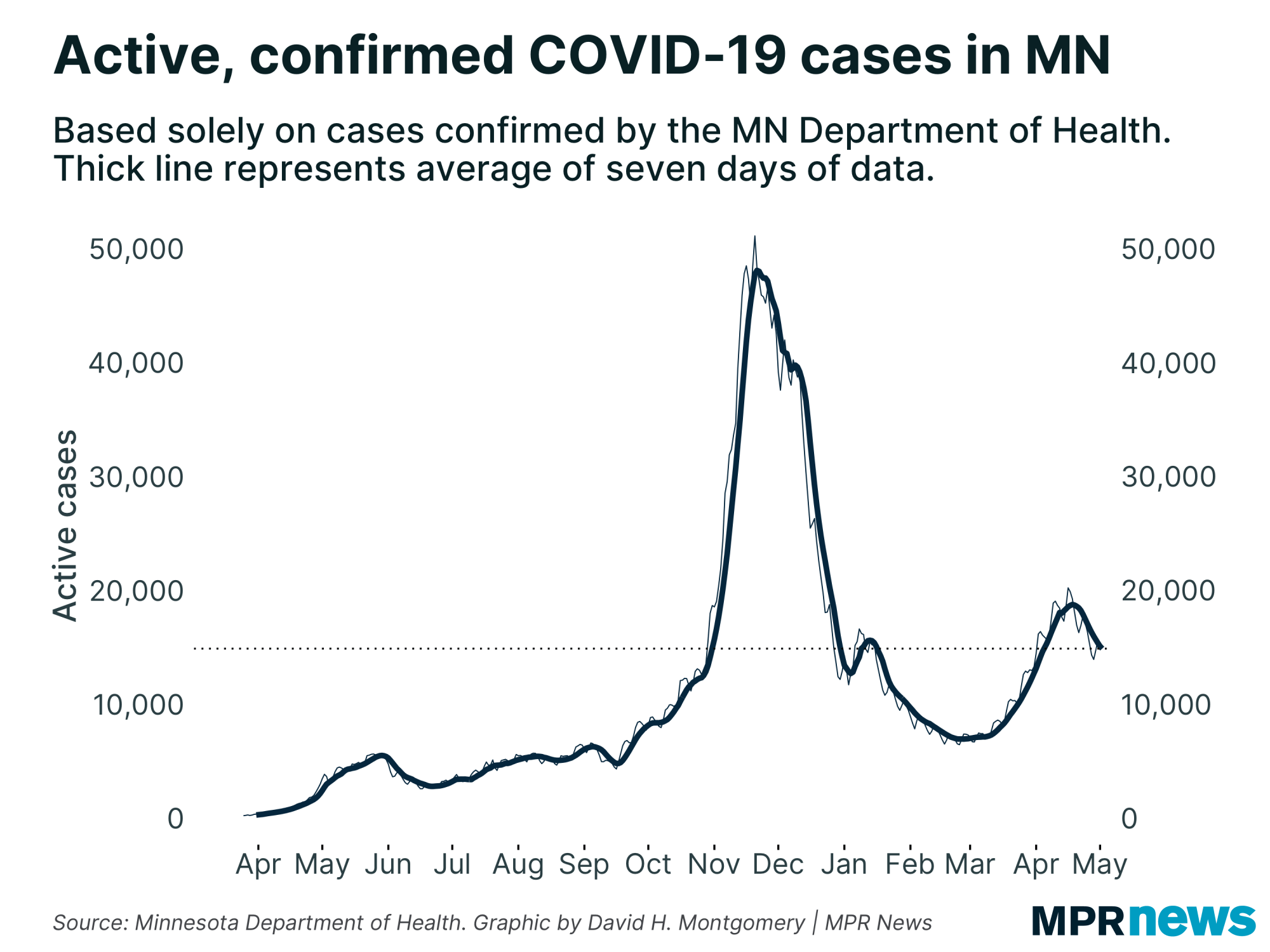 The percentage of COVID-19 tests coming back positive remains just below the 5 percent threshold that experts find concerning.

Six deaths reported Sunday brought Minnesota’s pandemic toll to 7,160. Among those who have died, about 61 percent had been living in long-term care or assisted living facilities; most had underlying health problems. 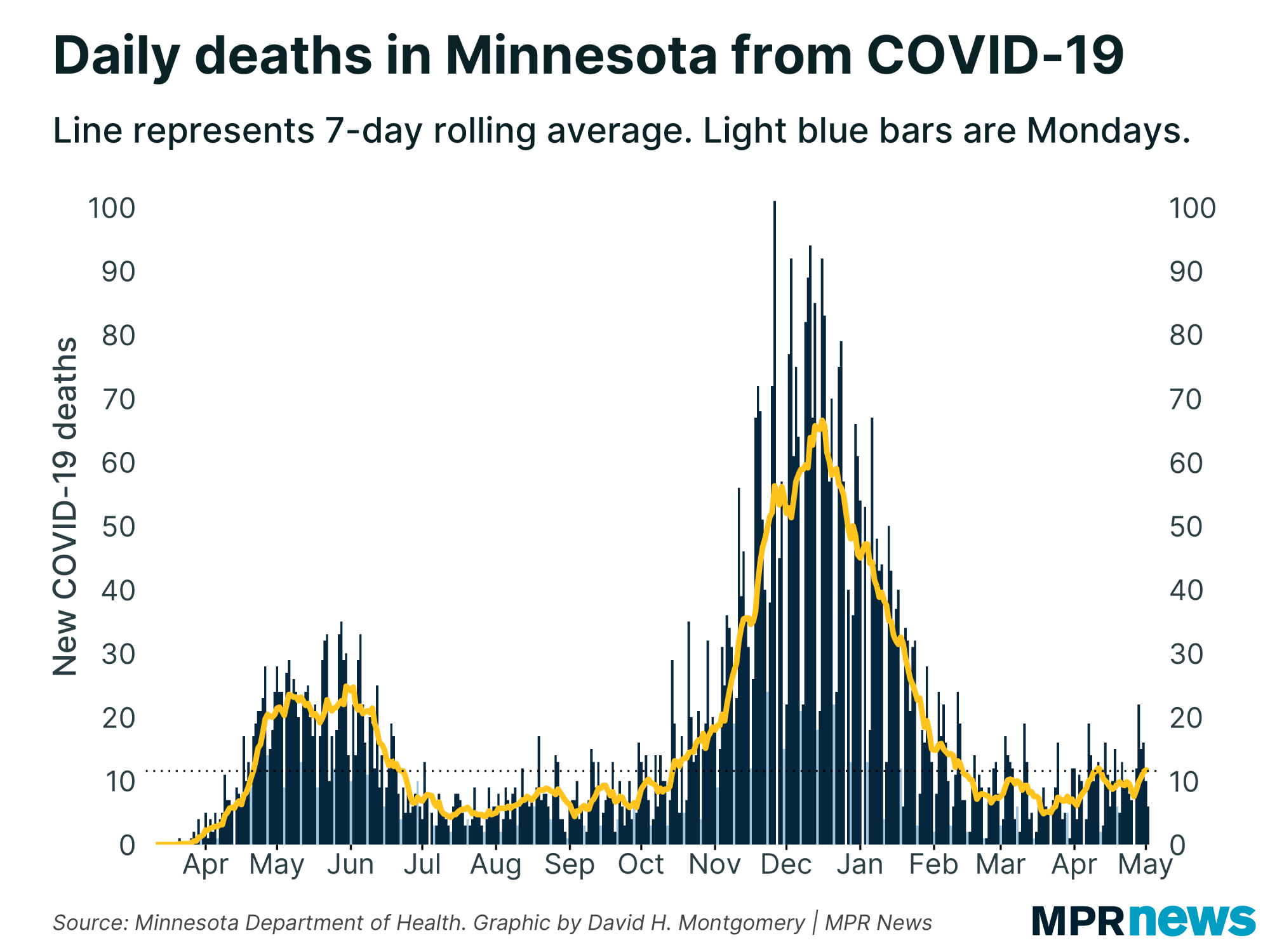 The state has recorded 579,235 total confirmed or probable cases so far in the pandemic, including the 1,713 posted Sunday. About 96 percent of Minnesotans known to be infected with COVID-19 in the pandemic have recovered to the point where they no longer need to isolate. 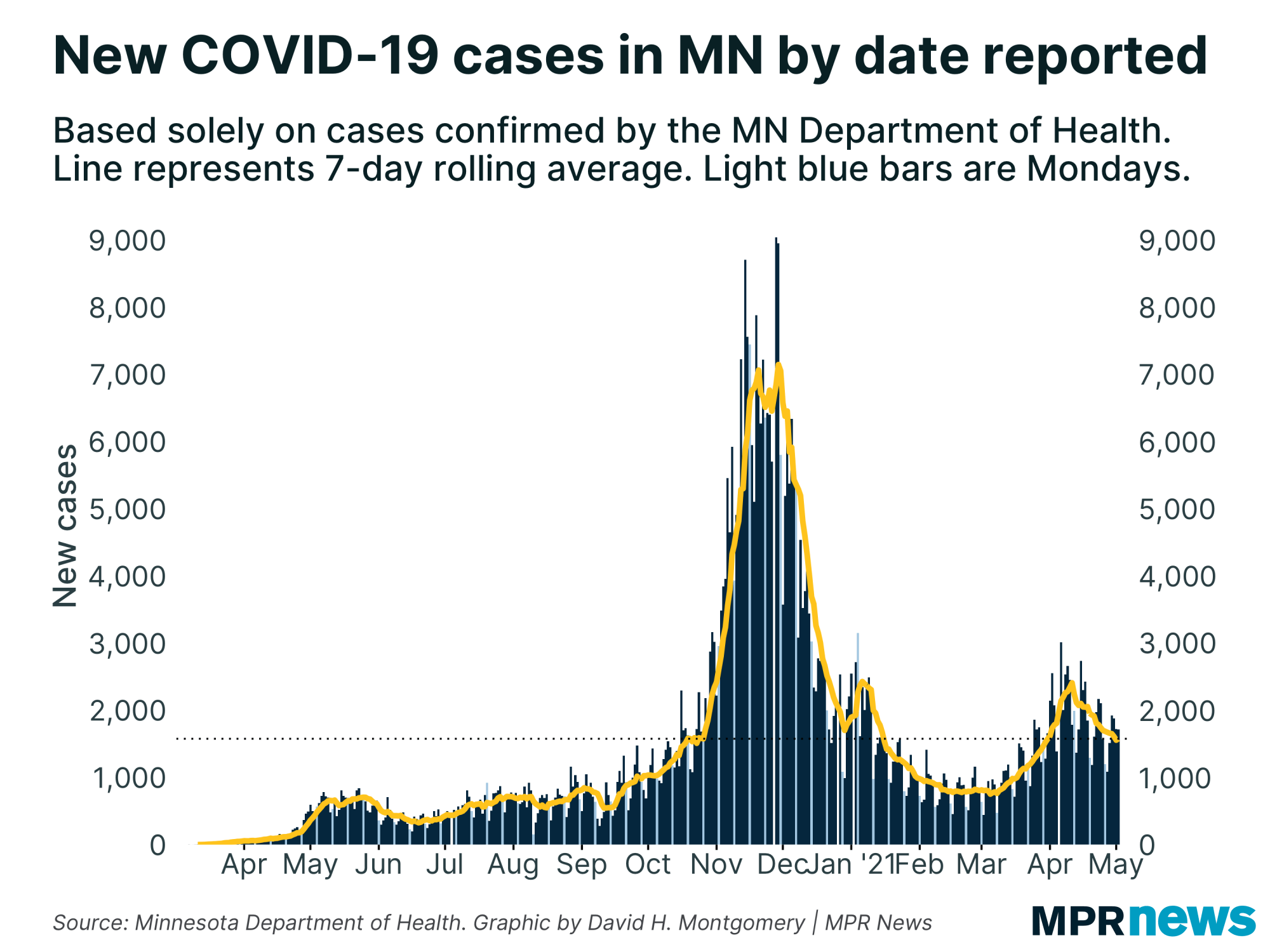 Regionally, all parts of Minnesota are in better shape than they were in late November and early December. Case counts had been creeping up the past few weeks across the state, but the trend appears to have peaked. 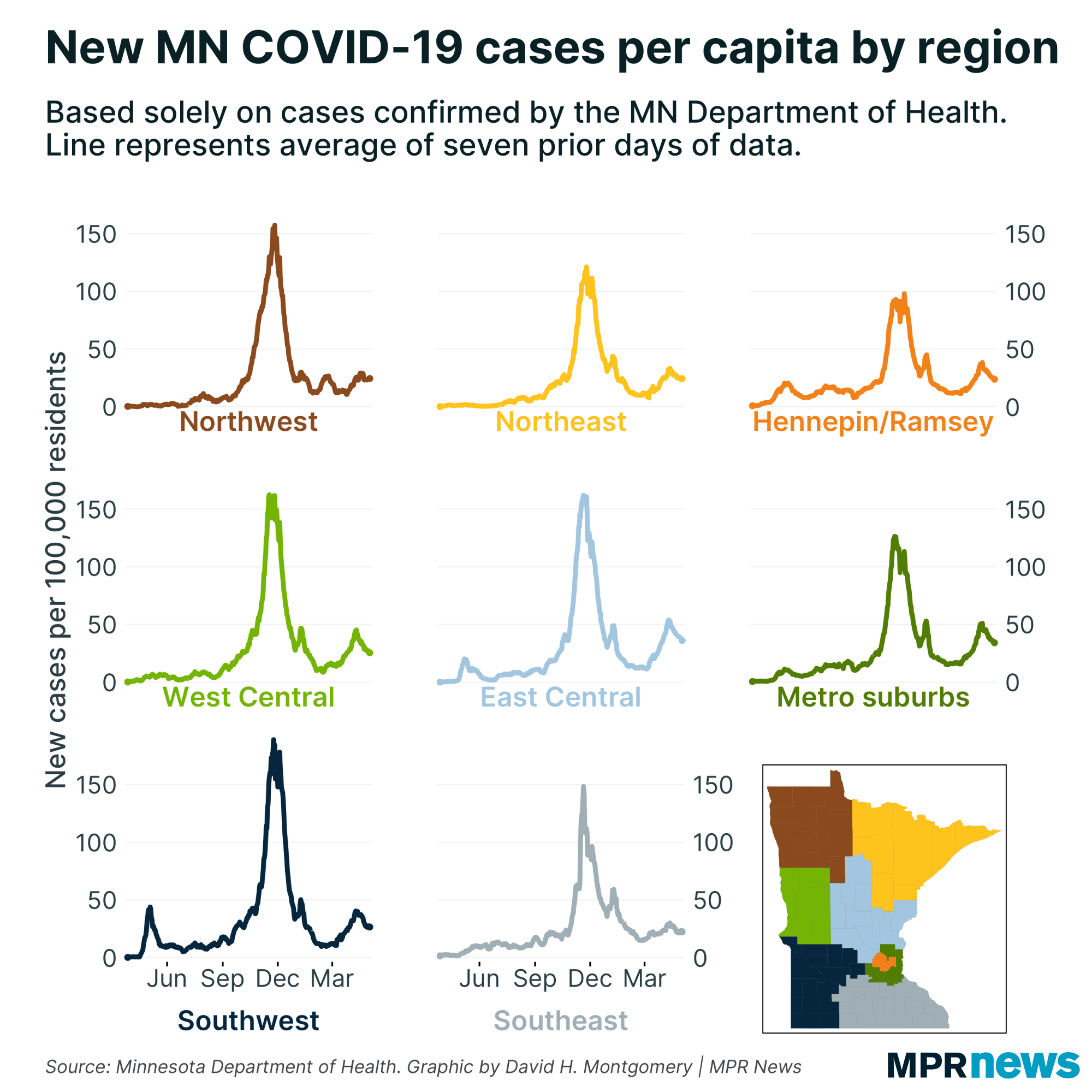 Minnesota’s vaccination pace has been slipping as officials work now to reach out to those who haven’t been vaccinated.

More than 2.5 million residents 16 and older now have at least one vaccine dose, and nearly 2 million have completed their vaccinations, as of Sunday’s update.

That works out to about 44.7 percent of the 16-and-older population completely vaccinated and 58.4 percent with at least one shot, including 87 percent of those 65 and older. 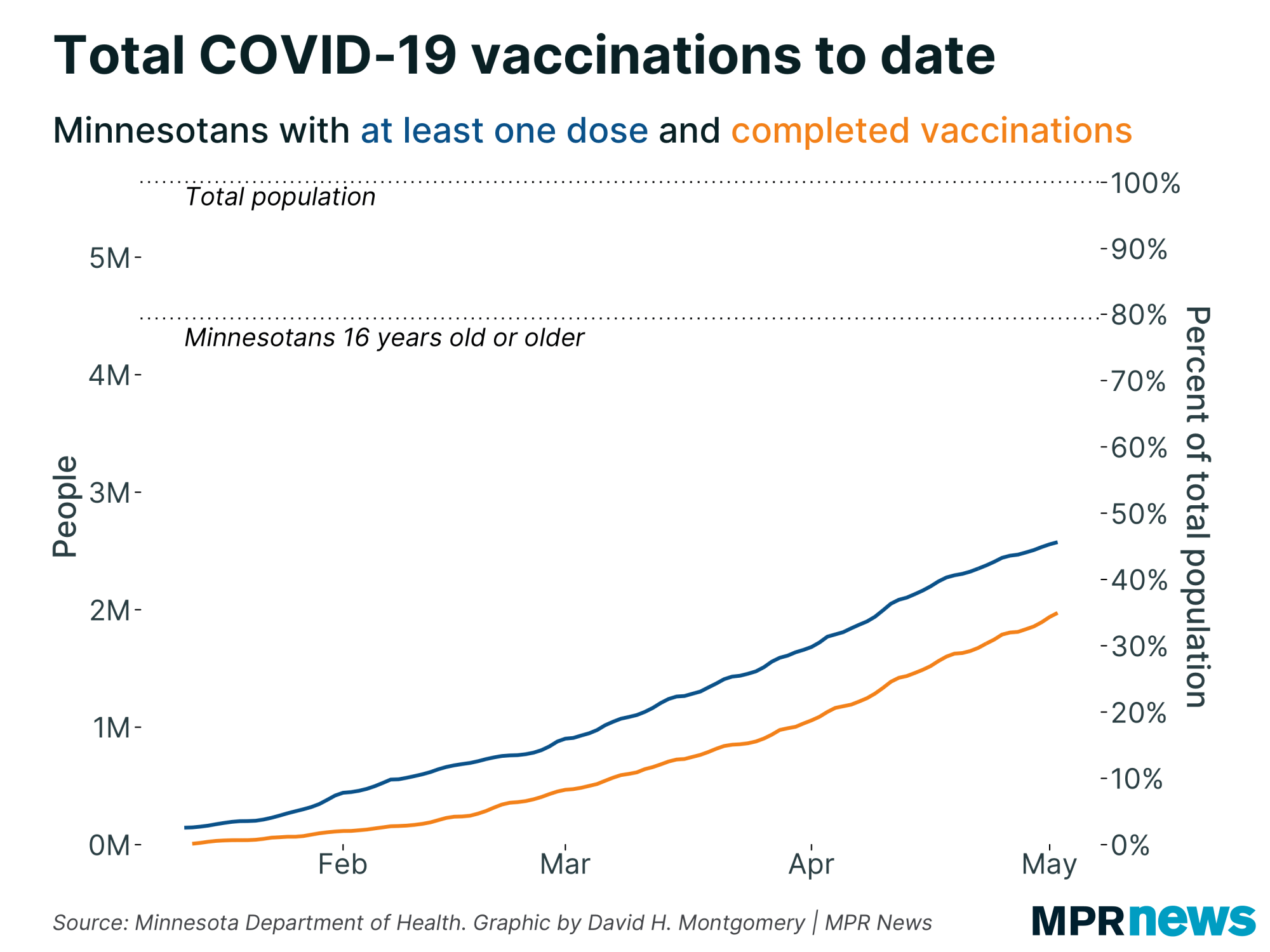 The state’s vaccination efforts have been hampered the past few weeks by supply cuts, particularly of the Johnson & Johnson vaccine, which federal authorities paused last month as they investigated the possibility of rare side effects associated with the shot.

The pace may pick up, after federal health officials lifted the pause on using the Johnson & Johnson vaccine. But the recent production breakdown that resulted in millions of J&J doses ruined is having an impact.

Officials also acknowledge the state must do more to connect unvaccinated people to shots.

The Health Department estimates about about 3.4 percent of Minnesotans who’ve received their first dose of a two-dose regimen are late for their second shot. Nationwide, about 8 percent of Americans have skipped out on their second dose, according to the Centers for Disease Control and Prevention. 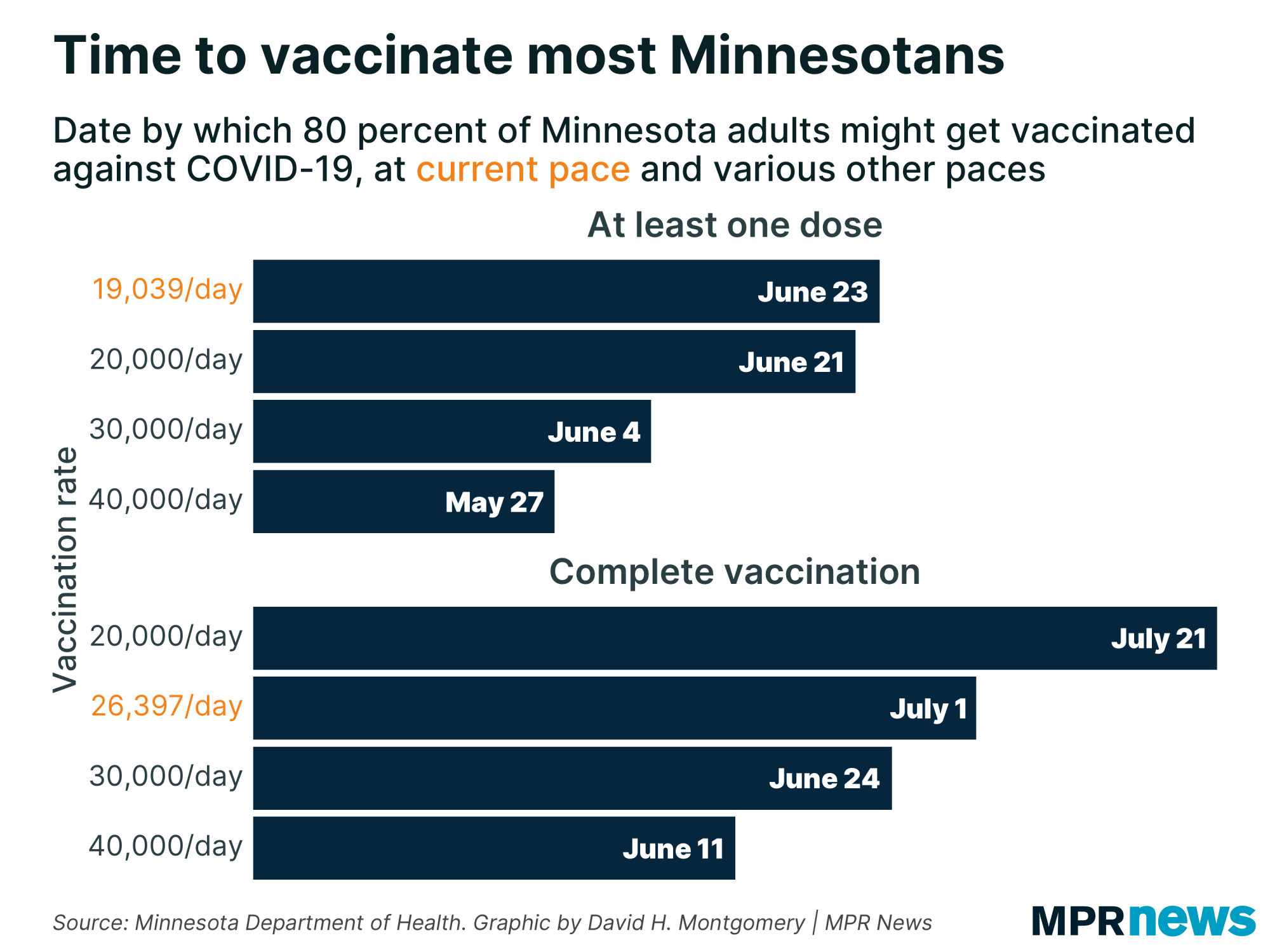 While the overall trends are solid, officials are increasingly concerned about the spread of COVID-19 in younger people. They’re urging more testing of middle and high school studentsand weekly testing for athletes, coaches, referees and other youth sports participants.

People in their 20s still make up the age bracket with the state’s largest number of confirmed cases — more than 106,000 since the pandemic began.

The number of high school-age youth confirmed with the disease has also grown, with more than 47,000 15-to-19-year-olds known to be infected during the pandemic.

Although young people are less likely to feel the worst effects of the disease and end up hospitalized, experts worry they will spread it unknowingly to older relatives and members of other vulnerable populations. Those with the COVID-19 virus can spread it when they don’t have symptoms.

People attending proms, graduations and other youth-oriented events are a special concern now for health officials.

The work by schools and districts to build safeguards into those events “can be completely undermined if students and parents don’t do their part, as well,” Kris Ehresmann, the state’s infectious disease director, told reporters last week.
Latest developments

The organizers of the Freeborn County Fair in Albert Lea say they're canceling this summer's fair — at least, in its usual form.

In a Facebook post they said uncertainty over what pandemic restrictions will look like this summer makes it too financially risky to book concerts and other entertainment.

Fair organizers said entertainment contracts for the fair add up to about $300,000, and there hasn't been any income from events at the fairgrounds over the past year.

"We understand that people want to get out and enjoy the fair, but planning for a successful fair at this time when there isn’t any guarantee the restrictions will be lifted, would jeopardize the fair for years to come," fair manager Mike Woitas said in the Facebook post.

Organizers said they'll still work with 4-H groups in Freeborn County to stage an event this summer where kids can show livestock and other projects.

County fairs all across Minnesota are weighing how to proceed this year after last summer's cancellations. Gov. Tim Walz said last week he's optimistic the Minnesota State Fair can be held this August in a close-to-normal way.

Minnesota businesses struggle with back-to-work plans:What will office space look like after the pandemic? Many businesses are grappling with that question right now as they contemplate bringing back employees who’ve worked remotely for more than a year. Open plan shared spaces may be the thing of the past and many people might be splitting their time between conventional workspaces and home offices.

Crunch time at MN Capitol collides with COVID fight: House and Senate negotiators have begun their search for compromises while top leaders aim to make the overarching deal they’ll need to draw the Legislature’s session to a close.

Marshall first-graders, parents grieve loss of classmate to COVID-19: School community members grieved the loss of a first-grader at Park Side Elementary School in Marshall, in southwestern Minnesota. Many families navigated the loss — and helped their children try to make sense of it.

To see the original reports and related stories, follow this link to the MPR News website. https://www.mprnews.org/story/2021/05/03/latest-on-covid19-in-mn
News