Child safe after getting into Twin Cities airport baggage system In this image from video obtained by MPR News, a child is seen in the baggage handling system at Minneapolis-St. Paul International Airport on Saturday. The boy was found uninjured.
Photo: Submitted

By Mark Zdechlik of Minnesota Public Radio News - May 2, 2021

A child made his way into the conveyer-belt baggage handling system at Minneapolis-St. Paul International Airport on Saturday.

Airport spokesperson Pat Hogan said the 9-year-old boy was not injured when police found him in the baggage system. Hogan said it happened early Saturday afternoon as a group of about 20 people were checking bags for a trip they were taking together.

“Among them was a 9-year-old child who dove onto the bag belt as it left the ticketing lobby to go down into where all the conveyors separate the bags to wherever they're going to go to the proper airplane," Hogan said. 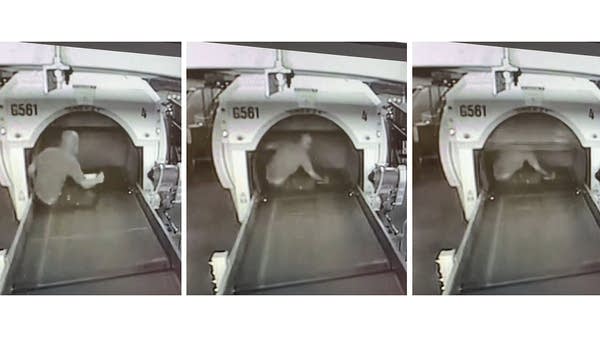 In this series of images from video obtained by MPR News, a child is seen in the baggage handling system at Minneapolis-St. Paul International Airport on Saturday. The boy was found uninjured. Photo: Submitted

Hogan said that initially, no one in the group noticed the boy was missing.

"There was a lot of confusion because there were so many people in the group," he said. "They were all checking their bags and putting their own bags on the conveyors, so it took a second for them to realize he was missing — but as soon as they did people sprang into action and the police were able to find him quickly."

A source with knowledge of the baggage system told MPR News the incident raises serious safety and security concerns.

Hogan, the airport spokesman, said the incident will likely lead to a review of baggage system security safeguards to see if more needs to be done to prevent a similar incident from happening again.

To see the orignal report and read related stories, follow this link to the MPR News website. https://www.mprnews.org/story/2021/05/02/child-safe-after-getting-into-twin-cities-airport-baggage-s...