Painter Mark Balma with two of his in-progress paintings from his Women of Faith project, which feature female characters from the Bible, the Koran and the Torah, in Minneapolis on March 11. Balma says these are still very much works in progress, and it is hard to get a full appreciation for the scope of the project without seeing all 10 images in place in the church.
Photo: Evan Frost | MPR News

Minnesota artist Mark Balma is drawing on ancient techniques to create three huge frescoes for a church in Italy. He planned to do the work on site, but the pandemic intervened. As he faced a modern challenge, he turned to an approach developed more than 2,000 years ago.

When the coronavirus halted international travel, a friend offered Balma the use of an undeveloped atrium in a new building in Uptown Minneapolis. The ventilation system is borderline deafening, but it's got big windows and great natural light.

"It's a good, probably 35-foot ceiling here, so it gives me a chance to work on them," he said.

"Them" are the first three of 10 portraits for the “Women of Faith” project. These are women from the Bible, the Koran and the Torah, the great books of the three Abrahamic religions. First up is Eve, looking directly at visitors with a subtle smile. Adam stands behind, a look of concern on his face.

The paintings are close to 20 feet tall. Balma needs a scissors lift to reach the higher levels . 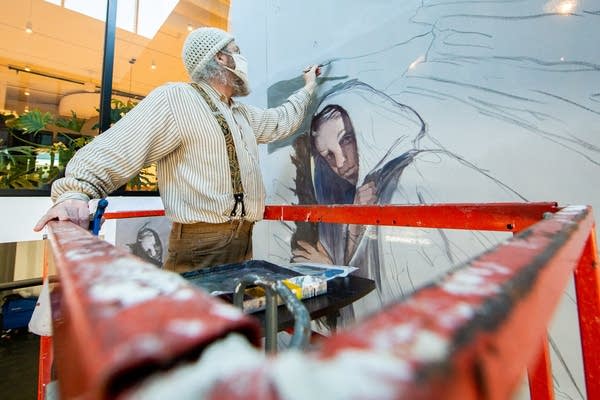 Mark Balma paints a 20-foot-tall portrait of Hagar as part of his Women of Faith project in Minneapolis on March 11. Balma has been painting inside of an undeveloped atrium in uptown with 35-foot ceilings offered to him by a friend.  Photo: Evan Frost | MPR News

Next to Eve, Balma is, on this day, working on a portrait of Hagar. She was second wife to Abraham, an enslaved woman who bore the prophet's children when his first wife, Sarah, was initially unable to have a child of her own.

"So her first son Ishmael was born, and here she is being visited in the desert by an angel" said Balma, standing before the second work. Muslim tradition holds the prophet Mohammed is a direct descendant of Ishmael.

The third image is a group portrait of Abraham, Sarah, with their son Isaac, born to Sarah when she was 90, as well as Hagar and Ishmael.

The pictures are destined for the Church of the Immaculate Conception in Terni, Italy, about 40 miles outside Rome. The pastor there is an American and approached Balma, a Minneapolis native internationally known for his portraiture, to create frescoes after a renovation. The priest also asked Balma to suggest a theme.

"Of course, the church is the Immaculate Conception Church and I said: Why not dedicate them to women?" Balma said.

“There has never been a cycle of frescoes dedicated to women like this, ever,” he said “So, it adds something new to the art in the church and also brings something back, old, from history, as the use of frescoes.”

As he embarked on the project, Balma sought advice from a multifaith committee which included Rabbi Marcia Zimmerman of Temple Israel in Minneapolis.

"My first thought is always the fact that he is not a woman," she laughs.

She gave Balma a collection of women's commentary on the weekly Torah portions, which are the foundation of Jewish worship services.

“A deeper understanding can only add to the process,” she said.

Balma described the book as eye-opening.

He also received advice from a Muslim perspective from Nadia Mohamed, a global religions professor at Minneapolis Community and Technical college. She is delighted the project examines common faith roots and the role of women now and into the future.

"We all know that we belong to Abraham, and from Abraham, came Judaism, Christianity and Islam,” she said. “Because men fail to bring us together, women, I think Muslim women, Christian women, Jewish women should bring us together and try to change." 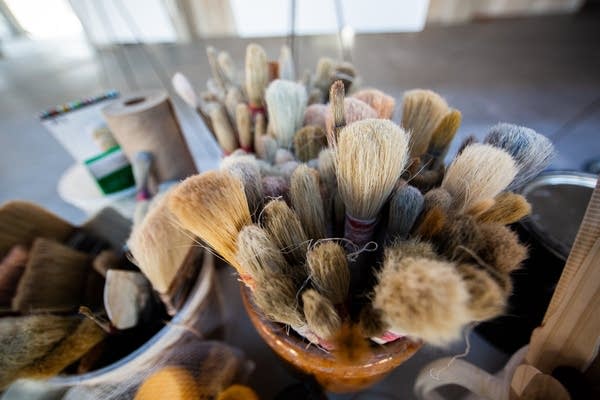 Paintbrushes used by Mark Balma throughout his career sit on a table near where he is working on his Women of Faith project in Minneapolis in March. Photo: Evan Frost | MPR News

This project poses challenges, not least that it's happening at a time when people are very conscious of how people are depicted. Balma said that is why he researched his subjects so deeply.

“I want to make these women look real for today,” Balma said. “And to feel real, like they could walk off the wall.”

Balma represents the women at different times of life. Eve is middle-aged, Hagar is young and Sarah is old.

Balma has also had to wrestle with logistical challenges. Remember: These are frescoes.

Fresco is the art of painting on wet plaster freshly applied to a wall. So how can Balma be creating frescoes in Minneapolis for walls almost 5,000 miles away? Well, by using an ancient Greek technique, that's how.

The Greeks didn't want to send skilled artisans far from Athens as travel in ancient times could be risky. So Balma says they learned to paint frescoes using lime-based paint on muslin sail-cloth which could be rolled up and delivered to a distant site. 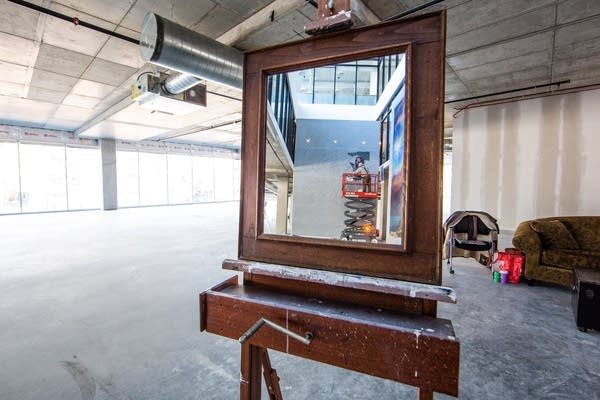 A mirror reflects painter Mark Balma using a scissor lift to work on one of the installments in his Women of Faith project in Minneapolis on Thursday, March 11, 2021. Three of the nearly 20-foot paintings will be hung in a church in Italy. Photo: Evan Frost | MPR News

"And then they glued these to the wall with a lime and cheese glue," said Balma, "So they became incorporated into the plaster."

Yes, he did say lime and cheese glue.

"You ever had ricotta, or cottage cheese? It's that slurry kind of thing and you mix that with lime," he said.

Pandemic allowing, Balma will install the first three pictures in Italy this summer. He'll complete the rest of the pictures over the following two years in Italy.

Mohamed said she has friends there who have offered to keep an eye on the project for her.

Zimmerman goes a step further. She said a sanctuary filled with images of women is very powerful.

But in the meantime, Balma has many miles, and many, many brushstrokes to go.

To listen to an audio version of this article and read related arts reporting, follow this link to the MPR News website.  https://www.mprnews.org/story/2021/04/27/minnesota-artist-uses-ancient-techniques-to-create-portrait...