Minnesota’s COVID-19 numbers continue to suggest the recent wave of new cases may have crested, but the race is still on to get more Minnesotans vaccinated.

Known, active cases came in at just over 16,000 in Wednesday’s state Health Department report — the lowest count in two weeks and down from Friday’s peak of just over 20,000.

Given the state’s vaccination push, officials didn’t expect this wave would match the 50,000 cases seen in the late November surge. But they’ve been anxious about the growth of COVID-19 variants and Minnesotans’ willingness to stay vigilant against the disease.

The percentage of COVID-19 tests coming back positive continues to trend down after a recent upswing. It’s still above the 5 percent threshold that public health leaders find concerning.

State Health Department data show more than 1.6 million Minnesotans have completed their full vaccine series — two doses of the Pfizer or Moderna vaccines or one dose of the Johnson & Johnson vaccine — while more than 2.3 million have at least one dose, including nearly 86 percent of residents age 65 and older. 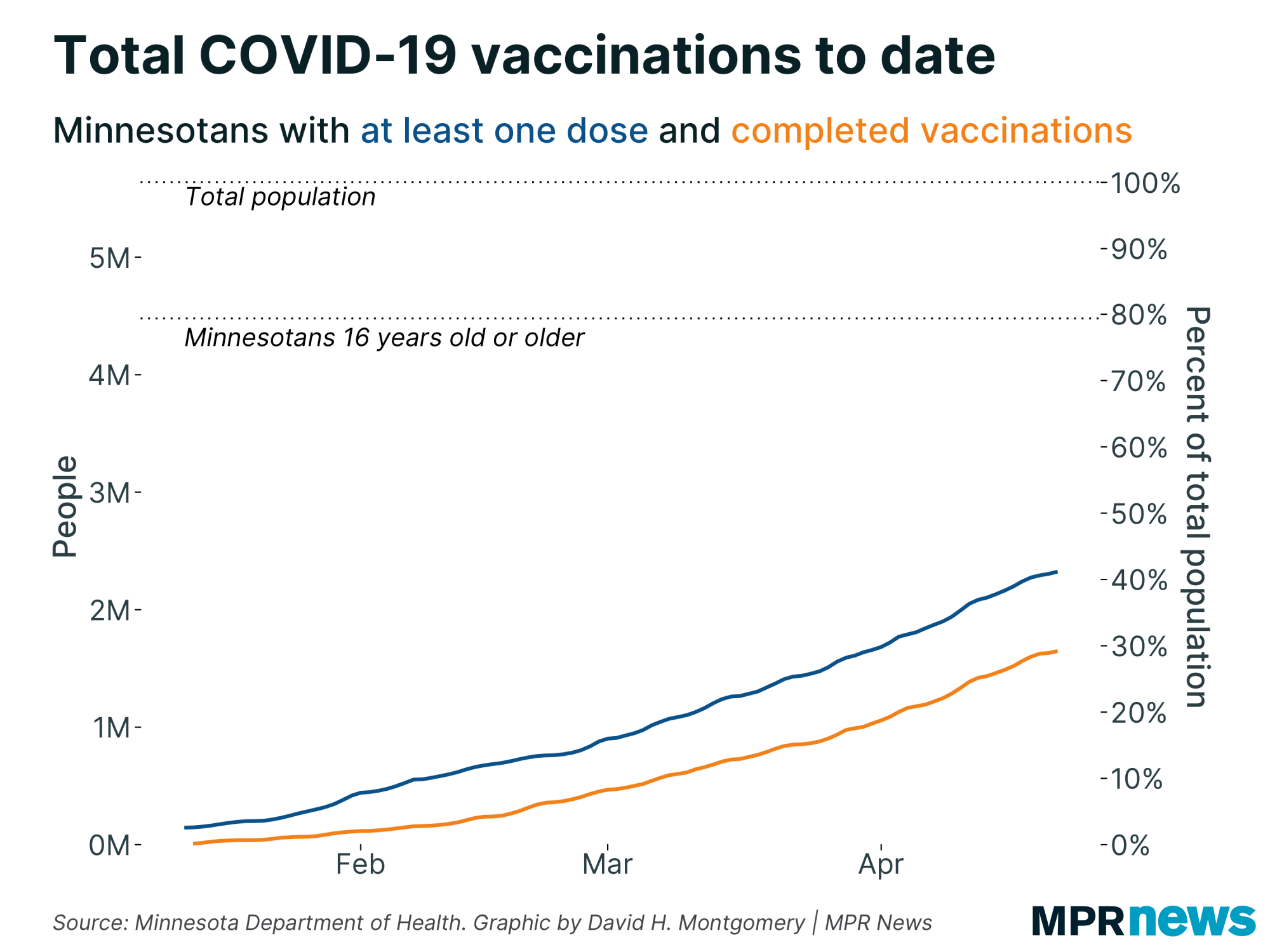 The state’s efforts have been hampered recently by supply cuts, particularly in the Johnson & Johnson vaccine, which federal authorities paused last week as they investigate the possibility of rare side effects associated with the shot.

Minnesota’s vaccination pace peaked at more than 40,000 first doses per day last week. Now, it looks like the state is headed for half that and may last for several weeks.

At about 27,000 first doses per day, the current rate, Minnesota is on track to finish vaccinating 80 percent of adults in early June. This had been mid-to-late May at the peak. 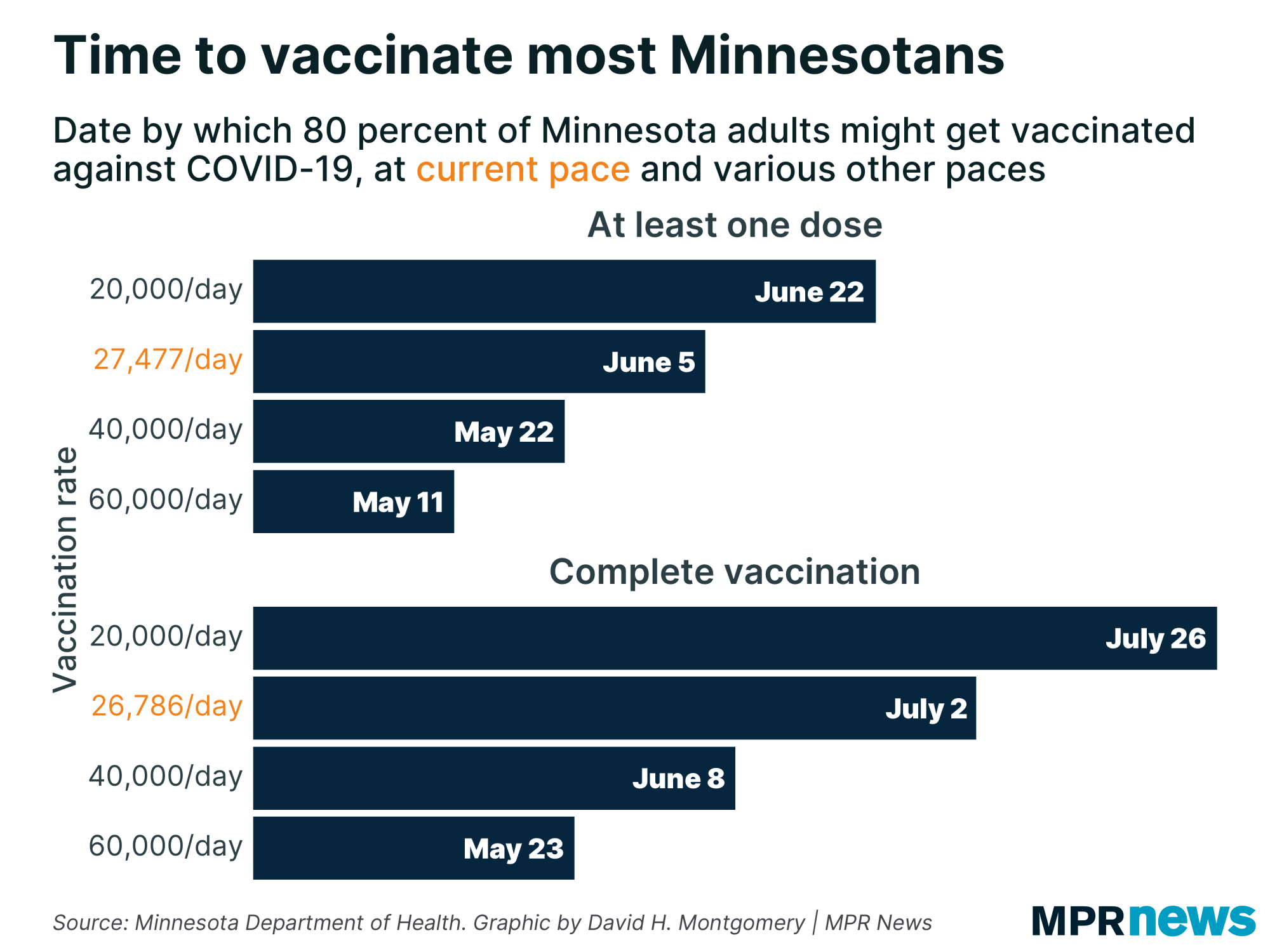 Supply still continues to outpace demand in some parts of the state.

On Tuesday, Mayo Clinic, which has locations throughout southern Minnesota, put a call out to media that it had too many spots. In a notice sent to the press, Mayo said that people who are not Clinic patients could sign up for a vaccine with them, as well as people who don’t live in Minnesota.

Metrics like hospitalizations and deaths often continue to rise or stay high for awhile even as active cases start to ebb. That’s the case in this wave.

Hospitalizations have climbed significantly over the past few weeks and are hovering at levels not seen since January. Health officials say coronavirus variants circulating in Minnesota are driving those increases.

Thirteen deaths reported Wednesday raised Minnesota’s overall pandemic death toll to 7,044. Among those who have died, about 62 percent had been living in long-term care or assisted living facilities; most had underlying health problems. 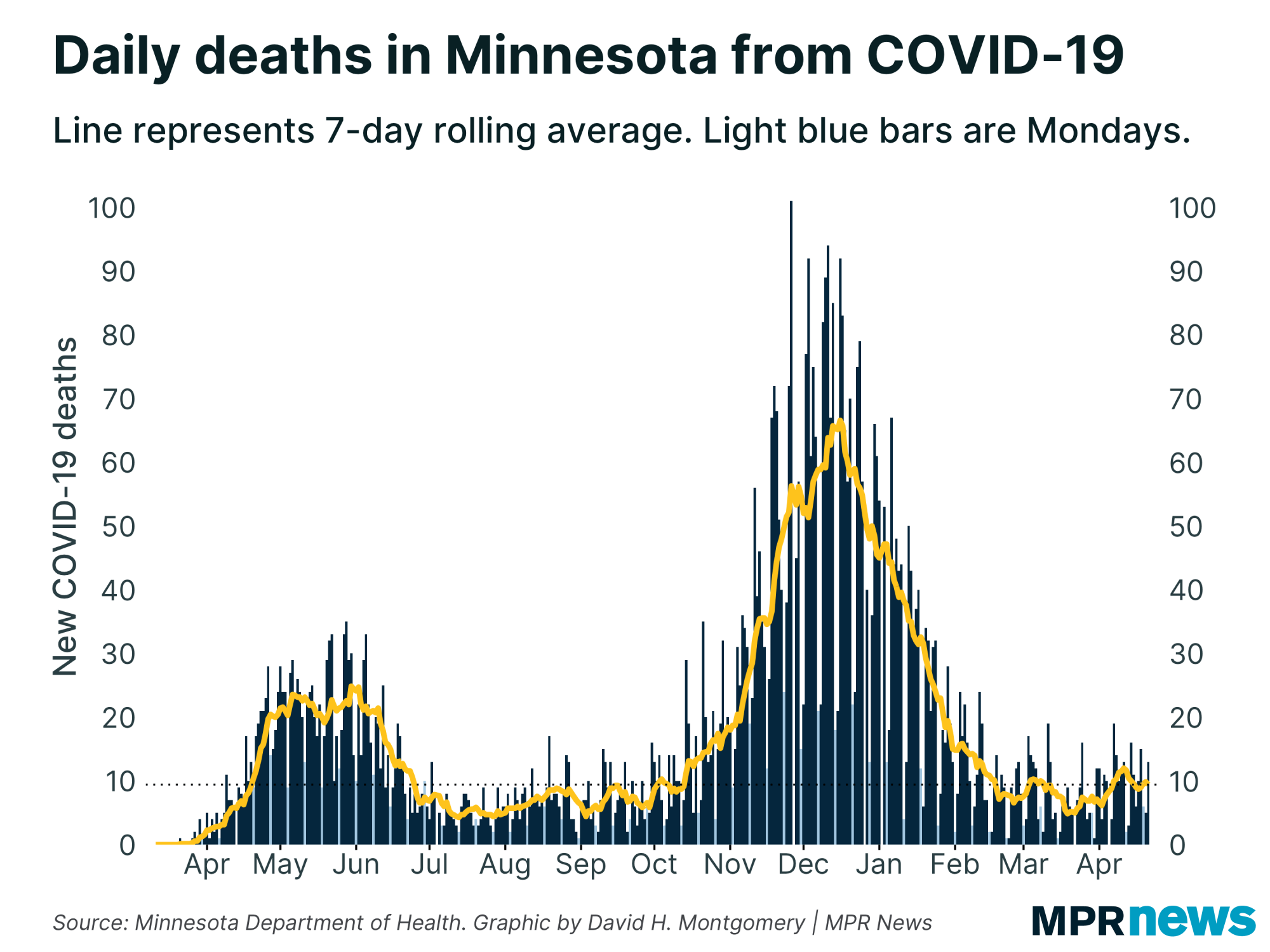 The state has recorded 560,450 total confirmed or probable cases so far in the pandemic, including the 1,611 posted Wednesday. About 95 percent of Minnesotans known to be infected with COVID-19 in the pandemic have recovered to the point where they no longer need to be isolated. 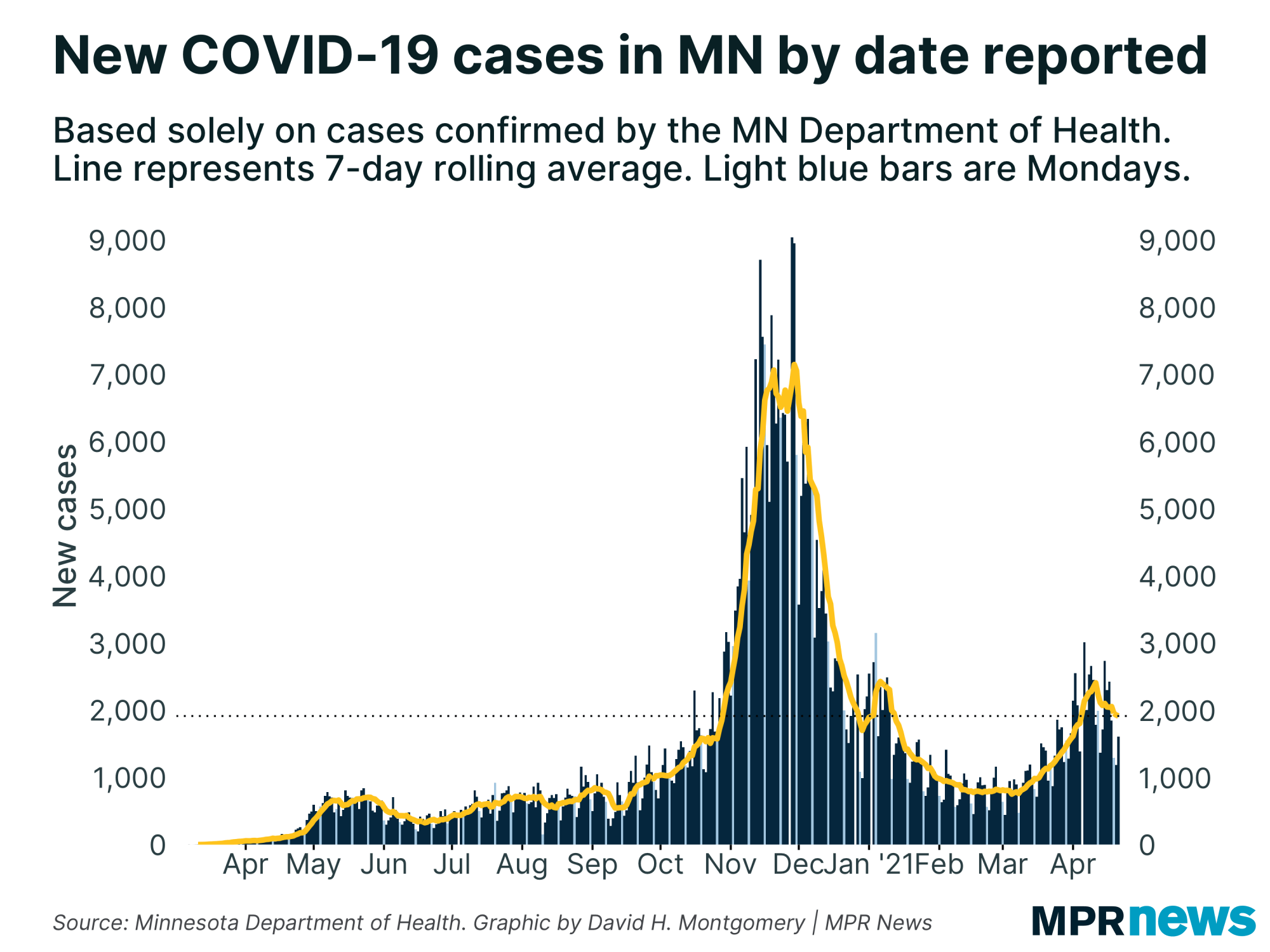 Regionally, all parts of Minnesota are in better shape than they were in late November and early December. Cases counts were creeping up the past few weeks across the state, but it appears to have mostly peaked. 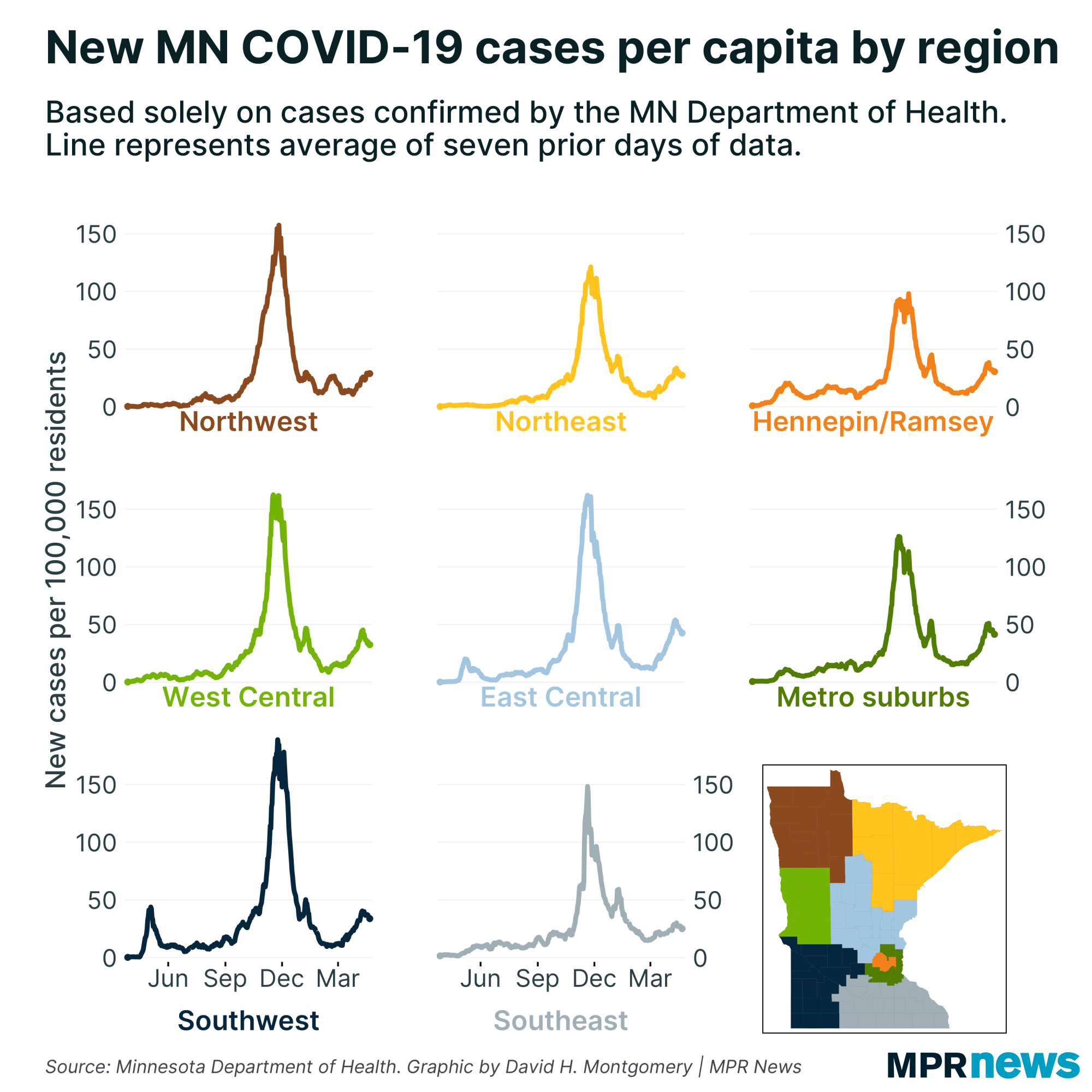 To read the original stories and more COVID-19 reporting in Minnesota, follow this link to the MPR News website.  https://www.mprnews.org/story/2021/04/22/latest-on-covid19-in-mn
News