Boards stand in front of the windows and doors of Minneapolis City Hall as layers of barbed wire covered fencing are installed on the sidewalk outside on Feb. 25 in Minneapolis. Security measures put in place before the Chauvin trial soon will come down. Photo: Stephen Maturen | Getty Images file

They’ve been most visible outside the Hennepin County Government Center in downtown Minneapolis, where Chauvin’s trial was held. A jury on Tuesday convicted the former Minneapolis police officer of murder and manslaughter for killing George Floyd.

Gatherings and marches in the city in the hours after the verdict were peaceful and celebratory.

Minnesota National Guard Adjutant General Shawn Manke said Wednesday that most soldiers and airmen will be gone by the end of the week.

"Their presence and visibility should be much less over the next few days,” Manke said. ”And we will continue to have soldiers on as we continue to prepare our equipment, reset it, so it's ready to go for the next mission, whether it be a federal mission or a state mission.” 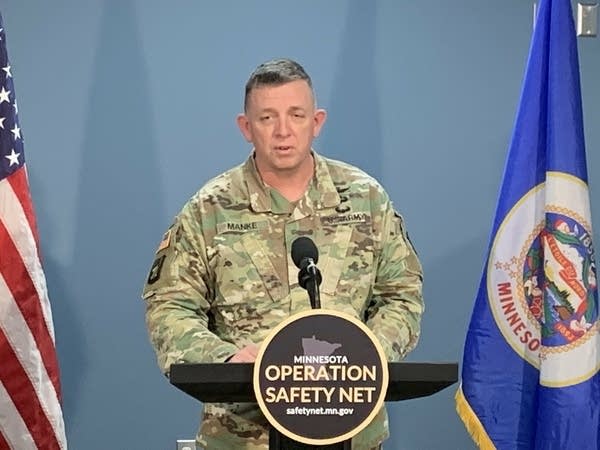 Gen. Shawn Manke says “vast majority” of the Minnesota National Guard personnel will be out of the Twin Cities by the end of the week.  Photo: Matt Sepic | MPR News

The Guard presence was part of Operation Safety Net, a multi-agency law enforcement effort aimed at preventing the widespread civil unrest and rioting that followed Floyd’s killing last May.

Hennepin County Sheriff Dave Hutchinson said that the concrete barricades, fencing and razor wire placed around public buildings ahead of jury selection will be removed as soon as crews can do the work.

"We will take those down within the next few days or weeks,” Hutchinson said. “It really depends on the contractors and their availability. We have to keep some safety measures in place until we feel comfortable." 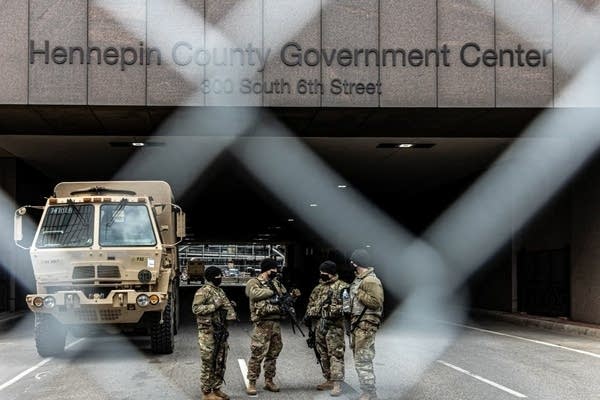 Members of the National Guard patrol behind a a security fence perimeter surrounding the Hennepin County Government Center, where the trial of former police officer Derek Chauvin was being held on March 31.  Photo: Kerem Yucel | AFP via Getty Images file

Officials said they're starting to plan security arrangements for the August trial of former officers Thomas Lane, J. Alexander Kueng, and Tou Thao, who are charged with aiding and abetting murder and manslaughter in Floyd’s death. Minneapolis police Chief Medaria Arradondo said the planning is in its early stages. He did not say if the security presence will be as robust as it was for the Chauvin trial.

Col. Matt Langer, who heads the Minnesota State Patrol, said 128 state troopers from Ohio and Nebraska brought in as “surge capacity,” are also leaving this week.

Operation Safety Net has come under heavy criticism after protests that followed the April 11 killing of Daunte Wright, a 20-year-old Black man, by a white Brooklyn Center police officer during a traffic stop. Kimberly Potter, 48, resigned from the department and is charged with manslaughter.

“Many” deputies sustained minor injuries during the confrontation, Hutchinson said, including one who suffered a broken nose after being hit by a brick.

U.S. District Judge Wilhelmina Wright issued a temporary restraining order on April 16, prohibiting police “from committing violent and threatening acts against journalists.” But within hours of Wright’s order, police detained and photographed a group of reporters and collected their personal information.

While covering protests in Brooklyn Center last week, Star Tribune photographer Mark Vancleave suffered a broken finger when he was hit by a police projectile. Freelance photographer Tim Evans said an officer punched him in the face as he tried to present his media credentials. And Minnesota state troopers threw Asian American CNN producer Carolyn Sung to the ground, zip-tied her wrists, and asked, “Do you speak English?” Sung’s primary language is English. Sung was held in the Hennepin County jail before attorneys were able to secure her release.

To see the original report and read related stories, follow this link to the MPR News website.  https://www.mprnews.org/story/2021/04/21/minnesota-guard-troops-standing-down-as-twin-cities-are-qui...