Former Vice President Walter F. Mondale, credited with expanding the office of the vice president and the first presidential candidate to choose a woman as running mate, died Monday in Minneapolis. He was 93.

Mondale’s death was announced in a statement from his family. No cause was cited.

He followed the trail blazed by his political mentor, Hubert H. Humphrey, to the vice presidency, serving under President Jimmy Carter from 1977 to 1981. 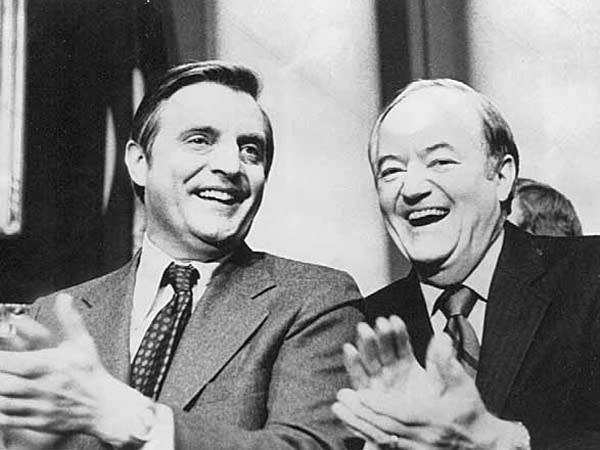 "I think the relationship between President Carter and Vice President Mondale was as solid as any president-vice presidential relationship that I'm aware of in history,” Walch said. “Both had the right spirit of collaboration, and both had mutual respect for one another's skills." 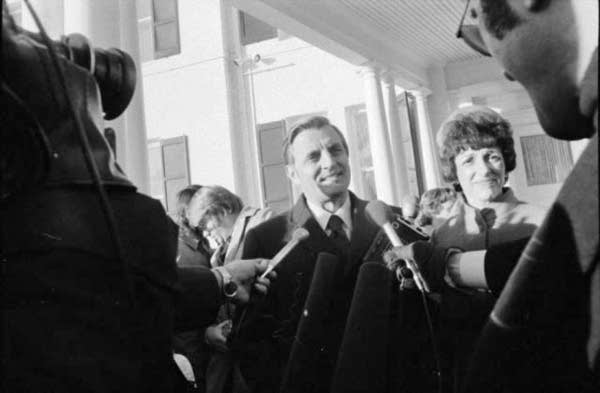 Walter Mondale, accompanied by Joan Mondale, speaks to reporters on the day of his inauguration as vice president.  Photo:  Minnesota Historical Society

In 1984, Democrats put Mondale at the top of the ticket. He lost 49 states to President Ronald Reagan, carrying only his home state of Minnesota and the District of Columbia. Experts say Mondale’s promise to raise taxes, made during a nationally televised debate with Reagan, helped sink the Minnesotan’s presidential hopes.

The campaign, though, would be remembered for more than just that debate soundbite. A week before the Democratic National Convention he named New York Rep. Geraldine Ferraro as his running mate. It was the first time a woman would be on a major-party presidential ticket.

"There isn't a minute that you can turn around and say this man is focused on himself and what is important to his future. He always thought of others," Ferraro said in an interview just before her death in 2011. 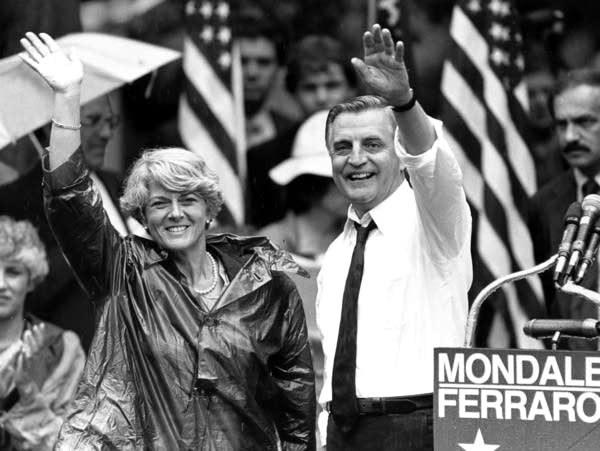 Years later, Mondale said his campaign message had proven to be the right one.

“History has vindicated me that we would have to raise taxes,” he said. “It was very unpopular, but it was undeniably correct.”

In 2002, state and national Democrats looked to Mondale, when Sen. Paul Wellstone, D-Minn., and seven others, including Wellstone’s wife and daughter, were killed when their campaign plane crashed near Eveleth, Minn., less than two weeks before Election Day.

Mondale agreed to stand in for Wellstone, and early polls showed him with a lead over the Republican candidate, Norm Coleman.

But the 53-year-old Coleman, emphasizing his youth and vigor, out-hustled the then-74-year-old Mondale in an intense six-day campaign. Mondale was also hurt by a partisan memorial service for Wellstone, in which thousands of Democrats booed Republican politicians in attendance. One speaker pleaded: “We are begging you to help us win this election for Paul Wellstone.”

“The eulogizers were the ones hurt the most,” Mondale said after the election. “It doesn’t justify it, but we all make mistakes. Can’t we now find it in our hearts to forgive them and go on?”

It was a particularly bitter defeat for Mondale, who even after his loss to Reagan had taken solace in his perfect record in Minnesota.

“One of the things I’m most proud of,” he said in 1987, “is that not once in my public career did I ever lose an election in Minnesota.”

Mondale returned to practicing law in Minneapolis and teaching at the University of Minnesota. He headlined a lecture series and gave interviews about public policy. But it wasn't until 2006 that Mondale finally agreed to talk at length about himself. 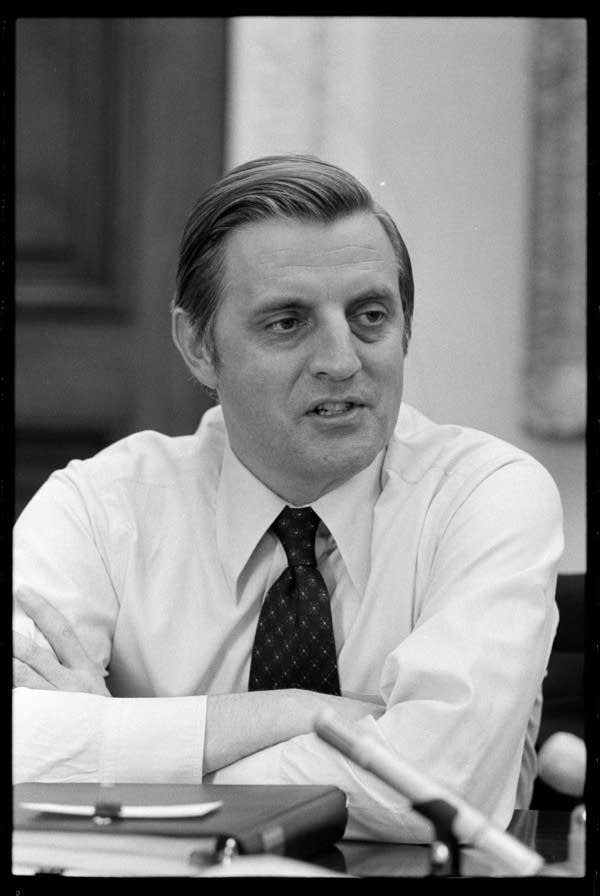 Near the end of an hourlong interview, MPR host Gary Eichten asked Mondale to name his greatest achievement in public life. He answered that it was his time as Carter’s vice president.

"We told the truth, we obeyed the law, and we kept the peace."

Walter Mondale said he hoped Americans would remember him simply as a decent person who tried his best to do the right thing.

Years after the 2002 defeat, Mondale returned to the Senate to stand beside Democrat Al Franken in 2009 when he was sworn in to replace Coleman after a drawn-out recount and court battle.

Mondale started his career in Washington in 1964, when he was appointed to the Senate to replace Humphrey, who had resigned to become vice president. Mondale was elected to a full six-year term with about 54 percent of the vote in 1966, although Democrats lost the governorship and suffered other election setbacks. In 1972, Mondale won another Senate term with nearly 57 percent of the vote.

His Senate career was marked by advocacy of social issues such as education, housing, migrant workers and child nutrition. Like Humphrey, he was an outspoken supporter of civil rights.

Mondale tested the waters for a presidential bid in 1974 but ultimately decided against it. “Basically I found I did not have the overwhelming desire to be president, which is essential for the kind of campaign that is required,” he said in November 1974.

As a U.S. senator in 1975, Mondale pushed through a key rule change that cut the number of votes needed to end a filibuster from 67 to 60.

In 1976, Carter chose Mondale as No. 2 on his ticket and went on to unseat Gerald Ford. 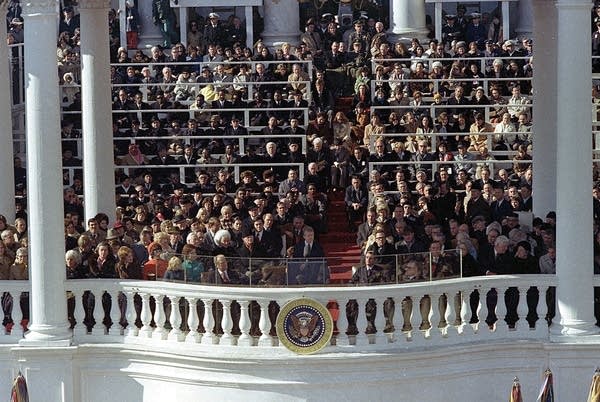 Jimmy Carter makes his inaugural address as the 39th President of the United States during ceremony on the East Front of the Capitol in Washington, D.C., on Jan. 20, 1977. Seated to his left is outgoing President Gerald Ford. Seated at right is Vice President Walter F. Mondale.
Photo: Associated Press

As vice president, Mondale had a close relationship with Carter. He was the first vice president to occupy an office in the White House, rather than in a building across the street. Mondale traveled extensively on Carter’s behalf, and advised him on domestic and foreign affairs.

While he lacked Humphrey’s charisma, Mondale had a droll sense of humor.

When he dropped out of the 1976 presidential sweepstakes, he said, “I don’t want to spend the next two years in Holiday Inns.” 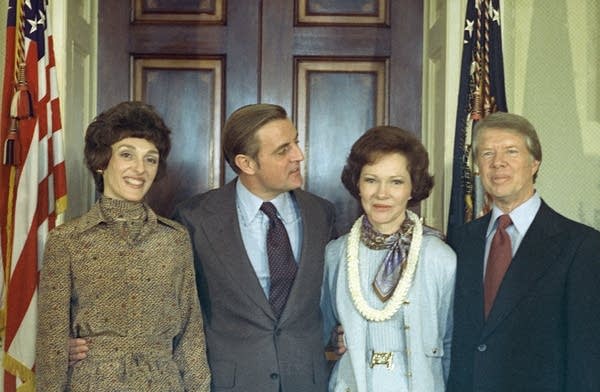 Reminded of that shortly before he was picked as Carter’s running mate, Mondale said, “I’ve checked and found that they’re all redecorated, and they’re marvelous places to stay.”

Mondale never backed away from his liberal principles.

“I think that the country more than ever needs progressive values,” Mondale said in 1989.

That year, Democrats tried to persuade him to challenge Minnesota GOP Sen. Rudy Boschwitz, but he decided against making the race, saying it was time to make way for a new generation.

“One of the requirements of a healthy party is that it renews itself,” he said at the time. “You can’t keep running Walter Mondale for everything.”

That paved the way for Wellstone to win the Democratic nomination, and go on to upset Boschwitz. Wellstone had been preparing to take on Mondale in a primary but would have been a heavy underdog.

The son of a Methodist minister and a music teacher, Walter Frederick Mondale was born Jan. 5, 1928, in tiny Ceylon, Minn., a small town near the Iowa border and grew up in several small southern Minnesota towns.

Mondale was of Norwegian stock, but the town was largely German. From an early age his middle name Frederick morphed into "Fritz" — a nickname that stuck. 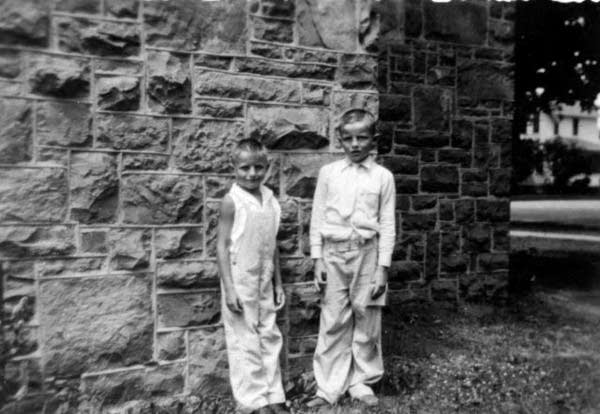 Walter Mondale (left) stands with his brother beside a stone wall in a photograph from 1935.
Photo courtesy Minnesota Historical Society

In the Mondale home two things were strictly forbidden — lying and bragging. In a 2009 interview, Mondale said religion was a big part of his upbringing and it influenced his liberal politics.

"The idea that the Christian faith required attention to the least of these and that justice was a part of our faith, that had a lot to do with it,” he said. “We got it over breakfast, we got it over lunch, being a preacher's kid you had to go all the services, the prayer meetings, had to go to choir practice, it was heavy duty, but you got the message after a while."

These ideas were no doubt on the 18-year-old's mind in 1946, when a Macalester College political science instructor took him to a Minneapolis hotel, where Humphrey, a fiery young mayor, was rallying support for his reelection bid.

"Hubert just blew me away. Brilliant, but he had this second engine on him. He never got tired. And for a young person, that was really wonderful to watch," Mondale said.

Too young to vote, Mondale nevertheless volunteered for the campaign, trudging through the late winter snow and slush to ring doorbells and hand out pamphlets.

He was only 20 when he served as a congressional district manager for Humphrey’s successful Senate campaign in 1948. His education, interrupted by a two-year stint in the Army, culminated with a law degree from the University of Minnesota in 1956.

Mondale began a law practice in Minneapolis and ran the successful 1958 gubernatorial campaign of Democrat Orville Freeman, who appointed Mondale state attorney general in 1960. Mondale was elected attorney general in the fall of 1960 and was reelected in 1962.

Following complaints about a furnace repair scam, Mondale became an early consumer advocate. Without a consumer protection statute on the books in Minnesota at the time, he sued the company under a public nuisance law, driving it out of business in the state.

He also had a supporting role in a landmark U.S. Supreme Court case. Mondale helped organize other state attorneys general to draft a friend of the court brief arguing that a Florida man named Clarence Gideon should have his felony burglary conviction overturned because the state refused to pay for a defense attorney.

The justices cited Mondale's brief as a factor in their unanimous ruling requiring states to provide defense attorneys to defendants who can't afford legal counsel.

After his White House years, Mondale served from 1993-96 as President Bill Clinton’s ambassador to Japan, fighting for U.S. access to markets ranging from cars to cellular phones.

He helped avert a trade war in June 1995 over autos and auto parts, persuading Japanese officials to give American automakers more access to Japanese dealers and pushing Japanese carmakers to buy U.S. parts.

Mondale kept his ties to the Clintons. In 2008, he endorsed Sen. Hillary Rodham Clinton for president, switching his allegiance only after Barack Obama sealed the nomination.

When Democrats came to him after Wellstone’s death, Mondale was working at the Minneapolis law firm of Dorsey & Whitney and serving on corporate and nonprofit boards. He returned to the firm after the brief campaign.

In 1955, Mondale met Joan Adams on a blind date and married her. During his vice presidency, she pushed for more government support of the arts and gained the nickname “Joan of Art.” She had minored in art in college and worked at museums in Boston and Minneapolis.

The couple had two sons, Ted and William, and a daughter, Eleanor. Eleanor Mondale became a broadcast journalist and TV host, with credits including “CBS This Morning” and programs with E! Entertainment Television. She died of cancer at age 51 in 2011. Ted Mondale served six years in the Minnesota Senate and made an unsuccessful bid for the Democratic nomination for governor in 1998. William Mondale served for a time as an assistant attorney general.

Joan Mondale died in 2014 at age 83 after an extended illness.

To see the original report and related stories, follow this link to the MPR News website.  https://www.mprnews.org/story/2021/04/19/vice-president-walter-mondale-dies-at-93